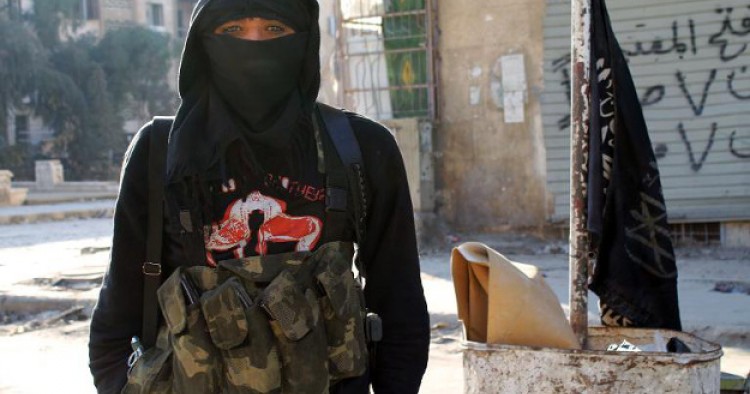 Osama bin Laden may be dead, but his ghost was in Riyadh the other day, hovering over Saudi Arabia’s King Abdullah as he issued a decree making it a crime for any Saudi citizen to take part in a war outside the kingdom.

The obvious motivator was the civil war in Syria, where hundreds of young Saudis have been spotted in the ranks of the most radical jihadi groups battling both the government and other less extreme rebels. But the roots of the king’s action, and the problem it was designed to address, can be traced to the 1980s war against the Soviet occupation of Afghanistan.

In that conflict, the Afghan mujahidin were joined by units of religiously-motivated young Arabs, who saw themselves as soldiers of Allah struggling against an atheistic enemy. When that war ended in victory, these so-called “Afghan Arabs” returned to their home countries, including Saudi Arabia, energized by their cause, experienced in battle, and looking for new targets. The best-known of these militants was Osama bin Laden, and the target he chose was the al-Saud monarchy.

Bin Laden himself was sent into exile, but his acolytes, branding themselves al-Qa`ida in the Arabian Peninsula, began an armed uprising against the government in 2003. The insurrection eventually failed, but the kingdom’s rulers, who had encouraged the Afghan Arab movement, learned a harsh lesson: jihadis wage jihad, at home if not abroad.

This issue surfaced during the U.S.-led war in Iraq, when the Saudi government struggled to discourage young men from joining forces with Sunni militias, fearing what would happen when they came home. Now this phenomenon has metastasized in Syria, where there is no end in sight to the war. Restless young Saudi men, with few job prospects at home, have found it appealing to travel to Syria via Jordan or Turkey to join the ranks of the militants. Reports that Egyptian fighters who had been in Syria were attacking security forces in their home country validated Saudi fears of blowback.

The Saudi government has openly supported some of the Syrian rebels, and has been criticized for what appeared to be half-hearted or insincere attempts to keep the would-be warriors at home. Jamie Dettmer wrote for the Daily Beast, for example, that, “Saudi Arabia is playing a dangerous double game—turning a blind eye to the jihadists flocking from Riyadh to Syria while assuring the West of its commitment to fighting terror.”[1] Another article mentioned that the Saudis were going to Syria “with tacit approval from the House of Saud and financial support from wealthy Saudi elites.”[2] The New York Times reported last month that although Saudis were officially prohibited from going to Syria, “the ban is not enforced.”[3]

In December, the United States cut off non-lethal aid to Syrian rebels that it had been supporting because of concerns about rising extremist violence in the country. It might be difficult for King Abdullah to meet President Obama next month as scheduled with the issue of Saudi participation in the extremist groups hanging over him, especially since some of the jihadi bands in Syria have shown themselves to be so extreme and violent that even the leadership of al-Qa`ida has disavowed them. The king and the president have enough disagreements to address without adding this one.

In issuing his decree, which as usual for such documents included Qur'anic verses to show that it was based on the principles of Islam, the king did not specify any country. He said it was aimed at misguided people who were “targeting security, stability, tranquility and public tranquility and damaging the status of the Kingdom at the Arab, Islamic and international levels as well as its relations with other countries…”[4]

The decree establishes prison terms of three to 20 years for any Saudi citizen “participating in hostilities outside the Kingdom, in any way.”[5] The same sentences are to be applied to those joining or supporting “radical religious or intellectual currents or groups, and the like, or those classified as terrorist organizations internally, regionally or internationally, or supporting or adopting its ideology or approach in any way, or vowing sympathy with it.”[6] If the offender is a member of the armed forces, the penalty range rises to five to 30 years.

The king ordered the Ministries of Justice, Interior, Foreign Affairs and Islamic Affairs to draw up a list of groups that will be covered. When the law takes effect next month after publication in the official gazette, the king ordered, the Ministry of Interior is to “submit to us without delay the occurrence of arrests, apprehensions, investigation, and prosecution on the crimes mentioned.”[7]

It is always possible in Saudi Arabia that such a law could be used to stifle domestic dissent: anyone getting out of line could be accused of sympathizing with groups that jeopardize “tranquility,” and thrown into prison. But the Saudi government already has plenty of laws it can use to lock up dissidents, and it often does so. It is more likely that the new law reflects a genuine anxiety among the kingdom’s leaders about the potential for trouble when fighters come home from Syria, and about the outside world’s suspicion of their motives.

[5] "Royal Order: Participants in Hostilities Outside the Kingdom Receive 3-20 Years."

[6] "Royal Order: Participants in Hostilities Outside the Kingdom Receive 3-20 Years."

[7] "Royal Order: Participants in Hostilities Outside the Kingdom Receive 3-20 Years."