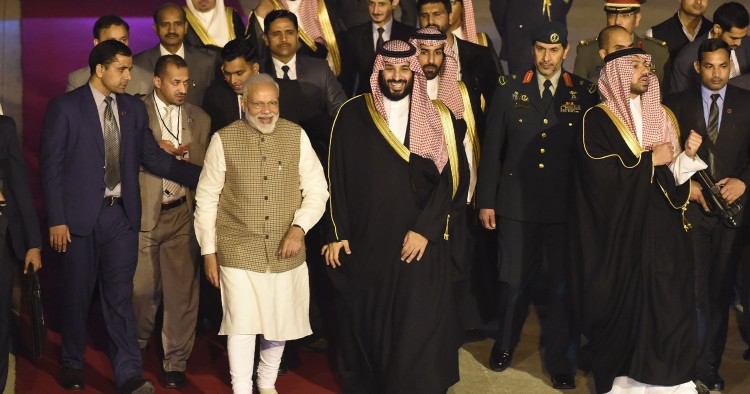 Saudi Crown Prince Mohammed bin Salman (MBS) has wrapped up another round of checkbook diplomacy, showering up to $100 billion on Pakistan, India, and China during his visit to the three countries in late February.

The trip was important for another reason as well: It showcased a new Saudi strategy of playing a more assertive foreign-policy role far beyond the Middle East. With demand for petrochemicals expected to rise significantly in the next five years, much of the investment the Saudis announced during the trip was for petrochemical projects.

The checkbook diplomacy makes perfect sense, given that China and India will account for the largest growth in demand for oil and gas — the kingdom’s main source of income — in the mid to long term. The two Asian countries are also the largest buyers of crude from Iran, Saudi Arabia’s main Middle East rival.

That made the timing of the trip noteworthy. When the Trump administration slapped sanctions on Iranian crude exports last year, it gave China and India exemptions so they would have time to switch to other suppliers. MBS’s journey east came just a month before the U.S. sanctions waivers are set to expire.

Saudi Arabia began looking toward Russia and China to hedge its national security interests after the Obama administration negotiated the 2015 Iran nuclear deal, which lifted long-running economic sanctions against the Islamic Republic. Although the Trump administration subsequently pulled out of the deal, the kingdom learned an important lesson — and it is continuing to cultivate political and economic ties with other powers as a result.

Geopolitics is not the only reason for Saudi Arabia’s pivot to Asia, however. Another is structural shifts in the oil and gas industry. Demand for petrochemicals will surge in the next five years, the International Energy Agency forecasts. Global oil demand is expected to rise by 6.9 million barrels per day by 2023, the agency said, and petrochemical products will account for a quarter of the growth. So it was no coincidence that the refinery and petrochemical sectors accounted for the lion’s share of the investment agreements signed during MBS’s trip. The investments also fit Saudi Aramco’s strategy of acquiring more assets abroad and boosting its petrochemical holdings before it issues a long-awaited public offering of its shares.

The $20 billion worth of investment agreements that the crown prince signed in Pakistan included the construction of an oil refinery and petrochemical complex in the southern port city of Gwadar. While Saudi Arabia is pursuing its own economic interests in Gwadar, the investment will bolster Beijing’s aspiration of playing a bigger role in the region. That’s because the port city is as an integral part of China’s One Belt, One Road initiative to integrate countries in the region politically and economically. The China-Pakistan Economic Corridor is both the most important link in this strategy and the biggest project under the initiative’s banner, and it is crucial to China’s plans to use Central Asia and Pakistan to help develop its poorer, restive western province of Xinjiang. China began sending goods overland to Gwadar for transshipment in late 2018.

Meanwhile, Saudi Arabia has shown an interest in acquiring two electricity-generating plants in Pakistan powered by liquefied natural gas (LNG). At first glance, it seems like a curious move. Qatar, with which Saudi Arabia has been feuding since 2017, is the largest supplier of the LNG to the plants. But Saudi Arabia is also investing in the Turkmenistan-Afghanistan-Pakistan-India pipeline project, which would send gas to Gwadar, and the door is open for Saudi Arabia to supply gas to the plants down the road. One sign is that Pakistan’s new government wants to renegotiate the price of the Qatari LNG before the current 10-year contract ends.

The Saudi crown prince’s visit to India did not yield any new agreements. That could have been expected because in 2018 Saudi Aramco signed a $44 billion deal to develop a huge refinery and petrochemical operation on India’s west coast in conjunction with three Indian state-owned energy firms. The two sides pledged during MBS’s visit to try to speed up work on the refinery complex.

In China, Saudi Aramco signed an agreement to form a joint venture with Norinco, a state-owned defense conglomerate, to build a $10 billion integrated refinery and petrochemical complex in northeastern Liaoning Province. Saudi Aramco already has a joint refinery venture in the southern city of Fujian. A key reason it wants a larger footprint in China’s refining and petrochemicals industries is to ward off growing competition from Rosneft. The Russian energy giant has taken advantage of its proximity to China and Saudi Arabia’s large oil production cuts under the OPEC+ agreement to sell more crude to China than Saudi Aramco. In a cagey move, the Saudis stipulated that the crude for the petrochemical joint venture with Norinco come from Saudi Arabia.

Looking beyond the Middle East

Saudi Arabia has embarked on an assertive new foreign policy whose centerpiece is an effort to play a bigger role in geopolitics far from the Middle East. This broader role carries with it both challenges and responsibilities. For example, MBS’s visit to Asia coincided with a conflict between Pakistan and India over Kashmir. The crown prince fell back on the Saudis’ traditional role of conciliator by calling for the rivals to ratchet down tensions. But the new challenge Riyadh suddenly faced was trying to come up with a coherent foreign policy toward two rival, nuclear-armed states. Another dilemma is what to do about China’s repression of its Muslim Uighur minority. These are the kinds of issues that Saudi Arabia will face as it continues to venture out of its Middle East comfort zone, and it remains to be seen how it will respond to the challenges.