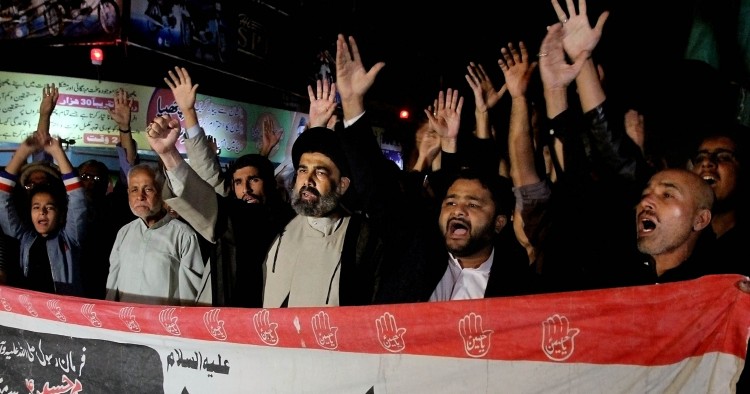 Are religious doctrinal differences primarily responsible for stoking intercommunal fear and hatred? What roles have state, sub-state and transnational actors played in fomenting sectarian discord? And what could be done to avert sectarian violence, to foster tolerance and peaceful coexistence? The essays in this series tackle these and other questions pertaining to sectarianism in the MENA and Asia. Read more ...

On April 25, 2017, a deadly attack carried out by a pro-Islamic State (IS) terrorist group Jamaat-ul-Ahrar (JuA) targeting the Shia Muslims in Pakistan’s Kurram tribal region killed 14 people.[1] JuA, which splintered from the Pakistani Taliban in 2014, espouses a virulent anti-Shia ideology that considers them deviants from mainstream Islam. In the last two years, JuA has worked in tandem with the IS to target Shiites across Pakistan.

The emergence of IS in Pakistan’s complex militant landscape and IS-linked attacks in league with anti-Shia militant factions, such as JuA, Jundullah and Lashkar-e-Jhangvi al-Alami (LeJ-A), are ominous developments, especially insofar as Sunni-Shia sectarian relations are concerned. At the heart of these worrisome developments is the intractable Syrian conflict. As such, the April 25 incident cannot be divorced from the December 2015 attack by LeJ-A in Parachinar, a “warning” to local Shiites to stop aiding “the crimes against Syrian Muslims by Iran and Bashar al Assad.”[2]

The Saudi-Iran rivalry, which has sectarian undertones and is partly responsible for the continuing Syrian civil war, does not bode well for Pakistan’s sectarian fault lines. Pakistan finds itself between its oil-rich ally, Saudi Arabia, and its neighbor, Iran. Pakistan's predicament has become even more complicated in light of the recent Trump-led Arab Islamic American Summit.

The Syrian Civil War, particularly the attack on the shrine of Zaynab in Damascus in 2013,[3] evoked a profound sense of Shia consciousness among an overzealous segment of Pakistan's Shia community. Syria is home to a number of holy sites endeared by Shiites, including the shrine of Zaynab, the granddaughter of Prophet Muhammad. This, among other factors, makes Syria an important country for Shia Islam; and an attack on Syria is considered a direct threat to the Shia sect itself.

As such, over a thousand Shiites from Pakistan, principally from the Shia Turi tribe of Kurram tribal region and the ethnic Hazaras from Quetta, have travelled to Syria to join the Iranian-backed Shia militia, Liwa Zaynabiyoun (Followers of Zaynab Brigade).[4] Though the Zaynabiyoun fighters are chiefly tasked with the responsibility of protecting the shrine of Zaynab, they also fight on behalf of the Assad regime against the Sunni militants.[5]

The involvement of the Turis and Hazara Shia volunteers in the Zaynabiyoun is significant. The two communities have borne the brunt of anti-Shia militancy in Pakistan, compelling them to live in ghettoised settlements and dwellings. This discrimination and ostracism has created a salient Shia identity, leading to their marginalization and the sharpening of their sectarian markers. This, in turn, has resulted in the politicization and militarization of Shia identity to defend their group’s interests. Iran, being the champion, benefactor and protector of Shia Islam in the world, has also expressed empathy for, and at times has extended support to the two groups.[6] Given their alienation at home, some Turis and Hazaras associate with the larger Shia community, epitomized by an artificial identity construct of Iran-led ‘Shiastan.’

Likewise, the Sunni extremists and Islamist groups in Pakistan identify themselves with Saudi Arabia, underscoring the polarization of Muslims in the country. This puts Pakistan in a Catch-22 situation whereby any appeasement or closeness towards Saudi Arabia or Iran exacerbates the sectarian fault lines within its borders.

Pakistan, the second largest Muslim country in the world, has a predominantly Sunni population. It is also home to the second largest Shia population in the world. This puts Pakistan in a unique dilemma; that is, caught in a Saudi-Iran sectarian tug of war. The salient Sunni and Shia identity in Pakistan created during the 1980s to 1990s, as a result of the state’s exclusionary policies of Sunni-centric Islamization, violence against Shias by Sunni sectarian militants, and state patronage given to such outfits and Iranian Revolution, are sensitive to geopolitics in the Middle East and Pakistan’s policy towards Saudi Arabia and Iran. Pakistan and Saudi Arabia have traditionally maintained strong ties based on reciprocity, whereby the Saudis’ oil and their deep pockets have helped Pakistan in times of need, while Pakistan has provided its military capabilities to help the custodians of the two Holy Mosques achieve their military objectives.

Much to the surprise of the Saudis and their underlings in Pakistan, this changed when the incumbent Pakistan government chose to remain on the sidelines instead of joining the Saudi-led coalition against Yemen in 2015 — a decision that infuriated the Saudis and their Arab allies.[7] The Pakistani army was overstretched at the time, and thus not prepared to commit itself in another long war. However, there are signs that Pakistan might join the fight in Yemen after all, since the Saudis have nominated Pakistan’s ex-army chief Raheel Shareef to head the 41-nation Islamic military alliance ‘against terrorism.’[8] However, the exclusion of Iran and other Shia majority Muslim states from the said alliance gives it an unmistakable Sunni character, and lends itself to being construed as an effort by the Sunni states to gang up against Shia Iran and its allies in the Middle East.

Raheel’s appointment was supported by the Sunni and Islamist groups in Pakistan, while Shia groups, particularly Majlis Wahdat-e-Muslimeen (MWM), opposed it. MWM has called the alliance a sectarian entity.[9] Raheel’s attempt to allay Shia concerns by setting conditions on his appointment, which included making Iran a member state in the alliance, have failed. The Deputy Crowned Prince of Saudi Arabia Mohammed bin Salman, Raheel’s new de facto boss, has been more hawkish in his tone towards Iran than before. He has ruled out any chance of peace with Iran and has hinted at war, asserting that the struggle between the two countries will take place “inside Iran, not in Saudi Arabia.”[10]

Conversely, Iran is Pakistan’s neighbor. Though the two countries have a complicated history of bilateral relations, it is important for Pakistan not to antagonize Iran, especially when, as over the past year, ties with Afghanistan and India have deteriorated. Already, the Iran threatened “hot pursuit” against anti-Iran Sunni militant group Jaish al-Adl inside Pakistan’s south-western Balochistan province, alleging their responsibility for attacks on Iranian border security guards.[11] Additionally, the Iranian connection with Shia groups and entities, which are becoming mobilized because of the Syrian war, will only worsen sectarian tensions.[12]

U.S. President Donald Trump’s May 20-21 trip to Saudi Arabia is likely to further fuel Sunni-Shia tensions in the region,[13] and in Pakistan in particular. Not only did Trump commit to a $110 billion arms deal with Saudi Arabia but he vilified Iran by calling it a nation that “fuelled the fires of sectarian conflict and terror.”[14] Trump’s visit is important because it demonstrates that the U.S. has effectively chosen a side in this rivalry for regional supremacy. But the byproduct is dangerous. By appealing to the Sunni states, Trump has implicitly dismissed Shia Islam and added more fuel to sectarian violence. Additionally, Trump’s speech and his ‘sword dance’ with King Salman of Saudi Arabia has put the Kingdom on the offensive. Under pressure, it is possible that Iran may retaliate by harming Saudi interests in the region through sectarian violence. The Saudis, undeniably, would do the same. Either way, this does not bode well for Pakistan, which has been serving as an arena of Saudi-Iran rivalry since the 1980s.

Pakistan’s sectarian cauldron is once again boiling. The geopolitics of the Middle East is sharpening the sectarian identities and ideologies of the particular groups of Sunnis and Shias in Pakistan. This does not bode well for Pakistan. The ostensible alliance between the takfiri IS and the anti-Shia Deobandis not only demonstrates a confluence of interests between the two ideologically distinct entities, but also the Salafization of Deobandi groups. As such, attacks on Barelvis by IS and its allies, such as the attack on the shrine of Shah Noorani in Balochistan in November 2016[15] and Lal Shahbaz Qalandar in Sindh in February 2017[16] have also soared. The expansion of sectarian targets to include Barelvis, a trend that has revived in the last year, signify the growing influence of IS and its message of declaring all those who do not subscribe to its message as apostates.

The deadlock in Syria does not help Pakistan either. Nor does the volatile politics between Saudi Arabia and Iran. It is important that Pakistan’s government adopts policies that soften the striking boundary between Sunnis and Shia in Pakistan, while mediating between the two regional powers to de-escalate the precarious situation. Pakistan’s Prime Minister Nawaz Sharif was not given the opportunity to speak at the Arab-Islamic-American Summit. As embarrassing as it was, this provides Pakistan with an opportunity to distance itself from the dangerously anti-Shia coalition and pursue a delicate and a carefully balanced foreign policy towards the Middle East and thus douse the flames of sectarianism.

[13] See, for example Kareem Fahim and Erin Cunningham, “By backing Saudi Arabia’s vision of the Middle East, Trump may be sowing the seeds of conflict,” The Washington Post, May 27, 2017, accessed May 31, 2017, https://www.washingtonpost.com/world/middle_east/by-backing-saudi-arabi….