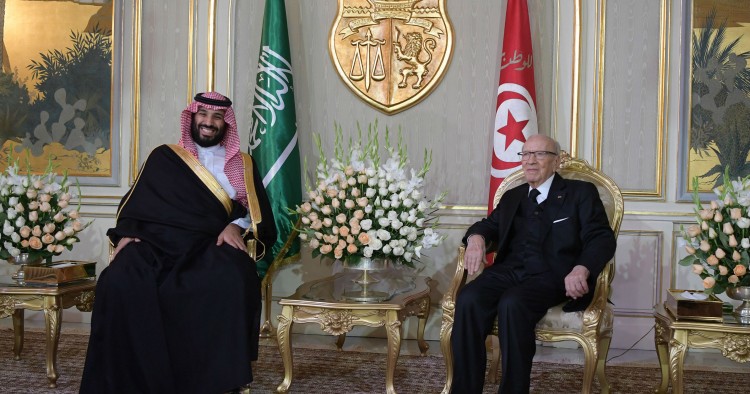 The pledge of fiscal support to Tunisia aligns with the Saudi government’s propensity for leveraging capital injections and fiscal aid packages to shore up strategic alliances with Middle Eastern and North African countries. Yet unlike Bahrain, Jordan, and Egypt––recent recipients of Saudi economic largesse––Tunisia remains both geographically and politically distant from the kingdom. Many Tunisians previously criticized Saudi Arabia’s government for permitting the ousted Tunisian dictator, Zine El Abidine Ben Ali, to reside in Riyadh and avoid extradition requests. More recently, protesters chanted, “Tunisia is not for sale,” as their country’s political leaders prepared to meet with Mohammed bin Salman in late November 2018.

Political tensions aside, it is difficult to ignore the economic clout that Saudi Arabia would contribute to a strengthened partnership with Tunisia. The sheer scale of Saudi Arabia’s economy, which reached a GDP of $684 billion in 2017, dwarfs that of Tunisia, which registered approximately $40 billion in the same year. Relatively small capital expenditures and loans from Saudi Arabia can therefore have a major impact on Tunisia’s economy. For example, Saudi Arabia’s recent $10 billion fiscal aid package to Bahrain amounted to one-quarter of Tunisia’s annual GDP and nearly 70 percent of the state budget for 2018.

Short-term fiscal support may pave the way for increased investment and trade flows between the two countries. Deadly terrorist attacks on the Bardo National Museum and the Sousse Beach Resort in 2015 dampened investor confidence in Tunisia. A government plagued by crises has further eroded trust in Tunisian institutions. Between 2015 and 2017, foreign direct investment inflows decreased from over $1 billion to $880 million. There is hope that investors from the Gulf can help to reverse this trend: Tunisian policymakers launched a digital platform to strengthen linkages with investors and tourists from the Gulf in May 2018.

Tunisia’s agriculture sector presents a likely investment opportunity for Saudi capital. Saudi Arabia imports nearly 70 percent of its food requirements, and the country’s investment strategy in Africa focuses upon efforts to maintain food security. Conversely, the agriculture sector in Tunisia constitutes 12.6 percent of GDP and employs nearly one-quarter of the country’s workforce. Should Tunisia present an attractive proposition for Saudi investments in agricultural activities, it would have wide-ranging implications for improving economic growth and lowering an unemployment rate that has hovered around 15 percent since 2013. The parameters of economic cooperation could then be extended to investments in more complex, service-oriented sectors of the economy.

Tunisia has likewise struggled to reduce its persistent trade deficit, which has pushed foreign currency reserves to record lows. The $3.94 billion held in reserves as of August 2018 only covered 70 days of imports, down from 101 days for the same period in 2017. It is unsurprising, then, that one-quarter of the proposed fiscal package will support the development of export-led industries in Tunisia. The initiative is much-needed; Tunisia’s monthly trade deficit exceeded two billion dinars (~$680 million) in September 2018. Over 70 percent of Tunisian exports are destined for the European Union, an unsurprising destination given the strong historical links with and close geographic distance to European countries. Trade linkages between Tunisia and the broader Middle East region remain weak, but Saudi Arabian firms offer an opportunity to diversify export partners.

Other forms of cooperation between Tunisia and Saudi Arabia continue outside of the economic realm. The two countries conducted their first joint military air drills in October 2018. This military collaboration and the warm reception of Mohammed bin Salman by Tunisia’s state leaders, which included awarding the crown prince with an Order of the Republic medal, contrasted with protests emanating from other spheres of Tunisian society. The Tunisian Journalists Syndicate highlighted the fate of Saudi journalist Jamal Khashoggi, while other protesters criticized Saudi Arabia’s role in Yemen and the ongoing humanitarian crisis.

Tunisia’s struggling economy represents a relatively cheap investment for Saudi Arabia, which continues to function as a regional source for fiscal aid and development finance. However, Saudi Arabia confronts similar challenges––albeit of a much larger magnitude––surrounding foreign direct investments and global investor confidence. This may limit the supply of Saudi capital in the future. Tunisian policymakers must decide how they will respond to the recent economic overtures today as well as the extent to which they intertwine the economic fates of the two countries in the coming years.