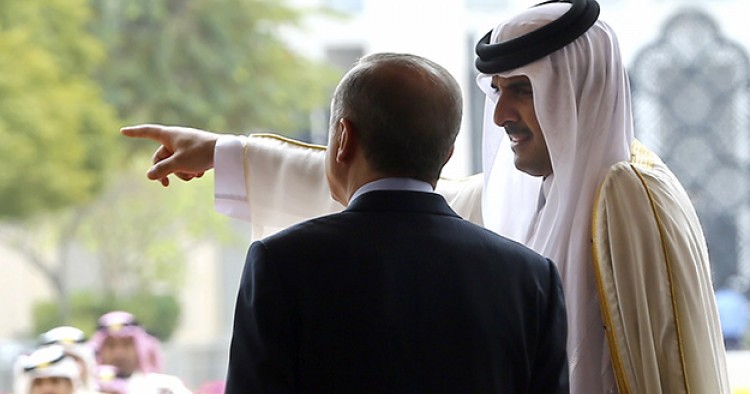 Qatar is Turkey’s closest ally in the Gulf Cooperation Council (G.C.C.) and, since 2011, Ankara has become Doha’s most important regional ally. From Syria to Libya, the Qataris and Turks have worked in tandem to pursue shared interests, chiefly via support for Islamist non-state actors. More than four months into the G.C.C. crisis, Ankara has played a pivotal role in assisting Qatar weather the blockade imposed by a quartet of Arab countries—Bahrain, Egypt, Saudi Arabia, and the United Arab Emirates (U.A.E.). Looking ahead, Turkey’s position in the G.C.C.’s row complicates Ankara’s standing in the Arabian Peninsula and raises important questions about the future of Turkey’s ties with Saudi Arabia.

Turkey’s reaction to the G.C.C. crisis demonstrated that Ankara’s relationship with Doha is about more than shared ideological orientations. Turkey has established itself as a true ally of Qatar, not merely a strategic partner. Turkey did so by deploying its forces to the emirate shortly after the crisis erupted, heightening the costs of any planned military operation against Qatar, and increasing the quantities and speed of food deliveries to thwart a food security crisis in the blockaded country. Such action served to enhance Qatar’s confidence in being able to strongly resist the quartet’s pressure to capitulate.

Turkey continues to play an important role in fostering the growth of Qatar's indigenous industries to make the emirate more economically self-sufficient and less reliant on imports, particularly in the food sector. On October 23, Ankara's ambassador to Doha, Fikret Ozer, announced that as part of "Turkey's contribution to Qatar" his country will help the emirate increase its production of locally-made products through investment and future parternships with Qatari firms.

Beyond military and food security support, Turkey’s leadership has strongly backed Doha diplomatically and morally. Eight days after the quartet cut off diplomatic and economic ties with Qatar, Turkish President Recep Tayyip Erdogan denounced the four Arab states’ blockade as a “death sentence” that was “inhumane and un-Islamic.” Erdogan went further, subtly accusing countries in the G.C.C. of having also played a role in last year’s failed coup plot against Turkey’s civilian government.

In July, the Qatari emir hailed Doha’s alliance with Ankara in an address to his country, expressing the emirate’s “gratitude to Turkey for rapidly implementing our cooperation agreement and meeting our basic needs.” There was much symbolism and solidarity behind Emir Tamim’s September 14 trip to Ankara, which made Turkey the first country that the Qatari leader visited since the crisis began in June.

Despite the Turkish president’s harsh rhetoric against the quartet, he was determined to play a diplomatic hand in an effort to swiftly resolve the row. On July 23, he visited King Salman in Saudi Arabia, which he hailed as “the region’s big and wise country” before departing to the kingdom. Erdogan went to Saudi Arabia, where the local media had lashed out against Turkey for its role in the Qatar crisis since its outbreak, partly for damage control purposes. Having left the kingdom without any success in terms of softening Riyadh’s stance against Qatar, Erdogan’s trip to Saudi Arabia underscored Ankara’s limited capacity to help the opposing sides mediate by virtue of Turkey’s support for Qatar. Ultimately, Ankara has lent its support to the efforts of Kuwait’s emir, who, unlike Erdogan, is seen by the quartet as sufficiently neutral to mediate with the trust of all involved parties.

For years prior to the Qatar crisis, a history of territorial disputes, border clashes, and alleged coup plots left Doha with the perception that Saudi Arabia was a threat to Qatar’s sovereignty. The G.C.C. spat of 2014 prompted Qatar to further diversify its security alliances to counterbalance pressures that Riyadh could impose on Doha to bring the emirate closer into Saudi Arabia’s orbit of influence. Qatar turned to Turkey, with both countries agreeing to establish a joint military base in the emirate. On November 5, Turkey opened a helicopter flight simulation training center in Qatar, strengthening bilateral defense cooperation. Yet Turkey’s military presence in Qatar added more strain to Ankara’s relationships with Cairo and Abu Dhabi as the two have had a negative outlook toward Turkey’s foreign policy and its burgeoning alliance with Qatar, which they continually accused of sponsoring terrorism across the Arab world.

The month before the Gulf’s ongoing diplomatic row broke out, the U.A.E.’s ambassador to Washington stated that most U.S. citizens lack an understanding of how Turkey has recently changed in addition to "the long-term threat it poses to most of us." Unquestionably, the call to close the joint Qatari-Turkish military base in the emirate as one of the 13 demands by the quartet shows a clear skepticism among the four Arab countries of a Turkish military presence in the Gulf.

Bahrain’s foreign minister, only two weeks after announcing that Turkey’s military presence in the emirate was unrelated to the Qatar crisis, reversed his stance. In a reference to Ankara’s deployment of Turkish troops to Doha, Sheikh Khalid bin Ahmed al-Khalifa warned that the “deployment of foreign troops with their armored vehicles is a military escalation for which Qatar will bear the consequences.”

Why would Riyadh feel threatened by a Turkish military presence in Qatar? After all, in December 2015, Saudi Arabia’s then-Crown Prince Mohammed bin Salman unveiled the Islamic Military Alliance to Fight Terrorism, of which Turkey was one of the founding 34 members. Riyadh, Doha, and Ankara also coordinated on efforts to topple Bashar al-Assad’s regime. Yet the cause of regime change in Damascus is not uniting Riyadh, Ankara, and Doha as it once did. Saudi Arabia is increasingly bogged down in Yemen, which has distracted the kingdom from the Levant; Turkey has unofficially abandoned support for regime change in Damascus; and Qatar has come under significant pressure from Russia and Iran—two countries which Doha has had to turn to for assistance since June 5—to tone down its support for Syrian rebels.

Ankara’s position on the Qatar crisis has certainly irked Riyadh. Nonetheless, the Saudi leadership has been careful to protect Riyadh’s relationship with Turkey from the G.C.C.’s row. The fact that neither Saudi Arabia, Bahrain, nor the U.A.E. have taken any economic action against Turkey as punishment for Ankara’s pro-Qatar position suggests they are keen to avoid letting the Qatar crisis cost them their relations with Turkey.

The quartet’s refusal to embrace Egyptian President Abdel Fatah el-Sisi’s call for extending the blockade to Turkey, coupled with the omission of Turkey’s military presence in Qatar in the reduced list of demands (from 13 to six), further highlighted Riyadh’s interest in not burning any bridges with Ankara. As underscored by the Saudi ambassador to Turkey’s speech in the Turkish capital last month, in which he stressed that “there has always been close dialogue between Turkey and Saudi Arabia,” Ankara and Riyadh appear determined to maintain bilateral relations despite opposing positions vis-à-vis Doha. The Turkish leadership defended Saudi Arabia following the wave of detentions on November 4 as an internal matter, and quickly condemned the Yemeni Houthi rebels' firing of a ballistic missile at Riyadh the same day, further illustrating Ankara's determination to avoid further friction in Turkish-Saudi relations.

Although officials in Ankara and Riyadh have, thus far, proven capable of compartmentalizing various issues in Turkish-Saudi relations, what remains to be seen is how a potential escalation of the G.C.C. crisis would impact Turkey’s relationship with Riyadh. It is unclear what role Turkey’s military would play in the event that the quartet orchestrates a coup in Doha, or takes any military action against Qatar. Under such circumstances, Turkey would likely be forced to choose between an alliance with Doha and an important relationship with Saudi Arabia—a choice it would prefer not to make.