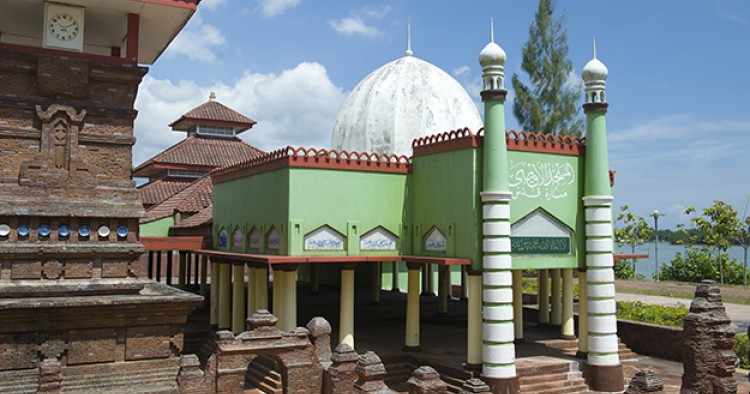 Are religious doctrinal differences primarily responsible for stoking intercommunal fear and hatred? What roles have state, sub-state and transnational actors played in fomenting sectarian discord? And what could to foster tolerance and peaceful coexistence? The essays in this series tackle these and other salient questions pertaining to sectarianism in the MENA and Asia Pacific regions. Read more ...

Phelim Kine, deputy director of the Asia division at Human Rights Watch, offered a damning portrait of the world’s largest Muslim country when he wrote in a 2013 Huffington Post article that “across Indonesia, religious minorities, including several Protestant groups, Shia, and the Ahmadiyah, who consider themselves Muslims but are considered blasphemers by some other Muslims, are targets of harassment, intimidation, threats and, increasingly, acts of mob violence.”[1]

No doubt, as others have reported, religiously-inspired anti-pluralist actions, vigilante attacks, Islamist extremism, and terrorism—as  well as a spectrum of ethnically, regionally, and religiously-based civilian groupings and paramilitary bands—have figured in Indonesian politics since the downfall of Suharto’s New Order dictatorial regime in 1998.[2] However, not all areas of the country have experienced sectarian violence. Not all Indonesian Muslims are fanatics or zealots, nor are Muslim radicals the only agents of conflict. On the contrary, there are many instructive and inspiring examples across contemporary Indonesia of local leaders and communities that have produced and sustained religious harmony.

The province of Central Java challenges the “conventional wisdom” that contemporary Indonesia is seething with religious intolerance and Islamist radicalism.[3] Examples of peaceful civil coexistence, religious harmony, and grassroots peacebuilding abound, and local actors have been able to manage their differences in fruitful ways.

In the regency of Wonosobo, for instance, Shi‘a, Ahmadis, and followers of a Javanese form of “local Islam” called Islam Aboge,[4] have for years lived peacefully beside mainstream majority Muslims, as well as adherents of Christianity, Buddhism, Hinduism, and local beliefs. Located in the famous Dieng Plateau in the southern highlands of Central Java, Wonosobo, with 771,000 inhabitants, is home to the Nahdliyin, followers of Indonesia’s largest Islamic organization, Nahdlatul Ulama (NU). Whereas in some regions, Muslim hard-liners have been involved in harsh attacks against Ahmadis and Shi‘a, who they deemed blasphemers of Islamic teachings and the Prophet’s companions, Wonosobo’s Nahdliyin and Muslim villagers have a long-established friendship with the followers of Shi‘ism, Ahmadiyah, and Islam Aboge. These groups customarily engaged in various joint programs and mundane activities—both secular and religious—such as kerja bakti (community service), kenduri (ritual feasts), and tahlilan (communal prayers and ceremonies to venerate the deceased).

Ahmadiyah has existed in Wonosobo since 1924, when the preacher Sabitun introduced it to the region. At present, Wonosobo is home to some 6,000 Ahmadis, 250 Shi‘a, and roughly 200 Islam Aboge followers. This great achievement of peaceful interreligious coexistence cannot be divorced from the marvelous work of the Wonosobo regent Abdul Kholiq Arif, who is also a local leader of NU. Regent Arif often states that religious minorities are also Indonesian citizens whose political, cultural, economic, and religious rights need to be protected.

To safeguard interreligious relations, uphold interfaith peace, and build trust among religions, Arif has involved all of the region’s religious elements, including Christians, Hindus, Buddhists, Taoists, Confucians, Sunnis, Shi‘a, and Ahmadis, in the local government-sponsored Forum Komunikasi Umat Beragama (Forum for Communication for Religious Adherents). This forum serves as an avenue for engaging in what Leonard Swidler has described as a “deep dialogue” among religions. Moreover, Arif has proposed a regional law for regulating interreligious relationships aimed at protecting religious minorities’ rights. It is notable that Arif is concerned with protecting the rights not just of religious minorities, but also those of political minorities (such as ex-members of the Indonesian Communist Party or victims of the 1965-66 national tragedy), and of gender minorities (such as gays, lesbians, bisexuals, and transgenders). To balance his “civilized, liberal governmental programs,” Arif has involved—and engaged with—state and non-state actors, including the military, police, village leaders, adat chiefs, and street hoodlums, in order to nurture a sense of belonging that ultimately contributes to peace and security in the area. Religious leaders from Ahmadiyah, Shi‘ism, Islam Aboge, and non-Islamic religions also recognize his role in creating and sustaining the peace and religious tolerance in Wonosobo.[5]

The region of Jepara on the northern coast of Central Java is another example of how local religious communities have been able to handle their discrepancies in ways that foster civil cooperation. Whereas in some areas of the country—such as Sampang, Bogor, and Lombok—Shi‘a have been the targets of violence and hostilities by Sunnis, in Jepara the two religious groups have long maintained good relations. Conversions from Sunni to Shi‘i, as well as the reverse, do not arouse sectarian rage in the region. As elsewhere in Indonesia, Sunni Muslims, most of them members of NU, have been the dominant group in Jepara. Although only a few hundred Shi‘a live in this region, they feel safe to practice their beliefs and traditions. In fact, they have built a Java-style Islamic seminary, Pesantren Darut Taqrib, in the village of Banjaran. The leader of this pesantren, Miqdad Turkan, said, “We have a good friendship between Sunni and Shi‘a followers. We respect each other regardless of our beliefs. We also frequently arrange social activities such as blood drives and helping disaster victims.”[6] Sunni and Shi‘i leaders in the region such as Achmad Zaelani and Abdul Qadir Bafaqih attest that people in Jepara have understood plurality not only as a unique feature of this area, but also as a rahmah, or a blessing from God, that everyone needs to esteem and safeguard.

Christian-Muslim harmony also prevails in Jepara. The narratives of Christian-Muslim peace and tolerance can be found, for instance, in the districts of Pekoso and Tempur, where Christians and Muslims have worked together not only in mundane activities but also in religious ones such as celebrations of religious holidays like Christmas and Eid al-Fitr. Widely known as a model of religious harmony, these areas are home to Muslims and Christians linked to Gereja Injili Tanah Jawa (GITJ), a Javanese Mennonite Church. Located in the highlands of Muria, the regions became well known because the GITJ church is fittingly located in front of the Asyuhada Mosque. Both church and mosque were built together by Christians and Muslims. During Christmas, Muslims, including village officials and religious figures, attend church, greet their Christian fellows, and help cook for the Christmas celebration. Christians do the same during Eid al-Fitr. Christians freely go to the mosque to attend prayer sessions while Muslims freely attend church services. To avoid time conflicts in religious services and prayer sessions, church and mosque officials always discuss schedules of worship and religious activities.

In addition to visiting and helping each other in everyday life and during the holidays, residents have been able to freely convert without fear―a situation that sharply contrasts with that of West Java. A local village leader said, “Converting to another religion is a common thing at the moment here. Muslims can convert to Christians, Christians can convert to Muslims. No one will attack them. We believe in the principle of ‘be to you your religion and be to me my religion.’” As an outcome of free conversion, some families consist of both Christians and Muslims. The village chief, a Muslim named Sutoyo, said that keeping the peace—which he believes to be a sanctioned mandate from the village’s ancestors—is much more fruitful than engaging in discord and violence.[7]

Similar stories of Christian-Muslim tolerance and cooperation can be found elsewhere across the province of Central Java—in Solo, Boyolali, Kebumen, Purwokerto, Salatiga, Semarang, Kudus, Kendal, Blora, Pati, and Batang—as well as in certain areas of “outer Java,” including in the “conflict zones” of Ambon, Halmahera, and Poso.[8] In Solo, Muslims and Christians, championed by courageous religious leaders such as KH Muhammad Dian Nafi and Rev. Paulus Hartono, have cultivated a solid friendship and collaborated on humanitarian service initiatives, interreligious dialogues, and peacemaking activities. Dian Nafi and Paulus Hartono built the Forum for Peace across Religions and Groups as a cultural medium for interfaith gatherings aimed at transforming destructive conflict into productive peace. Both religious leaders have also worked together for years to promote humanity and harmony with some members of Hizbullah, a Solo-based Islamist paramilitary group not related to Lebanon’s Shi‘i Hezbollah. Previously involved in various sectarian conflicts, many members of this group have now become peace activists and humanitarian workers.[9]

In Semarang, the provincial capital of Central Java, a group of Muslims and non-Muslims (Catholics, Protestants, Buddhists, Hindus, Confucians, and even atheists) led by Tedi Kholiludin, Ronny Chandra Kristanto, and Lukas Awi Tristanto, built a House of Peace (“Pondok Damai”), an informal forum of interfaith gatherings. The group’s main activities include retreats in which participants share stories and discuss issues facing religious/non-religious communities, as well as visits to sacred sites associated with certain religious group.[10] Such activities have built mutual trust and understanding among the groups.

Additionally, members of the Institute for the Study of Social and Religion have long worked across religious divides to provide advocacy for victims of religious violence, protect religious minority rights, and establish religious freedom and peace in the area.[11] Semarang is also a base for an interfaith/ethnic group called Kopi Semawis. Coordinated by Harjanto Halim, a Chinese philanthropist and interfaith activist, the group has played a major role in keeping the region free from radicalism and intolerance.

Indonesia is not immune to ethno-religious tensions, conflicts, and violence, some of which have been triggered by the appearance of transnational Islamist groups and others by the state apparatus and locally-based Muslim and Christian groups.[12] But, as the province of Central Java illustrates, there are also numerous examples of interfaith grassroots peacebuilding―of local social actors working tirelessly and successfully to build trust and cooperation across ethno-religious lines. Nevertheless, grassroots peacemaking alone cannot create a stable, enduring peace. The future of interfaith relations and intergroup peace in this archipelago will certainly depend on serious, positive collaborations between society and state actors. State-society synergy is the key to future strategic peacebuilding.

[2] The Dutch scholar of Indonesian Islam, Martin van Bruinessen, characterizes post-Suharto Indonesia as an era of conservatism and radicalism, typified by the growth of radical Islamic organizations and hard-line Muslims. A number of research/advocacy centers such as the Setara Institute for Peace and Democracy (Jakarta) and the Institute for the Study of Social and Religion (Semarang) have well-documented cases of religious intolerance and religious freedom violations in contemporary Indonesia. See Martin van Bruinessen, ed., Contemporary Developments in Indonesian Islam: Explaining the “Conservative Turn” (Singapore: Institute for Southeast Asian Studies, 2013). The reports of the two institutes on issues around anti-pluralist acts and religious intolerance can be seen at http://www.setara-institute.org and http://elsaonline.com.

[3] The contributions of “grassroots peacemakers” in keeping the peace in their areas can be seen at http://edsus.tempo.co/Perekat-republik.

[4] Aboge is an acronym for “Alif Rebo Wage,” a Javanese form of local Islam (sometimes called “Kejawen”), which is mostly organized under the organization Paguyuban Tunggul Sabdo Jati.

[5] See the role of Regent Arif in maintaining the peace in his territory at http://edsus.tempo.co/Perekat-republik. Regent Arif is an example of a “civil state,” namely a political ruler who has done an effective job governing society by establishing democratic rules and conducting tolerant, pluralist acts.

[7] See how Jepara’s Muslims and Christians overcome their tensions and disagreements in order to maintain peace and harmony in Camelia Pasandaran, “Central Java Village Shows that Unity in Diversity is Possible,” Jakarta Globe, 17 January 2014, http://www.thejakartaglobe.com/news/central-java-village-shows-that-unity-in-diversity-is-possible.