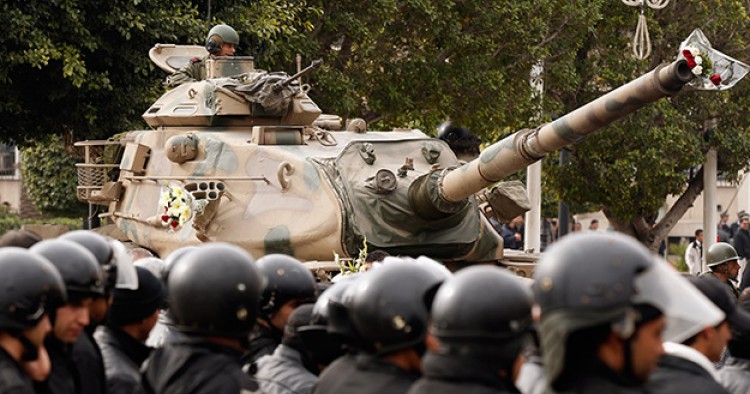 January 27, 2014 will likely be engraved in the collective memory of the Tunisian people as the day they witnessed the adoption of their first post-authoritarian constitution—a charter that will hopefully pave the way for the country’s democratization. This legal framework was ratified by members of the Tunisian National Constituent Assembly (NCA) in a celebratory atmosphere.

This constitutional process would not have come to pass without the institutional legitimacy that emerged in the post-uprising era and the inclusive consensus between Islamists and their detractors, mainly leftist-secularists. But while the NCA members’ efforts in drafting the constitution that took more than two years are laudable, they are not completely successful.

The security sector, which includes the police and intelligence apparatus as well as the military, is the missing link in this fourth draft of the constitution; the document does not provide positive reform of the sector. For more than two decades, many Tunisians experienced political suppression and extensive surveillance, suffered torture, and were forced into exile. Internal security agencies, mainly the so-called “political police” and the state security service, were the regime’s instrument, acting as both the guardians of the public sphere and as invaders of personal lives. It is likely that the NCA members’ security illiteracy prevented them from addressing changes to the sector, which is crucial for a working democracy. Indeed, all Tunisians should be ensured “freedom from fear” in their constitution when it comes to this sector.

Of course, internal security apparatuses and intelligence services never fell under legislative scrutiny, judicial control, or civil society oversight under Ben Ali. Rather, they operated outside of any legal framework and were above the law. For instance, under the ousted autocrat, accountability and transparency were never demanded of the police. Today, security in Tunisia is still characterized by dominant state-centric hard security. Since the country’s independence, the security sector has continued to be a driver of lawlessness, opacity, corruption, and threat to Tunisian citizens.  International and Tunisian human rights organizations have recorded serious abuses perpetrated by internal security forces in the post-authoritarian era, including the excessive use of tear gas and bird shot to disperse crowds, extrajudicial detention, and even torture, which is prohibited by law but remains a common practice in police stations.[1]

The new constitution has thus failed to regulate the security sector, in particular to adjust its structure, size, and resources. Security governance should be based on accountability and transparency that ensure the rule of law, civilian control over the military, and effective parliamentary oversight of security and armed forces and intelligence agencies. The monitoring of security and defense procurement to prevent corruption is also necessary.[2]

The lack of expertise among civilian authorities vis-à-vis the security sector is what hampered the sector’s constitutional reform. Over the two years of debate, the authorities showed little ability to draft security legislation, conduct effective oversight of security operations, or cultivate confidence between Tunisians and their security forces. They also failed to investigate complaints of human rights abuses or perform audits on security spending. Essentially, the security arrangement under Ben Ali, in which the security sector was the domain of the executive power, is still in place in the post-authoritarian era.

Furthermore, the outgoing Ennahda-led government was cautious about initiating security reform. The Islamist government was likely deterred by the complexity of the reforms needed and the difficulty of overcoming the heavy legacies of the authoritarian regime. The continued instability plaguing the country and the resultant need for an operational security apparatus was another element that likely prevented the previous government from introducing reform. Some civil society actors argue, however, that Ennahda avoided implementing serious reform as it was seeking to rehabilitate Ben Ali’s repressive security apparatus for its own use.[3]

The vagueness of Tunisia’s system of government—neither presidential nor semi-presidential nor parliamentary, but mixed—is another factor that hindered security reform. Such ambiguity is reflected in how the tasks performed by the president and the prime minister are delineated in the constitution. For example, article 77 states that the president is responsible for setting general policies in the realms of defense and foreign and national security, but only after consulting with the prime minister, whereas article 89 grants the prime minister the right to select the ministers of foreign affairs and defense—but only after consulting with the president.[4] This overlap of constitutional powers between the two heads of the executive body could negatively impact the chain of command during wartime or when the country is facing threats that could disrupt its stability. However, this issue can be overcome if legislative mechanisms to control security and the armed forces are developed that explicitly elucidate the relationship between the heads of state, the government, the parliament, and the various security forces in terms of the distribution of powers.

Another troubling issue is that the constitution gives the executive undisputed authority in hiring senior military officials. According to article 78, the president has the right to “appoint and dismiss holders of senior military and diplomatic positions that are related to national security, after consulting with the prime minister.” As such, the president is not required to submit these nominations for approval by the legislative power. This unilateral appointment of senior security staff by the executive could endanger a nascent democracy, as these appointments could immunize senior security officers from being accountable to the legislative body and could politicize their mission.

The new constitution also fosters problems between the civilian government and the armed forces, which could result in a disenchanted military unable or unwilling to fight terrorism. The NCA, for example, missed the opportunity to give members of the military their full rights. As in the previous constitution, the document requires that the military “remain entirely impartial” in performing its duties, which in part means that its members cannot vote. Further, most policy makers are disinclined to spearhead any major reorganization of the military that could provide it with better decision making and operational capabilities. Haunted by the unlikely occurrence of the Egyptian scenario, that is, an ouster conducted by the military, in Tunisia, Interim President Moncef Marzouki and his civilian advisors are seemingly opposed to the institutionalization of a joint chief of staff. Rather, this position is seen more as a threat than one that is key to coordinating and providing guidance to the varied components of the armed forces so that they may accomplish their military missions and meet the security challenges facing the country.[5]

Tunisian lawmakers have a long way to go to fix this malaise in civil-military relations. As a Tunisian senior army officer recently said, “Fighting terrorism in today’s Tunisia requires not only a genuine political will seeking to professionalize the army and provide it with the adequate means to deal effectively with emergent threats, but also involves bringing civilians within the government closer to understanding the activities related to defense and national security. This mutual understanding is the only way to generate respect and trust.”[6]

It should be noted that the role assigned to the army in fighting domestic terrorism in tandem with the internal security forces must be legally framed in order to prevent human rights abuses and ensure accountability. This framework will bring greater clarity about the responsibility and missions of these two organizations in terms of counterterrorism and counterinsurgency. Counterterrorism measures often blur the lines between security needs and civil and political rights, and can thus undermine lawful and legitimate democratic demands.

Tunisian legislators need to demonstrate a strong sense of flexibility and creativity either by amending the constitution or drafting comprehensive laws with constitutional clout that put the security sector under democratic control. Reforming security institutions cannot be accomplished without constitutionalizing effective security governance that addresses the challenges inherited from the fallen system, which shored up an authoritarian regime.

[4] In addition, in accordance with Article 91, the prime minister “sets the State’s general policy, with considerations to the provisions of Article 77, and shall ensure its execution.”

[5] In fact, the Tunisian army is the only force in North Africa operating without a joint chief of staff.