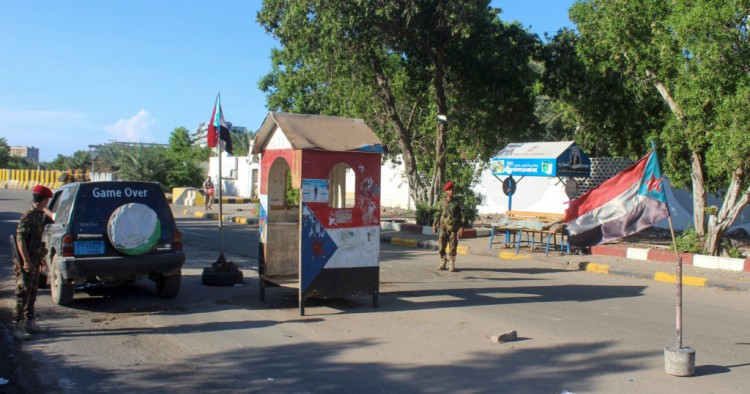 A few hours before Ramadan’s pre-fasting suhoor meal on April 25, the Southern Transitional Council (STC), a UAE-sponsored regional secessionist movement, abruptly announced self-administration in Yemen’s South and a state of emergency. Legally, Article 121 of the Yemeni constitution limits the right to declare a state of emergency to the president, meaning the announcement was unlawful. It also marks a continuation of the group’s August 2019 armed rebellion, goes against the November 2019 Riyadh Agreement between the STC and the Saudi-backed government of President Abed Rabbo Mansour Hadi, and risks a further escalation of conflict in the country.

The statement’s sixth and seventh provisions urged southern governors to cooperate and the Saudi-led coalition to support this “important” step. However, local, regional, and international actors expressed clear disapproval. Internally, the governors of five key provinces representing much of the South’s territory and resources — Hadramawt, Shabwa, al-Mahra, Socotra, and Abyan — rejected the declaration, refuting yet again the idea that the STC is the representative of southern grievances, as it regularly claims. The absence of public rallies in support of the STC’s declaration in these governorates, except for an armed attempt to destabilize the island of Socotra (some 950 km away from Aden) that Saudi Arabia tried to contain, appears to back up the governors’ stance for now. Regionally, the Saudi-led coalition and the Gulf Cooperation Council (GCC) reiterated their support for the Yemeni government, advocating the immediate implementation of the Riyadh Agreement and demanding that the STC retract its announcement. Internationally, the UN special envoy for Yemen, Martin Griffiths, described the STC’s move as “disappointing” in light of the effects of recent flooding in Aden and the risk of the spread of COVID-19. Additionally, the EU, Turkey, Egypt, and three UN Security Council (UNSC) permanent members — the U.S., the UK, and (implicitly) China — warned that the announcement could further destabilize an already volatile Yemen and called for the urgent implementation of the Riyadh deal. The widespread and vociferous objections to the STC’s announcement demonstrate how little external support the group enjoys, as well as the relative lack of political maturity in its decision-making.

The STC faces rising internal pressure for preventing the government from delivering services while itself failing to fill the gap. The announcement may thus have been designed to create a distraction, in the hope of defusing public anger and diverting attention elsewhere. Summer Nasser, a country analyst, suggested that the STC “resorted to these kind of statements” to “temporarily mollify local pressure,” adding that this has been “a reoccurring pattern since last year.” The recent flooding in Aden, which destroyed dozens of houses and affected thousands of people, amplified local frustration over the government and the STC’s failure to deliver public services and, by extension, their crisis management response. The UN Office for the Coordination of Humanitarian Affairs estimated that the floods affected more than 100,000 people, mostly in the governorates of Lahj, Aden, Sana’a, Abyan, and Marib.

Two days before its declaration of self-rule, the STC blocked the government’s return from Riyadh to address the natural disaster, and described the action as a public “escalation” to protect “national achievements.” This came after the STC’s deputy chief, Sheikh Hani bin Braik, pre-emptively blamed the government for failing to address the flooding and trying to foist “responsibility for rescuing Aden on the STC.” Undermining state institutions while calling on the government to deliver services and pay salaries is both problematic and ironic. The UAE-backed Security Belt Forces have forcibly assumed control of security in Aden since at least January 2018, and alongside other STC-aligned forces kicked the government out of the interim capital in August 2019, meaning they cannot evade responsibility for what happens there now. Nevertheless, the current government is weak, technically absent, and many cabinet ministers are incompetent, with some of them holding public office for the first time in their career at a time when deteriorating conditions and a multiplicity of crises require real expertise.

Against this backdrop, it is not surprising that hundreds of protesters took to the streets of Aden, chanting “No STC, no legitimacy, our revolution is popular” on April 24. Residents expressed their profound frustration toward the legitimate government, as well as the STC’s role in undermining it, over its failure to deal with the flooding and inability to provide water and power as the province braces for a hot summer. Local communities urgently need basic services, not more instability, and there is a dire need to have a functioning government in Aden.

Amid the unprecedented distraction of the global COVID-19 pandemic, Saudi Arabia’s focus on its cease-fire and backchannel talks with the Houthis, and mounting Houthi military pressure on Marib, the STC may have presumed that its announcement would go uncontested. The council’s leaders — who are now in Abu Dhabi after Riyadh blocked their reentry to Aden from Amman on March 11 — expected outside developments would compel Saudi Arabia and the international community to turn a blind eye to, if not endorse, their announcement.

Unsatisfied with its geographical limitation to Aden and parts of Dale and Lahj, the STC wants to expand its control of Abyan and Shabwa toward the eastern governorates and to become a dominant de facto actor, similarly to the Houthis in the North. Its announcement called for the establishment of shadow self-administration committees to monitor state institutions, a step that replicates the Houthi revolutionary committees after the takeover of Sana’a. In the same vein, the STC also called on its legal, military, security, and economic committees to “direct” public institutions in a bid to eliminate the government presence.

The response of local authorities in five of the eight governorates in the South and current public concerns in several provinces show that the STC has been exploiting legitimate southern grievances and local frustrations to achieve political gains at a time when the region is facing natural disasters and a looming public health crisis. On April 28, widely circulating news indicated that people with coronavirus symptoms had died in Aden that were not designated as infected. A day later the Supreme National Emergency Committee for COVID-19 acknowledged there were five cases in the city, and the pandemic could spread rapidly given the limited health infrastructure, among other issues.

By declaring self-rule the STC also sought to advance its efforts to be part of comprehensive peace talks as an independent actor and recalibrate its strained ties with Saudi Arabia. Yet the Riyadh Agreement already grants the STC and other southern entities representation in the government, and by extension, involvement in peace talks through its implementation. The kingdom has recently invested in building up counter-balancing forces, such as those of al-Subiha tribe, and the coalition suspended the salaries of STC-aligned forces, according to the announcement, most likely due to its inflexibility in implementing the agreement and outside loyalties.

However, while talks with the Houthis have been problematic largely due to their prioritization of political over security and military measures, the STC has also been pressing the government to make further concessions, as its April 23 statement demonstrates. It says that there is “a dire need to implement the political component of the deal” and accuses the government of obstructing efforts to that end. A day before the STC’s declaration, local media reported a Saudi-facilitated informal deal had been struck on military and security arrangements between the STC and the government at the coalition’s headquarters in al-Buraiqa, Aden, but the STC still went ahead with its announcement anyway. Enduring mistrust between the government and the STC, coupled with the gains the latter thinks it can achieve under the current conditions, suggest that the Riyadh Agreement, despite persistent hurdles, remains a better way forward than renewed armed clashes.

There are five primary local, regional, and international implications. First, the self-administration declaration has doubtless complicated conflict dynamics and resolution efforts more broadly. It has further deepened the state of instability as COVID-19 spreads across the country, as the STC’s attempt to take over Socotra has made clear. Second, the establishment of shadow committees erodes the authority of the legitimate government on the ground, reduces its already limited sources of revenue, weakens its ability to deliver services and pay salaries, and runs the risk of getting the public accustomed to the full absence of state institutions. The STC’s recent collection of local customs revenue worth over $1 million from free zone customs in Aden on May 5 is an alarming step, one that parallels Houthi control over revenues in the territories it controls, and indicates the financial challenges ahead for the Hadi government, if left unchecked. Therefore, Saudi Arabia now faces a huge responsibility and challenge in ensuring the implementation of the Riyadh Agreement, and will require credible international pressure to help make it happen.

Third, the self-administration announcement will, contrary to what the STC would have hoped, likely increase international support for the territorial integrity and unity of Yemen in the short to medium term. Widespread regional and international opposition to the STC’s move, which is seen as potentially further exacerbating the conflict, is indicative of the lack of international support for secession at this stage. In a statement on April 29, the UNSC renewed its “strong commitment to Yemen’s unity” and its efforts to stabilize the country.

Fourth, the STC is unlikely to be viewed as the sole representative of the southern cause at the international level, although perhaps as the most powerful one, unless major southern and eastern entities endorse it. The international community now better understands that the STC is one of many actors in the region, rather than the only one, especially given that many southern entities did not rally behind its announcement. The UN secretary-general’s spokesperson, Stephane Dujarric, has reiterated the importance of including “southern groups” in addressing “the legitimate concerns of all Yemenis.” This means that the UN must ensure the inclusion of peaceful southern actors in the peace process to underscore that violence does not marginalize peaceful movements and is not the only way to express grievances and get a seat at the table.

Finally, Riyadh will likely attempt to further curtail the STC’s power in the short term, albeit cautiously, so as to avoid confrontation, while also slowly balancing against its regional sponsor, the UAE, to increase its influence in the South. The coming months should offer some signs as to whether this will be feasible, but the best way forward remains clear: supporting legitimate institutions.

As the STC has not yet retracted its announcement, the least costly way to avert further escalation is to implement the security, military, and political provisions of the Riyadh Agreement, which is currently on the brink of failure. To do that, the UNSC’s permanent members, the GCC, the EU, and the UN must put their weight behind the deal’s sponsor to ensure the presence of a functioning government in Aden that can limit the spread of COVID-19, address the recent flooding, deliver services, and restore the normalcy of everyday life. These issues should be the core of the Yemeni government’s internal legitimacy, with or without the Riyadh Agreement.