“Self-rule” in Aden and the implications for Russia 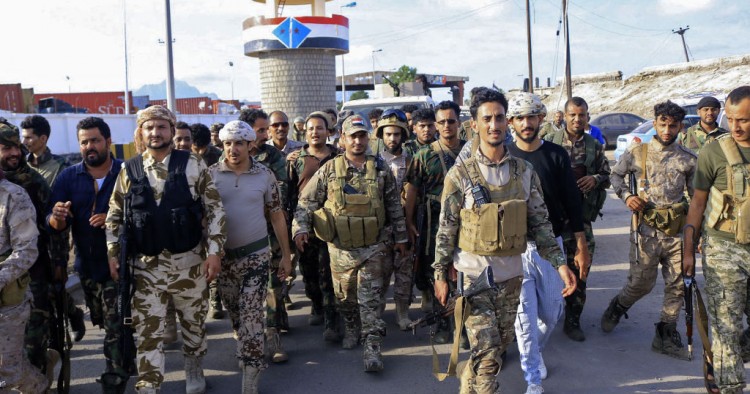 Since Russia’s military intervention in Syria intensified in September 2015, many analysts have been busy trying to assess and understand Moscow’s role in the Middle East and North Africa (MENA). When discussing Russia’s regional foreign policy, the following three points are key. First, Russia is generally cautious and pragmatic when it comes to navigating complicated dynamics in conflict-torn Arab countries, where alliances are often fluid and shadowy. Second, Moscow has proven capable of skillfully maximizing its gains in one part of the MENA region without losing its credibility in another. Third, the United Arab Emirates (UAE) has become an important player in Russia’s “return” to the Arab world roughly 30 years after the Soviet Union’s implosion.

Russia’s position as a “key if quiet player” in southern Yemen underscores these three points. In contrast to Syria, where Moscow has firmly supported the government against rebels seeking to topple it, Russia’s approach to Yemen has been based on strategic neutrality. The goal has been to position Moscow as a greater stakeholder in mediation between the various Yemeni parties and outside players.

Moscow has engaged the Southern Transitional Council (STC), the UN-recognized Yemeni government led by President Abed Rabbo Mansour Hadi, the Houthi rebels, as well as the three main regional powers intervening in Yemen — Saudi Arabia, the UAE, and Iran. It also maintains dialogue with Oman on the Yemen file, which is significant given that the sultanate has been facilitating peace talks since 2015 as a neutral actor in the crisis. In order to maximize its leverage, Russia has been serving as a mediator between various actors involved in the conflict, including the STC and Yemen’s UN-recognized government.

What drives Moscow’s long-term interests in southern Yemen are strategic factors — chiefly Russian access to the Red Sea from the Arabian side and possibly a military base in the region. In a historical context, such interests are understandable given the Soviet Union’s alliance with South Yemen, also known as the People’s Democratic Republic of Yemen (PDRY), which hosted Soviet military installations and benefited from Soviet scholars such as Vitaly Naumkin, who carried out research on the island of Socotra.

The PDRY, which existed from 1967 until unification with North Yemen (the Yemen Arab Republic) in 1990, was the only Arabian Peninsula state that aligned with the Soviets during the Cold War. As the most progressive and only Marxist regime to come to power in Arabia, the PDRY served as a key Soviet ally located along the Bab el-Mandeb Strait, a major maritime chokepoint that links the Gulf of Aden to the Red Sea.

Today, as President Vladimir Putin seeks to expand Russian influence by capitalizing on old Soviet links with countries across the Middle East and Africa, the Kremlin is attempting to assert itself as a stabilizing force in southern Yemen. From Putin’s perspective, southern Yemen is a natural region for Russia to exercise influence based on its Soviet past.

For years Russia has emphasized that settling Yemen’s “southern question” is essential for resolving the country’s civil war. In this sense, Russia is unique as hardly any other major global power has reacted to pro-secessionist rallies held by the STC in Aden and other parts of southern Yemen with as much sympathy or understanding as it has.

The STC takeover of April 2020

On April 26, the STC staged a “coup” in Aden, declaring South Yemen’s independence and essentially tearing the Riyadh Agreement to shreds. A power-sharing deal signed in November, the Riyadh Agreement was intended to resolve the conflict between the Abu Dhabi-sponsored separatists and the Saudi-backed Hadi government that manifested in intense violence in August. The STC justified its recent declaration of autonomous rule in Aden by pointing to the UN-recognized Yemeni government’s corruption and its refusal to pay the salaries of public-sector staff. Three months earlier, the STC pulled out of committees implementing the Riyadh Agreement, citing violence in Shabwa Province that the separatists accused the Yemeni Muslim Brotherhood (itself a part of the Hadi government) of waging.

As a result of the STC’s latest declaration of self-rule in Aden, there are now new dynamics in play across southern Yemen. Against the backdrop of the global COVID-19 pandemic and following major floods in southern Yemen and the beginning of Ramadan, the STC picked a special moment for its latest declaration of independence from the North. Countless variables are at play and it is unclear at present how political events will unfold in Aden, especially given the fact that various groups in southern Yemen — even including some with separatist aspirations — are opposed to the STC.

It is a safe bet that Moscow will seek to leverage its relations with the STC and the secessionist group’s backers in Abu Dhabi on the one side, while also pursuing negotiations with Hadi’s government and Saudi Arabia on the other, to expand Russia’s influence as a stakeholder in Yemen’s multi-sided civil war. Moreover, with the UN failing to bring peace to Yemen, there has been speculation that Russia may try to endorse the UN’s role to push Yemeni factions and their external patrons toward a lasting political settlement.

Yet concluding that Russia will inevitably lend its support to a split of Yemen along North-South lines would be misguided. Nonetheless, the fact that Moscow has refrained from criticizing the STC for usurping control of Aden, both this month and last year, leaves the door open to a stronger partnership between the two sides.

On April 28, Russian Deputy Foreign Minister Mikhail Bogdanov spoke to Aidarous al-Zubaidi, the STC’s president, about the situation in Aden, urging him to return to the negotiating table. According to the Russian Foreign Ministry, “Russia reaffirmed its support for efforts to find solutions to urgent problems on Yemen's domestic agenda through an inclusive intra-Yemeni dialogue, mediated by the UN special envoy for Yemen, Martin Griffiths.” The Aden-based separatist group’s leader told Bogdanov that self-rule in southern Yemen would help with both recovering from recent flooding and coping with COVID-19.

Improved Russia-STC relations must be understood within the wider geopolitical context of Moscow’s ties with Abu Dhabi, which supports the STC for multiple reasons including a shared vitriol for the Muslim Brotherhood. The UAE has been an increasingly influential actor in Moscow’s policy vis-à-vis the Arabian Peninsula and greater MENA region. This relationship has strengthened significantly since Russia and the UAE signed a Declaration of Strategic Partnership in mid-2018, which deepened bilateral cooperation across a host of domains from security and tourism to technology and investment. Putin’s trip to the UAE in October 2019 was further evidence of Moscow and Abu Dhabi’s deepening partnership.

Above and beyond Moscow’s engagement with the STC, there has been growing alignment between the UAE and Russia regarding the conflicts in Syria and Libya. Concerning President Bashar al-Assad’s and Libyan General Khalifa Hifter’s legitimacy, Abu Dhabi and Moscow have much more of a common understanding than Abu Dhabi and Washington do.

With regards to southern Yemen, the UAE likely considers it a safe bet that Russia — more than any other permanent UN Security Council member — would be the power most amenable to working with a divided Yemen that (at least to some degree) legitimizes an STC administration in Aden. By the same token, Russia will be keen to approach the STC in a manner that does not upset — or at least minimally harms — Moscow’s balanced “strategic neutrality” in Yemen’s multi-sided conflict.

With Russia committed to recognizing Hadi as Yemen’s legitimate president and supporting efforts to defend Yemen’s territorial integrity, while also working to improve Moscow’s ties with both Riyadh and Muscat, Putin’s government will act cautiously when it comes to balancing these various actors against one another.

The STC’s latest declaration of independence has ramifications for relations between Riyadh and Abu Dhabi that have yet to be realized. Russia has capitalized on tensions between these two Arabian Peninsula powers in the past, and Moscow can be counted on to continue efforts to benefit from them going forward. When it comes to the STC, Russia will probably use its engagement with the group to further strengthen Moscow’s partnership with Abu Dhabi while also applying more pressure on Saudi Arabia. Ultimately, regardless of how Saudi Arabia and the UAE decide to deal with their conflicting interests in Yemen, both Gulf states are turning to Russia as an outside go-to-power that is playing a more muscular and diplomatic role in the MENA region’s security landscape.

Will Russia further legitimize the STC?

Although there is virtually no international support for dividing Yemen along North-South lines, the rest of the world is currently preoccupied by the COVID-19 pandemic and is paying far less attention than usual to the conflict in Yemen. This may have prompted the STC to make its bold move on April 26. Odds are Russia will remain cautious and quiet in relation to the STC’s “coup” while observing how the situation unfolds in Aden and elsewhere in the South. Having hedged its bets by investing in good relations with all the major actors in Yemen, Russia will likely try to maintain this balance.

At the same time, Moscow is pragmatic and realistic about the issues that Hadi’s government has failed to overcome, including institutional weaknesses, a lack of accountability, failure to effectively unite Yemenis against the Houthi rebels, and perceptions that it is Riyadh’s “puppet” regime. Such problems on the part of Yemen’s exiled government may prompt Russia to lend greater support to the STC in the weeks and months ahead, especially if the UAE-backed group proves capable of defending its independence and governing in ways that earn it more favor in southern Yemen.

Giorgio Cafiero (@GiorgioCafiero) is the CEO of Gulf State Analytics. The views expressed in this article are his own.