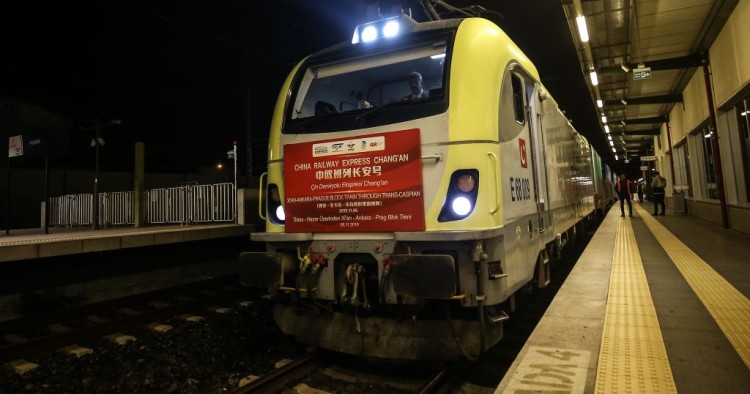 Ocean shipping accounts for over 90 percent of the cargo traffic flowing between Western Europe and China. However, rail has become more competitive in terms of speed and cost. As a result, there has been a recent surge in China-Europe container train volumes. Railways are carrying a greater range of cargo.1 And commercially motivated state-owned as well as private companies are eagerly working to further expand rail freight services.2 A 2017 study commissioned by the International Union of Railways (UIC) estimates that China-Europe rail services’ share of trade by volume could double over the next decade.3

China’s Belt and Road Initiative (BRI) has been a powerful driver of the development of existing and new Eurasian rail routes. A web of competing and complementary rail lines has begun to form across the Eurasian landmass. Railway cargo service between China and Europe has fast become a compelling “middle option” — cheaper than air and faster than sea. And the Trans-Caspian International Transport Route (TITR), rebranded the “Middle Corridor,” could emerge as a significant multimodal artery within Eurasia’s evolving commercial transportation network.

Maritime shipping is the dominant mode of China-Europe cargo transport while air freight carries many times the value of goods traveling by rail.4 Nevertheless, rail freight, which occupies a “middle” market niche in modern supply chains, is gaining popularity and has the potential to expand its market share. National rail companies, freight forwarders, and courier firms have delivered reduced trade costs. Shortened transit times and improved service reliability have made rail freight an attractive alternative for time-sensitive products. The increased frequency of scheduled container block trains, growth in the number of terminals of origin and destination, and variety of routing options offer shippers more flexibility than sea and air transport.5

The Middle Corridor is a multimodal (land/sea) transport route connecting China and Western Europe that charts a passage between Russia in the north and Iran in the south. This route, which includes 4,256 km of railways and 508 km of sea transit, extends from the Chinese-Kazakh border to Europe, passing through Kazakhstan, and via the Caspian Sea through Azerbaijan and Georgia. From there, one of the route’s branches arches across Turkey and through the Marmaray Tunnel under the Bosporus Strait while the other runs across the Black Sea to Ukraine and Romania.

The Middle Corridor (or TITR) lies at the intersection of economics and geopolitics, creating opportunities for landlocked regional countries to overcome the twin challenges of distance and dependency. More to the point, it provides them access to world markets6 as well as strategic diversification away from reliance on Russia.

The impetus for the creation of the TITR came with the signing of an agreement in November 2013 by Azerbaijan, Georgia, and Kazakhstan to establish a Coordinating Committee for the development of a multimodal Trans-Caspian shipping route.7 The institutional framework arising from this initial effort consists of the International Association TITR, an eight-member Managing Board, the Transport Consortium, and the Working Group. To date, these entities have focused on facilitating the reduction of administrative barriers to the processing of cargo and containers; helping introduce competitive and transparent tariffs; and seeking to attract transit and foreign trade cargo.8

The Northern Corridor, or more specifically the Trans-Siberian Railway (SR) through Russia, remains the most popular Eurasian route for containerized freight shipment. However, the appeal of the Middle Corridor is growing. The completion in November 2017 of the Baku-Tbilisi-Kars (BTK) railway — also known as the “Iron Silk Road” — is one of the most important achievements in enhancing the competitiveness of the TITR.9 Chinese officials regard the BTK line as significant progress in the joint implementation of the overland “Belt” segment of the BRI.10 The development of Caspian ports facilities has also boosted the competitiveness of the TITR. Azerbaijan and Kazakhstan are building new seaports or upgrading older ones. The Baku International Sea Trade Port (Alat), the biggest multi-purpose port in the Caspian Sea, was commissioned in May 2018. Kazakhstan’s Aktau port has been expanded and outfitted with new loading equipment, rolling cargo, and a ferry complex.11 Georgia is modernizing its freight train network, expanding the capacity of the Batumi and Poti ports with support from the U.S., and constructing a new deep sea port in Anaklia, mainly for bulk vessels.12

Over the past two years, new freight services also have been launched, such as the lines linking Venlo in The Netherlands and Istanbul; Łódź in Poland and Istanbul;13 and Istanbul and the Chinese port of Lianyungang.14 In April 2019, a regular feeder service from Lianyungang to Aktau in Kazakhstan and from there to Baku was established.15 The same month, at the Second One Belt, One Road Forum held in Beijing, Azerbaijan’s ADY Container LLC and China’s Xi’an Continental Bridge International Logistics Co. agreed to launch a total of 30 container trains by the end of the year, with a targeted volume four times larger than in 2018.

Another leap forward for the TITR occurred on Oct. 17 of this year, when a container block train departed from the Chinese city of Xi’an to Prague. Running along the Middle Corridor, this was the first freight train to travel the BTK railway to Europe through the Marmaray rail tunnel in Istanbul.16 A week later, Grampet - Grup Feroviar Roman (GFR), GR Logistics and Terminals LLC (Georgia), and ASCO Logistic CJSC (Azerbaijan) agreed to establish a consortium that will operate regular shipping between the Black Sea ports of Constanta (Romania) and Batumi/Poti (Georgia).17

TITR member companies and transit country governments are collaborating to increase the freight flow along this route. The approval of TITR tariff rates in 2018 is but one example that “corridor cooperation” is possible and is in fact taking place.18 In pursuing new business, the TITR Association has joined forces with FERRMED, a non-profit multi-sectoral business association based in Brussels.19 At the same time, the proliferation of Eurasian rail transport routes has unleashed competition among various actors.

Competition between transit countries has heated up, as each party seeks to establish itself as a regional logistical hub and “value-added” production site. The expectation is that revenue earned by states that host logistics centers in which trains from China arrive and from which they depart will foster the development of companies operating in the transportation, forwarding, and logistics sector and generate increased revenues from tariffs.

The multi-stage construction of Baku International Sea Trade Port lies at the heart of a plan to create a free economic zone that will make Alat a production center as well as a transportation nexus linking the west (Turkey and the EU), south (Iran and India), and north (Russia).20 Likewise, Georgian officials envision the country’s position along the Middle Corridor as an opportunity to transform it into a major logistical hub within the Asia-Europe transit area, to unlock investment, and to help create industrial bases throughout the country.21

The race is on to establish the best facilities and the most preferential conditions for business not just among transit countries along the Middle Corridor but also among cities at its extremities, which are seeking to position themselves as Eurasian “gateways.” After all, China-Europe rail links are treated as an important element of local economic development strategies. The competitive landscape is changing in Europe, with the growing focus on inland (or dry) ports.22 Chinese city governments, too, are competing fiercely to increase the numbers of trains on their routes as they seek the associated economic benefits and look to play a role in implementing the BRI.23

The build out of Eurasian rail transport corridors has also given rise to a complex competitor-partner relationship between the European Union (EU) and China. The EU plans to invest as much as €2 billion as part of its plan to extend the Trans-European Transport Network (TEN-T) to the Eastern Partnership countries, which include Azerbaijan and Georgia. The European Commission and the World Bank have presented an Indicative Investment Action Plan that identifies priority projects in the relevant countries.24 The EU recently branded Beijing a “systemic rival,” and European officials have expressed reservations about the BRI. Nevertheless, recent EU official documents declaring infrastructure connectivity to be a priority, clearly state that it is a basis for EU-China cooperation and development.25

Meanwhile, in the face of ambitious rail connectivity initiatives that could challenge its dominance in the post-Soviet space, Russia is not standing idle. A variation of the Asia-Europe rail connection was recently launched by Maersk, combining the carrier’s short-sea shipping networks at both ends of the service with rail freight through Russia and providing transit times competitive with China-Europe rail services via Kazakhstan.26

The Middle Corridor is taking shape as much despite U.S. policy as because of it. Its development aligns with several American foreign policy objectives, in that it promises to boost European economic growth, provide options for two major non-NATO partners (Georgia and Azerbaijan) as well as Ukraine, and support the sanctions regimes against Iran and Russia. Senior Trump administration officials have expressed support for specific infrastructure projects — such as, notably, Georgia’s deep-water port project in Anaklia27 — but without having cast them as part of a broader regional agenda.

During the 1990s and especially with the advent of the American military campaign in Afghanistan, the South Caucasus had been a focal point of U.S. attention. Yet, over the past decade, in the face of Russia’s dominant position and China’s growing footprint in the region, U.S. attention has diminished. Visits by Vice President Mike Pence in August 2017 and then-National Security Adviser John Bolton in October 2018 appeared to signal renewed U.S. interest in the South Caucasus. However, clear outlines of a new U.S. regional policy have yet to emerge. Meanwhile, the nascent U.S. Indo-Pacific strategy to compete with and counter China seems focused on the maritime domain, rather than on the Eurasian heartland. The absence of a robust transatlantic dialogue has inhibited the development of a coordinated Western approach to the Middle Corridor.

Rail transport still constitutes only a small fraction of global trade; sea and air routes carry the bulk of goods moved between China and Europe.28 It is unlikely that Eurasian rail transportation will challenge the primacy of maritime and air cargo trade. However, freight shipment by rail is becoming more competitive in cost and delivery time. The Middle Corridor — part of an emerging network of revitalized transportation routes and new trading hubs stretching between China and Europe — is gaining popularity as well. And while there seems little prospect of its eclipsing the Northern Route, it could achieve the modest status of an efficient subsidiary corridor in this evolving network and provide significant benefits to the countries along its route.

Dr. John Calabrese teaches US foreign policy at American University in Washington, DC. He also serves as a Scholar in Residence at the Middle East Institute where he is directing MEI's project on The Middle East and Asia (MAP). The views expressed in this article are his own.

20. “Port of Baku at the crossroad of global transport corridors,” PortSEurope, April 30, 2019, https://www.portseurope.com/port-of-baku-at-the-crossroad-of-global-transport-corridors/.

21. Iza Gigauri, “Economic Expectations of the Belt and Road Initiative for the South Caucasus, with Emphasis on Georgia,” Business and Economic Research (Macrothink Institute) 9, 1 (2019): 190-195.

28. David Fickling, “Railways Put China on a Belt and Road to Nowhere,” Bloomberg, November 5, 2018, https://www.bloomberg.com/opinion/articles/2018-11-05/trans-asian-rail-puts-china-on-a-belt-and-road-to-nowhere; and Hillman, “The Rise of China-Europe Railways.”