Severe sand and dust storms are an underrated risk in the Gulf region, despite mitigation measures 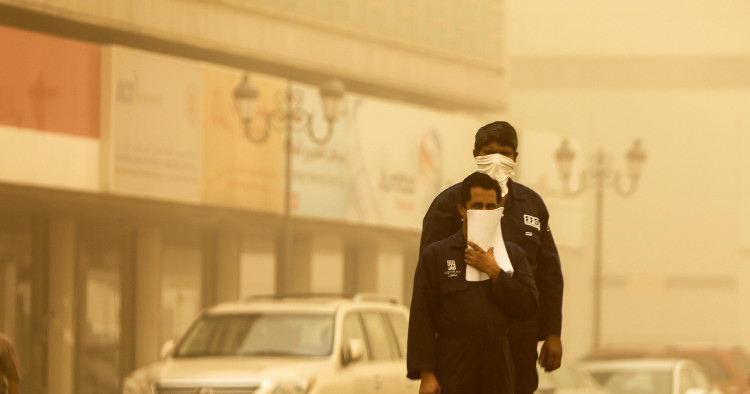 The precise causes of sand and dust storms (SDSs) are not fully known. Cloaked in mystery, SDSs are often perceived across the Gulf region as largely ungovernable natural phenomena. Since damage from SDSs is seen as inevitable, there are few attempts to divert Gulf water inland or build vegetation or walls to protect against winds. Such quietism, however, ignores the fact that anthropogenic dust storms, while three times less frequent than natural ones, have sources that lend themselves to remedy. While quantifying the sources of SDSs is challenging, global dust modeling enables an understanding of the anthropogenic contribution to their occurrence. Regional actors, armed with a better understanding of these causes, are beginning to respond in the face of intensifying SDSs.

Within the Gulf, SDSs often emanate from countries with limited vegetation, where there are fewer barriers to strong winds. SDSs hit vegetation-poor Kuwait more than three months a year. In comparison, SDSs affect Bahrain 5.6% of the year, Qatar 7.1%, and Abu Dhabi 3.9%. Winds in Kuwait carrying sand and dust can also reach 93-109 km per hour, reducing visibility to almost zero.

In Saudi Arabia, SDSs impact almost all parts of the country, including the capital of Riyadh. In the north, these storms combine with strong winds that sweep over Kuwait. Some SDSs are caused by the extremely dry al-Bawareh winds, which are churned up by atmospheric pressure on the eastern basin of the Mediterranean and barrel down on the eastern Arabian Peninsula and the Empty Quarter, as well as Iraq and Kuwait. Major sand storms in Saudi Arabia form from as far afield as Libya. These SDSs halt maritime traffic in Egypt first, then whip toward the Arabian Peninsula, before reaching Qatar, Bahrain, the United Arab Emirates (UAE), Oman, and Yemen. Last year in Iran, seven provinces were hit by SDSs. In previous years, at least 14 provinces were affected, choking local residents. In addition, Iran’s Sistan and Baluchistan Province also experiences SDSs as a result of anticyclones over Central Asia.

Locals in the Gulf region are accustomed to SDSs and attach different names to these storms. In the UAE, they are called al-Shamal, a reference to the northern wind blowing from Iraq to the Gulf Arab states. When they are intense, they are known as haboob. The summer Shamal winds hit the Gulf the hardest. The spring season is also hard on western Iraq and the northern parts of the Arabian Peninsula. In Iran, they are called Iraqi and Saudi dust storms. They are also sometimes referred to in Iran and Iraq as ghost, dark, or black storms.

The storms cause sudden rises in river flows, rainstorms, flooding, air pollution, and agricultural damage, all of which degrade the environment, in addition to the direct damage incurred during the SDSs. But these storms, as mentioned, are only sometimes caused by natural phenomena. A World Bank report on the Middle East and North Africa (MENA) region concluded that the increase in anthropogenic dust sources in North Africa, originating from the Sahara, significantly exacerbate SDSs in the Mediterranean and MENA. Other active sources are the dry riverbeds in Saudi Arabia, hydrologic issues along the Jordan River’s eastern banks, and Iran’s salty lakes and deserts. Human-induced land degradation aggravates the problems as well.

Drought, affecting countries like Iran and Iraq, is a potent ingredient in these storms. The industrial construction of dams weakens water streams throughout the region, thus adding to the severity of droughts. Dwindling water underground, poor water management, and salination are also major causes of SDSs. Wetlands drained by Iran to produce food within the country — as sanctions have hindered the import of basic goods — are causing further drought. So too are water-intensive irrigation systems used along the Iranian-Iraqi border, despite efforts by agricultural experts on both sides of the border to introduce alternative irrigation methods in the area.

Deforestation and desertification are other known causes of SDSs in the region. Some 90% of the Arab world is covered by deserts and thus vulnerable to winds; when combined with other weather phenomena, these cause cold fronts and sand storms. Some winds come from southern Iraq, where, like in Kuwait, the government is striving to reduce so-called flying dust. Meanwhile, local residents attempt to cultivate wind-blocking vegetation. U.N. scientists expect to see 300 SDS events a year in Iraq by the end of the decade — a significant increase from the 122 dust storms a year recorded in early 2013.

The Arabian Peninsula is located in a severe dust belt. SDSs spread into the atmosphere mineral dust with varying textures depending on soil exposure levels, including quartz, feldspars, calcite, dolomite, micas, amphiboles, and pyroxenes. The dust deposits can sometimes be beneficial for the climate as sources of micro-nutrients for ecosystems, but dusts may also damage crops and cause respiratory diseases by transporting pesticides, herbicides, heavy metals, and radioactive materials. The storms can spread radioactivity globally, impacting climate change in ways that are still unknown. In addition, wars and heavy militarization in the Gulf have also released radioactive hazardous materials that could potentially be carried by SDSs across the region. In the case of dust blown from the Sahara Desert to France last year, analysis showed abnormal levels of radiation believed to be a remnant of French nuclear tests in Algeria during the 1960s, but scientists insisted the levels of radiation contamination were safe and around those naturally present in minerals.

According to the World Meteorological Organization (WMO), airborne dust absorbs and scatters solar radiation, reducing the amount that reaches earth's surface. Dust also absorbs long-wave surface radiation, and re-emits it in different directions. It is also known that these storms cause air pollution. Although SDSs do not categorically cause climate change, according to MEI Director of Climate and Water Program Mohammed Mahmoud, increased dust or sedimentation on ocean surface water can lead to higher solar radiation absorption in oceans. This warms the sea surface, and can thus raise regional temperatures and amplify extreme weather events.

Among the SDS-related factors suspected of indirectly causing climate change are deposits of fine airborne particles and mineral dust into seas and the Indian Ocean as well as sedimentation that provokes chemical emissions when dissolution occurs as particles sink. In Gulf waters, SDSs are a main cause of sediments that can clog up nearby lakes and marshlands, and sometimes even cover large swathes of the Gulf waterway. Even renewable solar panels malfunction when covered by dust. Given these factors, it becomes evident that SDSs participate in a vicious cycle: Climate change causes the storms and the storms exacerbate the impacts of climate change. Socio-economic life revolves around weather patterns, so livelihoods are severely threatened.

Scientific modeling can mitigate SDSs. In Europe and Africa, success in stabilizing surface exposures to dust has come through promoting vegetative cover, adopting crop and soil management practices, as well as installing fences to protect against blowing sands and dust that directly challenge human activity. Coordinated monitoring, modeling, forecasting, and early warning systems are also necessary to mitigate impact. Besides existing early warning systems, countries in the MENA region must adopt policies to mitigate SDSs. More investments in forecasting technology are needed, as are improved agricultural residue management and agroforestry.

Following encouragement by the U.N., regional governments should take more action. A lack of environmental awareness leaves unaddressed the challenges posed by sand storms. What limited information there is paints a grim picture. Welfare loss in MENA due to dust concentration and storms amounts to $150 billion annually. Iraqis disproportionately suffer premature death, according to the World Bank, while in Iran SDSs cause at least a 1% increase in cardiovascular morbidity.

These efforts can be bolstered by effective national and regional subsidy policies for early intervention against SDSs. States, working domestically and across borders, must devise master plans to identify SDS trends, hotspots, sources and drivers, mitigate health, environmental and economic impact, and take preventative measures.