A Shared Dream for a 'Happy Middle East' 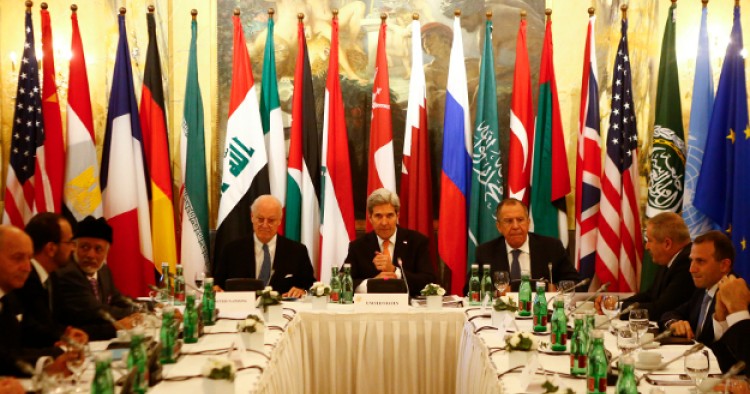 This is an English translation of an article that appeared in Al Hayat newspaper on December 19: http://www.alhayat.com/m/opinion/12875824

We were together in Beirut as part of a group of experts, ambassadors, and possibly even former intelligence officers, representing nations “implicated” in the Syria crisis.

Syria was the subject of our discussions over two days, along with the disastrous situation in the Middle East, both presently and the situation to be expected in the future.

The meeting was organized by the US- and Arab-backed Middle East Institute. The first day’s sessions were depressing and frustrating.

We exchanged blame, as some of us insisted on toeing their governments’ respective lines, justifying the morally and politically unjustifiable, from brutal bombardment to indiscriminate killing of civilians in Syria, when they were supposed to behave as impartial experts.

Beirut’s rainy weather could not wash away the frustration. Nor could the optimism the Lebanese capital exuded. Despite Lebanon being without a president for two years, its festive climate and preparations for the Christian holidays have it in better shape than many capitals whose governments are proud of their stability made possible by the iron fist of their security services.

On the second day, the discussions became even more heated. One of us got in a row with an Iranian expert, who had equated Wahhabism to Nazism, creating tension in the hall. If anything, this was a sign politics had hit an impasse, and that there was little appetite for peaceful existence away from the logic of might is right.

We all felt more frustrated and dejected.

In the last session, the moderator, a Lebanese-American woman who has led the Middle East dialogue team for many years, asked the panelists to think about the future as boldly and freely as possible.

One of us let his imagination go and suggested the idea of a “Happy Middle East”. “Let’s assume wars are over, and all crises somehow disappeared. Let’s imagine the Arab Gulf countries are now on good terms with Iran, the situation in Iraq and Syria has stabilized, Egypt has stood back on its feet, and all concerns towards Turkey have been resolved,” he said.

“Let’s imagine all this is repeated throughout the Middle East, which is now prosperous, stable, open, and harmonious, from Iran in the east to Mauritania in the west, and Aden in the south to Istanbul in the north. Let us dream of a happy Middle East, and think together about how the potentials and capacities of its nations and peoples could be enlisted to achieve this dream, then put all our ideas in a book about the Happy Middle East to replace all the books that speak of a Middle East in perpetual crisis without hope,” he continued.

After a period of silence, our colleagues starting commenting. The dream, as it were, sent out positive vibes in the room, encouraging us to discuss it further, even if it was a tad utopian. As a Lebanese American colleague put it, “It’s not an impossible dream if there were long-term strategic planning to go along with it.”

We went on, dreaming and thinking about the strategy.

The Iraqi colleague said, “Basra and all of Iraq, with its Euphrates, would supply an abundance of water and food to Saudi Arabia and the Gulf nations.”

The Turkish expert said his country would be a conduit for Iraqi and Gulf oil to the global market.

And so went on the talk of the Happy Middle East for nearly an hour, in a very positive climate, in which the middle-aged experts rekindled their youthful spirits as though they were sitting in a virtual lab carving out a different, promising future for the Middle East.

The Emirati speaker tried to combine the utopian dream with a more realistic approach. He proposed replacing rivalries with “integrated functional relations” among and between the nations of the Happy Middle East.

As an example, the regional nations, with support from friendly world powers, could tackle crises like the water crisis—a major problem that poses an existential threat to some countries in the Middle East no less serious than conflicts, extremism and obscurantism.

His argument was if the warring countries could set their differences aside and focus on finding solutions to their water and food security problems, and address the concerns of their youth, they would soon find themselves in a much better state.

A former US ambassador present, who had served in several Arab countries, had probably experienced the worst our world has to offer. For one thing, he had been nearly killed in a massive suicide blast in an Arab capital.

The former ambassador reminded those present of the Helsinki Accords, concluded in 1975 at the height of the Cold War between the Soviet Union and the West.

The agreement was the start of unprecedented cooperation between the two camps, he said, which reduced the intensity of the conflict based on “mutual non-interference in internal affairs; parity; respect for citizens’ rights and political and civil freedoms; respect for sovereignty and territorial integrity; peaceful resolution of conflicts without resorting to force; peoples’ right to self-determination; fostering of cooperation; and respect for international commitments and covenants in line with the UN Charter and international law.”

The argument was that if regional countries could implement these principles, the Middle East would improve, and would no longer remain the world’s most violent region.

Today, the Middle East is far removed from this dream, but there is nothing to stop us from dreaming.

Europe emerged from the Second World War in a horrific state, but then embarked on a journey of change with the dream of unification. Europe has now completed 75 years of prosperity, the longest period of peace in its history.

The same could be said of Asia, which was long struggling with crises and poverty. Asia, too, began its journey with the dream of its economic tigers, who have since turned the continent into the world’s new economic center of gravity.

The Happy Middle East is a dream born out of crisis, desperation and doom. There are many obstacles: lack of democracy; monopoly of power and wealth; corruption; sectarianism; and ideological disputes. This is not to mention the duplicitous discourse of countries like Iran, which speaks of Islamic cooperation while deploying its militias to fight alongside tyrants.

If we surrender to all these obstacles, the dream would become impossible and the quest to achieve it would be stopped dead in its tracks.

I am certain it is not we alone who are dreaming about a Happy Middle East. About half a century ago, the late ruler of Dubai, Sheikh Rashid bin Said, dreamt for his city to become like Basra, which was once described as the Venice of the Gulf. Through good planning and hard work, the dream became a reality, and today, Dubai is the region’s and the world’s greatest port of call.

As we sat putting the final touches on this joint essay, we received—without planning it—a tweet from his son, Sheikh Mohammed bin Rashid, the Emir of Dubai, as though he were with us in the concluding session in Beirut.

He wrote: “Our Arab region needs wisdom to unravel its political logjams, good governance to manage its human and financial resources, and proactive governments that could lead a real process of development.”

The tweet was the best conclusion for what we wanted to say, especially since it came from the man behind an Arab success story that had begun with a dream, and today has materialized into a city that tops the list of the world’s happiest places.

The dream of the peoples and nations of the Arab region and the Middle East for a future far from violence, extremism, misery, tyranny, and corruption is now the dream.

It is a happy dream, but we can make it a reality.