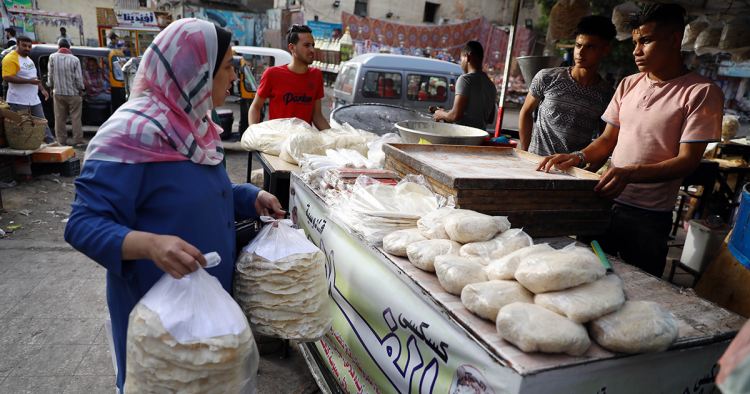 While the holy month of Ramadan is known for increased food consumption in Egypt and other Muslim-majority countries, Elham Mohamed, 40, a government employee, said it was very difficult for her just to make ends meet this year.

“I had to give up many of the items I usually buy during Ramadan,” she said. “Prices have gone crazy. Even the basics, such as bread, rice, sugar, flour, eggs, and cooking oil, have all gone up,” she added.

After nearly 20 years of working as an employee at a government office, Mohamed’s monthly salary is EGP3,000, or $162. “We get allowances, bonuses, and other little things here and there. Yet, all the increases I get are not enough now to buy one kilo of meat from the butcher, or even two chickens to feed my three children and husband,” Mohamed said.

So when she read in government-owned newspapers the latest figures announced by the Central Agency for Public Mobilization and Statistics (CAPMAS), declaring that the inflation rate had jumped to 12.1% in March, compared to 4.8% in 2021, she was not surprised.

“I don’t know what inflation means exactly, but prices have increased by at least 20-30%, and sometimes 50%. It can’t be only 12%,” said Mohamed while describing her hectic daily journey shopping for food.

Thus, Ramadan delicacies such as nuts, sweets, and dried fruits became unaffordable for Mohamed and millions of Egyptians who are considered poor or live under the poverty line — 30% and 4.5% respectively out of population of 103 million. “I only got dates this year, and some peanuts. That’s all we can afford. The other items such as almonds, hazelnuts, and raisins are now luxuries and I can’t buy them,” she added.

According to the International Monetary Fund’s (IMF) latest World Economic Outlook report, released last week on the sidelines of the IMF and the World Bank Group’s annual meetings, the Fund expects Egypt’s inflation to reach 7.5% in 2022 and to accelerate to 11% in 2023. The annual urban consumer price inflation rate — used to measure the actual impact of price changes on people’s lives by gauging price differences in household goods and expenses — reached a three-year high of 10.5% in March. Analysts are forecasting annual inflation will continue to rise in the months ahead. Estimates range from 13% to 15%, before levelling off by late summer.

What makes matters worse for Mohamed and other Egyptians is that most of the Ramadan items she referred to are imported, like many other basic products the country depends on, starting with wheat and fuel, and ending up with technology and machinery.

After the Central Bank of Egypt (CBE) decided on March 21, for the second time in less than six years, to devalue the local currency by 15%, prices immediately skyrocketed, and are expected to continue rising for the next year, at least. Overnight, the U.S. dollar went from EGP15.6 to EGP18.5. The CBE increased interest rates, with major government banks offering 18% on one-year certificates of deposit. According to informed sources, with pressure mounting on Egypt’s foreign reserves, another hike in interest rates or further devaluation of the local currency cannot be excluded in the coming weeks. In an attempt to mitigate the harm to consumers from the devaluation, the government set a pegged dollar exchange rate (EGP16 to the dollar) for imports of basic goods and raw materials, including wheat.

Finance Minister Mohamed Maait recently stated that higher international wheat prices could cost Egypt nearly $1 billion in the new fiscal year. He also said that Egypt imports around 100 million barrels of crude oil a year, pointing out that the 2021-22 budget had been calculated on the basis of oil costing $60 a barrel; it currently stands at over $100.

However, Petroleum Minister Tarek al-Molla argued that the surge in natural gas prices in response to the Russia-Ukraine war would allow Egypt “to maximize natural gas exports to in part offset the increased cost of importing oil and petroleum products and wheat supplies.”

The local price hikes can be largely attributed to spiking inflation rates worldwide after Russia launched its invasion of Ukraine on Feb. 24, accompanied by a sharp downturn in tourism revenues, a rise in oil prices, and an outflow of foreign capital in light of expected increases in U.S. interest rates.

As was the case with the economic losses endured during the pandemic, Egypt’s government had no option but to resort to the IMF, yet again, for a third loan. Oil-rich Gulf countries, namely Saudi Arabia and the United Arab Emirates, that have supported President Abdel-Fattah el-Sisi since he removed the late Muslim Brotherhood President Mohamed Morsi in 2013, also rushed to his rescue again, backing the dwindling CBE reserves, as well as pledging investments to buy privatized public sector companies and shares in banks and profitable firms, with a total of nearly $22 billion. This time around, however, there was even a new contributor: After mending souring ties between the two countries, Qatar pledged nearly $5 billion in investments as part of the total $22 billion Gulf investment pot.

Hala el-Said, Egypt’s minister of planning and economic development, recently stated, “The government plans to contain the inflationary wave by lowering its planned increase in public investment allocations to 15.2%, down from the 16.2% hoped for prior to the Russian-Ukrainian conflict.”

In an effort to ease the impact of rising prices, the government has also introduced a mitigation package worth EGP130 billion ($7 billion) that will, among other measures, boost public sector wages and pensions, introduce new tax measures, and expand the country’s cash transfer program.

In addition, the Ministry of Finance announced an allowance of 8-15% of basic salaries for all government employees, ranging between EGP100 ($5.4) and EGP400 ($21.6). The government will also increase pensions by 13% and provide EGP2.7 billion ($150 million) to add 450,000 more families to the nearly 3.7 million already benefiting from a government social program aimed at providing cash payments to the poor, at a total cost of EGP19.5 billion ($1.05 billion). Finally, the ministry is also considering tax relief for government employees to cope with increasing prices.

Economic analysts believe the Egyptian government’s measures amount to temporary pain killers, and that more structural reforms that would lead to job creation and increase agricultural and industrial outputs are what is needed to ensure long-term economic stability.

For decades, and namely since the oil boom of the 1970s, Egypt has had more of a rentier economy, depending on cash revenues from tourism, remittances of Egyptians working abroad, and Suez Canal revenues. The vulnerability of these sources, particularly the first two, to outside shocks means that any regional or international crises can easily shake the economy and send the government into crisis mode, seeking aid from international donors or regional allies. Such aid does not come without a price.

That price is always paid by the country’s poor majority, in both the short and long terms. With foreign debt going up from nearly $40 billion when President Sisi first took office in June 2014 to $145 billion this year, future generations of Egyptian certainly have a lot to worry about. Critics blame rising debt on the expensive so-called “national projects” that Sisi launched since taking office eight years ago, including the building of the “New Administrative Capital,” a high-tech complex that has cost billions of dollars. The official launch of the new capital was set for June 2020, but has been postponed repeatedly following the outbreak of COVID-19.

Sisi prides himself on revamping Egypt’s infrastructure, including the total overhaul of the country’s roads and railways and the rebuilding of many bridges, catapulting the country over 90 places on the international Road Quality Index, from 118th in 2014 to 28th in 2021. While these ambitious projects are seen by the government as crucial to attracting future investments and providing jobs, many Egyptians wonder whether they are such a priority, compared to their direct, immediate needs in areas like education, health, and basic living conditions.

More surprising to Egyptians who suffer daily from the effects of inflation, whether because of COVID-19, the Ukraine war, or government policies, are the positive reports released by the IMF and the World Bank praising Egypt’s continued economic growth.

The IMF has revised its projections for Egypt's real GDP growth in 2022 by 0.3% to reach 5.9%, up from 5.6% expected in January, before slowing down to 5% in 2023, the Fund announced on April 19. Egypt’s projected growth rate is the highest among oil importers in the Middle East region.

The Egyptian government has been more cautious; it lowered its expectation for real GDP growth in FY2022/23 — which starts on July 1 — to 5.5%, down from 5.7% expected in January, amid the ongoing war in Ukraine.

The IMF report also underscored that the war led to significant capital outflows from emerging markets and developing economies like Egypt, tightening financial conditions for vulnerable borrowers and net importers of commodities, and downward pressure on the currencies of the most exposed countries.

Khaled Dawoud is the deputy editor-in-chief of Al-Ahram Weekly and former president of the social-liberal Dostour Party. The views expressed in this piece are his own.