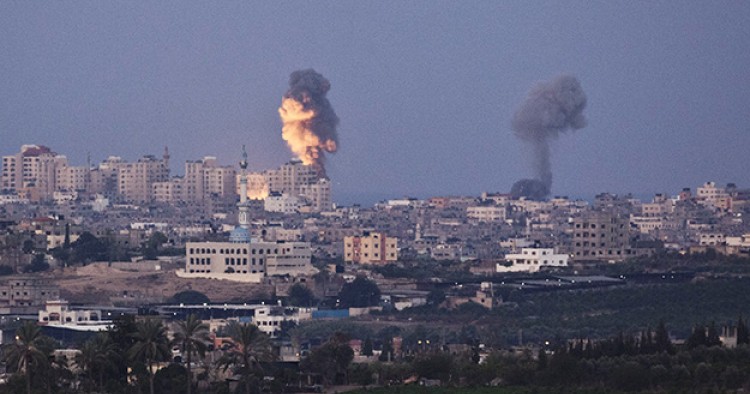 U.S. diplomatic efforts to resolve the conflict between Israel and the Palestinians have in the last year focused on relations between Israel and the Ramallah-based Palestinian Authority, led by PLO chairman Mahmoud Abbas. Yet there is arguably a far more dynamic and perilous front: one that encompasses Israel, Egypt’s lawless Sinai Peninsula, and the Gaza Strip, the latter of which is run by Hamas.

In these critical areas it is not diplomacy but armed conflict that is the norm. In Gaza, Israel and assorted Palestinian organizations, of which Hamas is only the most powerful, engage in endemic if limited skirmishing for tactical advantage. In Sinai, Egypt is mired  in an increasingly “dirty war” against all manner of local and jihadi opponents who have mobilized to contest Cairo’s rule in the vacuum created by the implosion of the Mubarak regime three years ago.

The transformation of Sinai from strategic backwater to frontline security challenge has occurred in a context in which Egypt, for the first time and under the leadership of Field Marshal Abdul-Fattah el-Sisi, views Gaza under Hamas’s leadership as a national security threat. Since the ouster of Mohamed Morsi in July 2013, the new regime has adopted its own set of trade and movement measures against the beleaguered area that rivals, if not surpasses, those imposed by Israel.

Together, these two conflicts have revolutionized Israel’s view of its southern neighbors and have left Gaza in a new position in which it is opposed by Fatah, shunned by Egypt, and is dealing with an Israeli government that is interested in preventing its total collapse.

Since 2004, when Ariel Sharon announced the departure of permanently stationed Israeli security forces and settlers from Gaza, Israel and Hamas have engaged in an often violent contest over the “rules of the game,” but they have also established an inherently unstable but nonetheless reasonably successful security dialogue that has kept an uneasy “quiet” along their shared frontier.

The government of Benjamin Netanyahu would prefer that Hamas not exist, but it is not prepared to become captive to this wish. It recognizes that Hamas represents a relatively strong, responsible power in Gaza, exercising unchallenged authority within its “borders.” Indeed, IDF Southern Command Chief Major General Sami Turgeman told Israel’s Channel Two last year that only Hamas has the capacity to maintain the commitments agreed to under Egyptian mediation in the wake of the last major eruption of conflict in November 2012. “What we want is calm and security in the Gaza Strip,” Turgeman said. “Hamas…has the means and the know-how.”[1]

Turgeman’s declaration acknowledges the Israeli fear that a collapse of Hamas could produce successors who are not Abbas’s Fatah, but jihadis of various stripes who are now challenging Egypt’s rule in Sinai and beyond. Israel’s anxiety about this unwelcome prospect is only one reflection of its self-interested concern to keep an uneasy, armed peace with Hamas. This concern also means that in contrast to Sharon’s intention to force Egypt to accommodate Israel’s draconian trade and humanitarian policies by opening its borders, since the commencement of Sisi’s summer 2013 offensive in Sinai and against Hamas it is Israel that has “blinked”—loosening, if only so slightly, its stranglehold on imports of non-food items like construction material to Gaza. And, as per the agreement reached between Israel and Hamas with Egyptian mediation in late 2012, restrictions on imports of food items have been almost entirely eliminated.

Thus, at a time when the regime in Cairo is more hostile than ever to Hamas, and Israel’s concern about Egypt’s security due to Islamists in Gaza and throughout Sinai is most keenly felt, Israel has emerged as a key advocate of Hamas’s continued rule and has taken practical measures to moderately offset the harder Egyptian policy line.

The results? In 2013, the Gaza-Israel front was the quietest in recent memory. Israel and Hamas each kept their powder dry, and Hamas fulfilled its responsibilities as the de facto ruling sovereign, keeping order among restive outliers from Islamic Jihad and assorted tribal and family-based jihadi groups. In fact, last month, Islamic Jihad, which had unleashed the short and essentially harmless missile barrage across the border, released the following statement: “[We] will not break the truce (with Israel).” However, the group’s spokesman added: “[B]ut [we] will retain the right to respond to the Zionist aggression at the right time and the right place.” Netanyahu’s statement was equally ambivalent: “The number of rockets fired from the Gaza Strip in the last year has been the lowest in a decade, but this is not enough for us,” he said. “We will continue acting to ensure the security of the people of Israel both in the south and across the country.”[2]

Unlike Israel and its Palestinian enemies in Gaza, who have established this workmanlike dialogue of sorts, there is apparently nothing at all that Egypt wants to discuss with Hamas, which it has recently outlawed. No one dares mention establishing regular trade relations with Gaza via the border at Rafah, a move that Morsi’s government also refused to implement. Under Cairo’s new regime, Gaza’s economic lifeline—the subterranean tunnels running beneath the Gaza-Egypt frontier—have been all but shut at a monthly cost of $230 million to the teetering Gaza economy. Unemployment has returned to 2008 levels of around 43 percent, and exports are just 9 percent of production. Egypt now argues with an insistence rooted in its own security concerns that it is Israel’s responsibility rather than its own to take the lead in attending to Gaza’s economic needs.

As for Fatah, its officials are hoping, without any evidence, that the return of the Egyptian military to unchallenged power offers the best chance for Fatah to return to Gaza in triumph. Some believe that Fatah’s best opportunity lies in defeating Hamas’s rule by increasing broad opposition from within Gaza’s population of 1.7 million. Others suggest that a Palestinian brigade mustered with Egyptian support in el-Arish could march on Gaza and defeat the broad array of Hamas’s and other Gaza-based forces created in the last decade.

Egypt today is exhibiting greater hostility to Palestine in all of its forms than at any time in its modern history. The new Egyptian regime has sanctioned Hamas and likewise has nothing to discuss with Abbas. Sisi has effectively ended Cairo’s interminable, patient mediation of Palestinian reconciliation, leaving a deeply troubled but nonetheless critical process in the deep freeze. And unlike in the past, the Egyptian public seems to hold no great sympathy for Gaza’s predicament. Mubarak could be pressed to open the tunnels underneath the otherwise sealed border and to turn a blind eye to their operation. But Sisi does not need to concern himself with popular Egyptian demands to aid Gaza, which have all but evaporated. He has completely severed the link between Egypt and its sympathy for Palestinian resistance in Gaza, which is now viewed solely through an Egypt-first security prism.

As a consequence, Hamas’s rule in Gaza is in its direst straights since it assumed power in 2007. Egypt has removed itself from the equation for the foreseeable future. The Hamas leadership in Gaza continues to build a record of conflict but also de facto cooperation with Israel, signposts of a deeply troubled and inherently unstable relationship that holds little promise over the long term.