The Societal Roles of CSOs: Evidence from Turkey 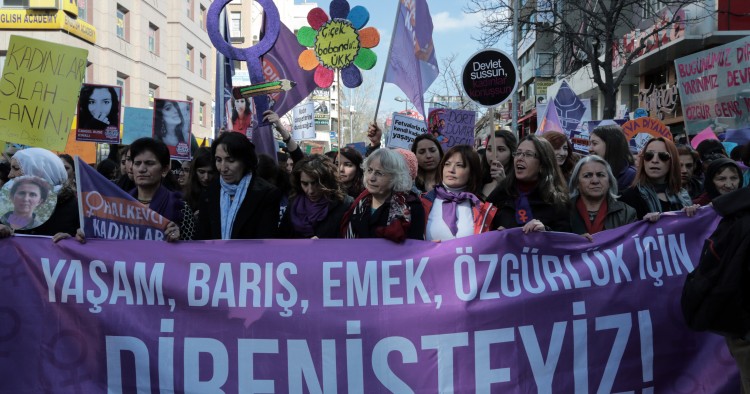 Support for civil society and civil society organizations (CSOs)[1] has been an integral part of endeavors by most major policy makers to advance democratization across the globe, with particular emphasis on the Middle East North Africa (MENA) region since the late 1980s. The role envisaged for CSOs within this context is to increase government accountability, filter the interests of ordinary citizens into policy processes, and advance democratization generally, this process is often connected with human rights and social progress. For instance, one European Union policy document states that “civil society activities are essential for a mature democracy, the respect for human rights and the rule of law.”[2] Moreover, CSO activities “enhance political accountability, stimulate and expand the space for discourse on societal choices and strengthen the consensus for a pluralistic society.”[3] Such statements are illustrative of the generally high regard and expectations held by policy makers with respect to CSOs.

According to figures from the Department of Associations and the Third Sector Foundation of Turkey, Turkey possesses a total of 109,104 associations[4] and 4,634 foundations.[5] These organizations are active across a number of diverse issues, including social aid, education, health, religious services, sports, professional organizations, democracy, law, and human rights (including women’s rights, Kurdish and minority rights, and LGBT rights).[6] Given this diversity in focus, it is perhaps unsurprising that CSOs in Turkey perform a variety of roles in society. Some of these roles can be broadly described as progressive in nature and, others as more regressive. Some of these roles are summarized in Figure 1 below. 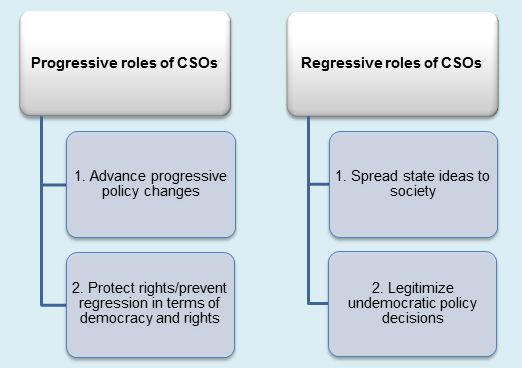 Some years ago a platform was established which sought to change the Turkish Penal system. All the women’s organizations worked collectively and the work of this platform resulted in many changes to principles of Turkish law. So, [women’s organizations] are really effective and have really contributed to changing legislative principles.[8]

A second progressive role the women’s organizations interviewed wished to highlight—with the exception of Islamic women’s organizations[9]—is protecting rights that already exist in legislation from the state’s efforts to remove or block them. Here the impact of the conservative A.K.P. (Adalet ve Kalkınma Partisi) government on women’s rights was emphasized. Women’s organizations stressed the key protective role they were playing vis-à-vis women’s rights, as the government pursued a more conservative agenda.[10] One specific example given by interviewees was the role of women’s organizations[11] in organizing protests and lobbying the state when it had sought to ban abortion in 2012.[12] This collective women’s effort resulted in effectively forcing the state to withdrawn the ban.

These examples of CSOs in action, as well as research on the topic,[13] provide a level of empirical support for arguments that the presence of an active civil society functions to advance democratization.[14] However, while the results do show that women’s organizations play progressive, democratizing roles in society, they also draw our attention to the ways in which CSOs can reinforce state power and function to undermine democracy. In the Turkish case CSOs have done this in two key ways. The first is by spreading the ideas and ideology of the state at a societal level and generating support for them, and the second is by legitimizing undemocratic policy decisions taken by the state.

[The state] give[s] large amounts of funding to religious organizations to run educational projects. These projects then teach children how to pray and read the Qur’an, teach girls that their most important role is to be a mother, and encourage them to be modest and wear a [head]scarf. Ultimately, they are making those children into more conservative adults.[16]

These organizations were also found, by the study, to share particularly close relations with the state and state elite, and in several cases has been established by the state.[17] This assertion is evidenced by the level of cross-over between the state and some Islamic organizations. High-level state representatives were members of these organizations or had previously participated in their activities. Islamic organizations received comparatively high proportion of state funding. There were even instances of active support given by Islamic organizations to the state on key political issues.[18] The latter finding, that the state is actively involved in creating new women’s organizations, was reported by almost half of all interviewees from Kemalist, Kurdish, and feminist women’s organizations (13 of 30 organizations interviewed). Reports of this direct manipulation of CSOs are substantiated by the media as well.[19] The issue of state co-opting ideologically similar CSOs in Turkey is discussed elsewhere in detail,[20] but of particular importance is the effect that these discussions have on Turkish society. Analogous to empirical findings from elsewhere in the MENA region,[21] state involvement in civil society in Turkey renders elements of organized civil society as a force not for progressive, democratizing change but for upholding the state quo of state power. In addition to assertions that ‘state friendly’ CSOs in Turkey are helping to fashion a more conservative society in line with state ideology, respondents drew attention to the presence of state friendly CSOs in policy discussions and the negative impacts of this on democracy.

This finding concerns the second regressive societal role of CSOs identified by the research (see figure 1), namely that CSOs have provided outward legitimacy to state policy decisions that were designed deliberately to ensure the side-lining of democratic impact. Respondents from Kurdish, Kemalist, and feminist organizations reported that they had recently found themselves excluded from policy discussions, including those with the E.U., and replaced by organizations aligned with state interests. These organizations, which were taken to represent the views of women’s organizations more generally, then agreed to policy proposals put forward by the state. In doing so they provided a cloak of democratic legitimacy to these state policy decisions. This process and the consequences of it are described in the following extract:

Other similar examples were given by several interviewees, including one example from a meeting between the state, the E.U., and women’s organizations held only a few days prior to the interview at which the state was “showing the EU that they invited CSOs’ but almost all of those organizations were ‘AKP supporters.”[23]

These findings on the regressive societal roles of CSOs stand in stark contrast to the idealistic and normatively positive views which govern civil society policy and a significant element of the academic literature.[24]

What then can be said about the societal role of CSOs in Turkey based on the findings presented here? First, CSOs play both progressive and regressive roles in society. On the one hand, they are shown to advance and protect democracy and associated rights, while on the other hand they function to uphold and extend state power. Second, and related, is that the wider role of CSOs in society only partly adheres to the core views guiding policy (and elements of the academic debate) that CSOs operate impartially to protect society from state power and advance democratization, all of which is deemed to be broadly socially progressive. On balance, the findings present a more nuanced picture of CSOs and when taken together explicitly challenge the core assumption underlying civil society policy, namely that CSOs are inherently good for democracy and social progress.[25] In short, the policy view of CSOs and their societal role does not hold true on the ground in the Turkish case study.

Central to the explanation for this, and very much ignored by the policy perspective, is the impact of the state and state power on civil society. The results presented here from Turkey show how the state can intervene in civil society and use CSOs to support state interests and uphold state power. While the discussion here has centered on women’s organizations, the influence of state power is also evident in other sectors of Turkish civil society.[26] Moreover, the findings presented here are born out in other critical empirical studies of civil society in the MENA region, which likewise find the state central to shaping CSOs and their roles.[27] The influence of CSOs at a societal level undoubtedly renders them appealing to a variety of political interests and groups in society, and thus it is crucial that policymakers and scholars are aware of these different groups and their impact on civil society.

[9] This is due to their generally positive appraisal of the state and close relations with it.

[10] See Yeşim Arat,  “Religion, Politics and Gender Equality in Turkey: implications of a democratic paradox?”Third World Quarterly 31, no. 6 (2010): 869–884. This is evident in the government’s response to reproductive issues, for example, and in terms of social policies in the government’s efforts to curb the sale of alcohol.

[12] See “Abortion banned in Turkish state hospitals, health group claims,” Hurriyet Daily News, March 13, 2014, accessed December 7, 2014, http://www.hurriyetdailynews.com/abortion-banned-in-turkish-state-hospitals-health-group-claims-.aspx?pageID=238&nID=63512&NewsCatID=341; and Pinar Tremblay, “Turkish laws fail to protect women's right to choose,” Al Monitor, March 14, 2014, accessed September 9, 2014, http://www.al-monitor.com/pulse/originals/2014/03/turkish-womens-right-to-choose-law-fails.html. It is important to mention here that the government has since been accused of various strategies that have significantly limited access to, and thus the option of, abortion for many women.

[15] See Jessica Leigh Doyle, “Civil Society as Ideology in the Middle East: A Critical Perspective,” British Journal of Middle Eastern Studies (2016). A finding corroborated by an analysis of the wider distribution of state funding to CSOs in Turkey which shows the high level of funding distributed to Islamic organizations working on education programs.

[17] This was not done directly but through an intermediary.

[18] See Jessica Leigh Doyle, “Civil Society as Ideology in the Middle East: A Critical Perspective,” British Journal of Middle Eastern Studies, November 18, 2015, http://www.tandfonline.com/doi/full/10.1080/13530194.2015.1102713, accessed February 27, 2016; and Cihan Tuğal, Passive Revolution: Absorbing the Islamic Challenge to Capitalism (Stanford: Stanford University Press, 2009). It is worth noting here that close state-CSO relations of this kind are not unique to the AKP and Islamic organizations, and while Kemalist parties were in power the state had equally close relations with Kemalist CSOs. This suggests that although the ideology of the state may have changed in Turkey, the pattern of state-led civil society has not.

[24] For a review of this literature see Claire Mercer,  “NGOs, civil society and democratization: a critical review of the literature,” Progress in Development Studies 2, no. 1 (2002): 5-22.