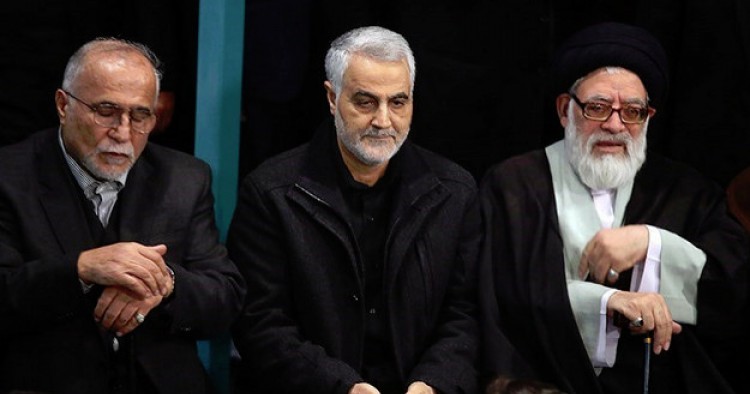 On Monday, the head of Iran’s Quds Force revealed that the country’s defense ministry worked over time in recent years to manufacture weapons to equip Iraq’s Army and the Hashd al-Shaabi – the Iraqi paramilitary forces also known as the Popular Mobilization Forces [P.M.F.] – in their fight against the Islamic State. “Supreme Leader [Ali Khamenei] asked the Islamic Republic to put all its resources at the disposal of the Iraqi armed forces without any hesitation,” Major General Qassem Soleimani said at an event in Tehran commemorating Iranian casualties in Iraq and Syria. He added that Tehran has provided “tons of weapons” to Iraq and deployed Sukhoi-25 fighter jets to provide close air support to the Iraqi ground forces upon a request by Iraqi Prime Minister Haider al-Abadi. He described this as evidence of Iran’s unconditional friendship with Iraq, alleging that Washington took Iraq’s money but did not deliver weapons to Baghdad when it needed.

The Quds Force commander credited Iraqi political, religious and military leaders for the latest victories against the Islamic State, particularly the P.M.F. and its commanders. “Abu Mahdi al-Muhandis is a living martyr. With 40 years of struggle, he has managed to control Iran’s weapons depots,” he said. Muhandis is the operational chief commander of the P.M.F. and he is designed as a global terrorist by the United States. “We take a pride in being the soldiers of Abu Mahdi,” Soleimani added.

The commander of the Quds Force, which is responsible for Iran's external military and intelligence affairs, also highlighted the Lebanese Hezbollah’s role in anti-Islamic State military operations in Iraq and Syria. “I must kiss the hands of Hassan Nasrallah,” he said in praise of the Hezbollah leader.

Comment: With the Islamic State on the brink of defeat in Iraq, Tehran is seeking to consolidate its military and political gains in its western neighbor. Recently, Iranian leaders have been pressuring the Baghdad government not to disband the P.M.F. once the fight against the Islamic State in Mosul and other key Iraqi regions is over. Last month, Khamenei praised the P.M.F. in a meeting with Iraqi Prime Minister Haider al-Abadi in Tehran, and urged the Iraqi leader not to listen to American advice on weakening or dissolving the force after the defeat of the Islamic State. “The Americans oppose the Popular Forces because they want Iraq to lose its main pillar of power,” Khamenei emphasized.

The P.M.F. consists of militia forces largely from Shiite but also other Iraqi ethnic and religious groups. While some P.M.F. units are Iraqi nationalists and follow Iraq’s top cleric Grand Ayatollah Ali Sistani, many prominent groups within P.M.F. have close ties with Soleimani. There is growing fear in the region as well as in Washington that Iran will seek to keep the P.M.F. as a long-term proxy in Iraq, the way it has nurtured and supported Hezbollah in Lebanon since the 1980s. Indeed, Soleimani in his Monday speech mentioned that the Iraqi army is "moving toward becoming a Hezbollah-like" army.