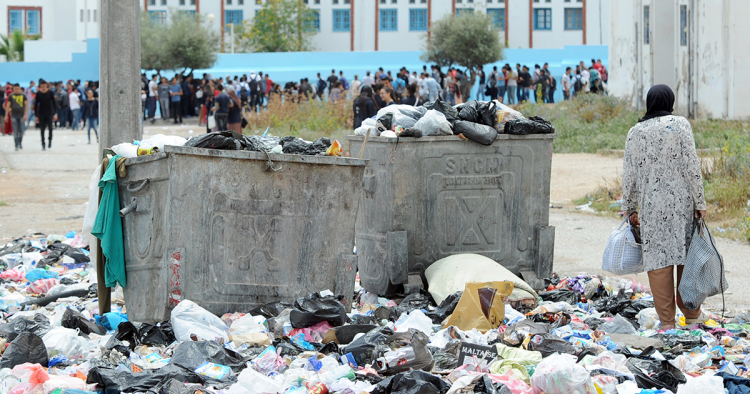 While the issue may be global in scope, the associated challenges are particularly acute in North Africa, and especially in Tunisia. Countries across the Maghreb face common hurdles in the form of high temperatures, under-development, limited waste collection infrastructure, and underinvestment in long-term, sustainable waste collection systems.

In the case of Tunisia, these problems are further exacerbated by local dynamics. The country is currently experiencing an unprecedented environmental crisis amid a weakening of state institutions and a broader economic meltdown. Increasing lawlessness and the growing power of corrupt lobbies have led to the proliferation of illegal dump sites for domestic and industrial waste.

These waste dumps not only pose environmental risks but also threaten Tunisia’s social peace. As they encroach on residential areas, turning neighborhoods into landfills, citizens have organized protests calling on the responsible authorities to take immediate action. There is growing pressure on the government to develop a waste management policy that protects residents’ right to live in a healthy environment, as spelled out in the 2014 constitution.

Too much waste with nowhere to go

Tunisia’s volume of waste increases by an average of 3% every day, adding up to more than 2.5 million tons each year. Many municipal landfills do not meet sanitary standards: Tunisia’s largest, Borj Chakir, the Tunis area’s only controlled dump, takes in an estimated 3,000 tons of solid waste per day — well over the 44 tons per day permitted in EU landfills.

In line with the broader trend toward decentralization in recent years, Tunisia’s municipalities assumed responsibility for handling local solid waste management in 2018. However, the politicization of municipal councils has created partisan disagreements, hampering decision-making. In addition, municipalities lack the resources and capabilities to effectively handle the growing volume of waste, and funding from the central government has often been insufficient. There are many entities that deal with waste, starting with the municipalities; they collect and transport household waste to collection centers, where the waste disposal agency transports it to controlled estuaries for treatment. The control structures in place are weak and there is a need for greater awareness of the importance of preserving health and protecting the environment from pollution.

The growing waste crisis has given rise to unrest and social tensions, such as in the governorate of Sfax in southern Tunisia. As a result of the closure of the nearby Agareb landfill, which triggered a crisis in the country’s controlled landfills, trash went uncollected; some 30,000 tons of waste piled up in Sfax’s streets. This case has highlighted the urgent need to address waste management and the broader environmental situation in Tunisia, considering its implications for both the climate and residents’ health.

According to one local activist in Sfax, Mariem Naifar, “The situation of garbage pollution becomes intense when plastic waste is found. This makes garbage very difficult for treatment.” Naifar said that the government isn’t taking serious action to reduce the amount of garbage in the streets. Although the government is collecting waste from some areas in Sfax, it continues to pile up in others.

Solving the waste buildup will be a societal effort

Although some European countries, mainly Italy, have tried to help Tunisia combat its waste crisis, the situation on the ground has become more prolonged, complicated, and alarming. Ironically, Tunisia’s former environment minister, Mustapha Aroui, was arrested in 2020 for allowing illegal waste shipments from Italy. Earlier this year, Tunisia and Italy signed an agreement to return the illegally imported waste. There is an urgent need to develop a national program that leverages local capabilities to tackle the problem of what to do with solid waste, rather than relying on external actors’ assistance.

An objective diagnosis of the problem is also needed as part of the broader effort to develop a suitable waste management strategy in Tunisia. It could be argued that the lack of a clear national strategy is the result of the rapid turnover of officials at the Ministry of the Environment, which has prevented sustained implementation. Such a strategy could be developed by redirecting the focus to the reduction of waste rather than its complete elimination. In addition, technical, economic, and social mechanisms need to be put in place to enable the success of a valuation option, whereby the pricing of waste can provide benefits to society. This could be enhanced if a number of municipalities collaborate to create a system of centers for sorting and valuing waste, which would help to reduce costs.

At present, only 4-7% of Tunisia's waste is recycled. The recycling sector is currently driven almost exclusively by informal waste collectors known as barbechas. They go through trash containers and landfills and remove recyclable items without having any official legal status to do so. A system should be developed that allows the barbechas to use their skills in collaboration with municipalities. The process of handling waste must be clearly organized, from collection to sorting and processing methods. This could include determining how many informal collectors there are, surveying them to understand their challenges, and developing a municipal program to incorporate them as critical supporters in waste management. This scheme would provide a regular source of income for the barbechas and a means to formally include them in society.

By adopting a public-private partnership approach to service provision, many investors could directly value the sorted waste, such as plastic, paper, metal, and other materials, creating jobs and stimulating the economy. This could also help facilitate acquisitions that the state is not able to afford at present. There are other potential upsides as well, including the use of waste as an energy source.

At the same time, civic organizations will need to play a central role in raising awareness about this issue, helping to educate citizens about how they can reduce waste through changes to their behavior and consumption. Educational programs are necessary as well to implement waste management curricula in schools and identify research gaps in higher education. This would allow young researchers to contribute to developing the waste management sector by advancing technologies and recommending policies.

Tunisia will need to adopt a collective approach to waste management, whereby both municipalities and civil society ensure the implementation of a broader national strategy. It should make room for and incentivize community-level entrepreneurial projects to work on this issue through local recycling companies and initiatives. This could help foster social contributions and create jobs without the need for international aid. In addition, such an approach could also give rise to opportunities for companies in Europe or neighboring states, such as Libya and Algeria, to pursue mutually beneficial cooperation in North Africa.

Malak Altaeb is a non-resident scholar with MEI’s Climate and Water Program and an independent consultant, writer, and researcher based in Paris, France. The views expressed in this piece are her own.