The stakes are high in Istanbul’s election rerun 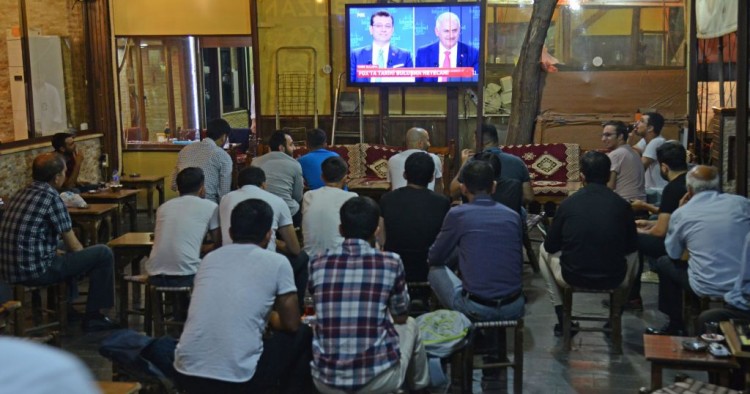 Istanbulites are only few days away from delivering their verdict on who will run the city for the next five years. The June 23rd election marks the second time in three months that local voters will choose their mayor. In March, millions of Istanbulites went to the polls and the opposition’s candidate, Ekrem Imamoglu, defeated Binali Yildirim of the ruling coalition by a razor-thin margin. Imamoglu served as mayor for 18 days before the country’s Supreme Electoral Board gave in to pressure from President Recep Tayyip Erdogan, nullified the vote, and ordered a rerun.

Now all eyes are on Sunday’s election. If Binali Yildirim wins, voters’ faith in the electoral process will suffer another blow. Those who have been arguing that a peaceful transfer of power after an electoral defeat was no longer possible will be proven right. An opposition win, by contrast, will have much broader consequences. It will not only provide a golden opportunity for Imamoglu and the main opposition Republican People’s Party (CHP) to build a track record of successful governance and connect with religious voters, it could also lead to a crack in the ruling Justice and Development Party’s (AKP) alliance with the ultranationalists. In short, the stakes are high for everyone.

President Erdogan is working hard not to lose the city that made him a national figure a second time. To that end he has changed the party’s election strategy. In the run-up to March, he framed the elections as a matter of “survival” for Turkey. He built the campaign around the issues of terrorism and the Kurds. He promised to once again appoint government administrators for Kurdish-majority towns if the new mayors, like their predecessors, are deemed to have ties to Kurdish militants; told those who wanted Kurdistan to go to northern Iraq; and accused the opposition alliance of cooperating with “terrorists.” He personally led the campaign, holding up to eight rallies a day across the country, while the candidates took a back seat. He ignored public opinion polls that showed the majority of Turkish citizens were far more worried about rising prices and unemployment. Little was said about the country’s growing economic problems or local issues like infrastructure. The election results suggest that strategy failed.

The ruling party lost almost all of Turkey’s major cities, including Ankara, the capital, and Istanbul, the country’s economic powerhouse. In Istanbul, a city of 16 million, hundreds of thousands of disgruntled AKP supporters, including Kurds who voted for the AKP in the past, sat out the race. This time around, Erdogan’s strategy is to focus on mobilizing those who didn’t go to the polls last time around. He gave up on the “our survival is at stake” narrative, drew back from the campaign, and let Yildirim take center stage. Unlike a few months ago, Yildirim is everywhere now, mingling with people on the streets and talking about his projects to address Istanbulites’ pressing problems. The messaging is a lot less aggressive.

The biggest volte-face in the campaign narrative concerns the Kurds, however. Home to more than 3 million Kurds, Istanbul is the largest Kurdish city in Turkey. The voters of the pro-Kurdish Peoples’ Democratic Party (HDP) account for around 10 percent of the electorate in Istanbul and a majority of them supported Imamoglu in March while Kurds who traditionally voted for the ruling party stayed home. The AKP is now courting the Kurdish vote to get them to the polls this Sunday. Abdullah Ocalan, the imprisoned leader of the outlawed Kurdistan Workers’ Party (PKK), was allowed to meet with his lawyers for the first time in eight years. Yildirim paid a visit to Diyarbakir, considered to be the spiritual capital of the country’s Kurdish minority, where he spoke Kurdish and referred to the city as Kurdistan — actions that have landed many in jail in the past. Influential Kurdish families have been brought to Istanbul while AKP officials go door-to-door to convince Kurdish voters to support Yildirim. On June 10th Turkey’s foreign minister, Mevlut Cavusoglu, attended the swearing-in of Nechirvan Barzani as the new president-elect of Iraq’s Kurdish region in Erbil. Even Erdogan’s ultranationalist ally Devlet Bahceli, head of the Nationalist Action Party (MHP), changed his tone, calling Kurds and Turks brothers.

But Kurds are unlikely to be swayed by the ruling party’s last-minute efforts at a time when the AKP is seen as more anti-Kurdish than ever. The party is in an alliance with the ultranationalist MHP, which dims hopes for a resumption of peace talks with the Kurds for the foreseeable future. The HDP’s former co-chair, Selahattin Demirtas, remains in jail on terrorism charges. The Turkish military is pounding PKK targets in northern Iraq. Turkey has threatened to carry out a military operation against the Kurdish People’s Protection Units (YPG) east of the Euphrates River in Syria. And just recently, AKP mayors removed Kurdish-language signs in Turkey’s Kurdish provinces.

The opposition candidate Imamoglu’s prospects for mobilizing disgruntled Kurdish voters are better. The Supreme Electoral Board’s decision to nullify the March vote seems all too familiar to them, as the mayors of Kurdish-majority cities in the southeast have been stripped of their mandates over alleged links to terrorism and replaced with state-appointed trustees. The board’s decision and Imamoglu’s moderate stance vis-à-vis the Kurds are likely to mobilize the more than 100,000 HDP voters who stayed home in March to vote for the opposition’s candidate. In a race that was won by a little over 13,000 votes last time around, these Kurdish voters might tip the balance toward Imamoglu.

The ruling coalition’s candidate faces further challenges as well. It is unclear whether Yildirim can convince disgruntled AKP voters, who are frustrated over the country’s economic woes, Istanbul’s growing problems, as well as increasing authoritarianism. He has promised to address some of these concerns, but the fact that the city has been run by his party for the last 25 years makes the task of persuading voters difficult.

Despite what might look like a gloomy picture for the Yildirim campaign, there are those who think that Erdogan would have never called for a rerun of the election without making sure he would win — one way or another. Will Erdogan pull a trick out of his hat? He might, but not without a huge cost for his already damaged image and the country’s faltering economy.