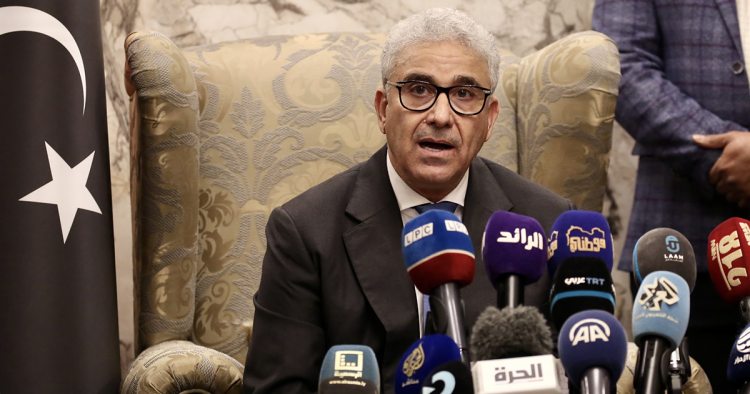 With the election on Feb. 10, 2022 by the Libyan House of Representatives (HoR) of Misratan Fathi Bashagha as its choice to become the country’s new prime minister, Libya has entered a new, third round of two governments contesting each other’s legitimacy.

A review of Bashagha’s background provides a window into how Libya has arrived there.

Bashagha is a well-known figure within Libya and to international actors involved in the country. Having served as a pilot in the Libyan Air Force under Moammar Gadhafi, Bashagha was elected from Misrata to the new Libyan HoR in June 2014, the last time national elections were held. Bashagha boycotted the HoR when its new speaker, Aguila Saleh Issa, moved it from Tripoli to Tobruk in the east, Saleh’s base, with the result that Libya had its first round of two competing governments — the western one in Tripoli representing the outgoing General National Congress (GNC) and the eastern one supported by Saleh and a rump HoR in the city of Baida.

During 2014 and 2015, Bashagha actively participated in the U.N.-sponsored peace process that led to the Libyan Political Agreement (LPA) establishing the Tripoli-based GNA, agreed in Skhirat on Dec. 17, 2015, which was supposed to end the period of dueling (and dual) governments. He became its interior minister, and effectively organized, with the support of Turkey, the coalition of forces that resisted and defeated Libyan warlord Khalifa Hifter’s effort in 2019 and 2020 to conquer Tripoli by force and bring the country under his personal rule.

In the wake of Hifter’s failed military offensive and the end of the foreign-backed civil war, Bashagha fell out with then-Libyan Prime Minister Fayez al-Sarraj, and retired from the GNA. He then promptly broke bread with his former military enemy, Hifter, and with Saleh, who from 2015 through 2021 steadily resisted and thwarted the GNA and then-PM al-Sarraj from functioning as a government, establishing a second period of competing and parallel institutions in Libya’s eastern coastal region.

By March 2021, with an unpopular GNA and al-Sarraj running out of gas, and Libya’s east facing a cash crunch after a Maltese seizure of inbound Russian fake dinars and the insolvency of many of the region’s banks, Bashagha cut a deal with Saleh. Under their agreement, the two men would run as a tandem to become prime minister and president, respectively, in a successor transitional government brokered by the U.N. and its then-acting special envoy, Stephanie Williams, the Government of National Unity (GNU), which was to have held power only until the conclusion of national elections scheduled for Dec. 24, 2021.

But instead of Bashagha delivering enough votes from Tripolitania in the west and Saleh delivering enough from Cyrenaica in the east among the 75 members of the Libyan Political Dialogue Forum selected by the U.N. to vote on the heads of the new GNU, another Misratan, reported billionaire Abdul Hamid Dbeibah, eked out a victory — said to be secured through carefully placed bribes — and became the GNU’s prime minister. After several sources confirmed the bribes, the U.N. undertook an investigation and made the decision to keep its findings secret.

Despite the pall cast on Dbeibah’s legitimacy, as the first Libyan leader in seven years not to have a competing government in the east to contend with, and freed of any immediate threat of civil conflict, Dbeibah used the remainder of 2021 to freely, and adroitly, distribute largesse from Libya’s oil revenues for popular new infrastructure projects. Dbeibah then broke the commitment he’d been required to make to become prime minister that he would not become a candidate in the scheduled Dec. 24 elections, and was well-positioned to come out as the leading candidate following any first round.

This was not the way things were supposed to turn out for Saleh, who has skillfully used his position as speaker to ensure that any Libyan process or institution he did not control would fail. In August 2021, Saleh engineered a vote of no confidence by the HoR in the Dbeibah government, and a month later, the HoR held a further no confidence vote and declared the Dbeibah government as authorized to function solely as a temporary caretaker pending elections. Saleh then announced his candidacy for president of Libya in the pending December elections.

When the December elections did not take place, in large part because Saleh had designed them to fail by separating them into multiple phases to enhance his ability to control the results, a further move by Saleh to succeed in his quest to become president with a hand-picked PM was inevitable.

Thus, the reappearance of Bashagha as the HoR’s choice for prime minister represents a resurrection, one year later, of what Saleh had sought all along — a prime minister who both depended on Saleh and his constituencies in the east, and yet who had his own foundation of support in the west, including with key militias.

On the day of Bashagha’s selection, Dbeibah survived an assassination attempt (Bashagha had himself survived such an attempt last year) and immediately thereafter, announced his intention to continue to serve as prime minister, and expressed his support for Libyan elections to take place as soon as possible.

The uncertainty of whether Libya will now have one government (and if so, which one), or two (and if so, headquartered where), and whether political settlements will be reached peacefully, or through force, have left foreign governments, many already preoccupied by the risk of a Russian invasion of Ukraine, largely silent, with the exception of Egypt, which has endorsed Bashagha, despite his long and close association with Turkey. So far, the United Nations, through both Secretary-General António Guterres and his Libya advisor, Williams, has largely limited itself to calling on all sides to maintain stability and to support early elections. Williams’ ability to bring those about has been sharply curtailed by Russia’s refusal to authorize the U.N. Support Mission in Libya beyond April 30, potentially making Williams a short-timer, unless Guterres is able to work out a deal with Russia.

While it would be better to have the Libyan people empowered to make these decision for themselves, the ability of Bashagha, Hifter, and Saleh to form a new coalition remains a striking development in Libyan history, suggesting the possibility that people with vastly different foundations for support could — perhaps — find ways of sharing power and funds in a fashion that could bring about stability. The possibility of success would be enhanced if Bashagha were ultimately able to bring enough of the military forces, including Tripoli’s militias, to back him, as they did during their defense of Tripoli against Hifter.

Similarly, the ability of Debeibah to use Libya’s wealth to secure the support of a range of constituencies behind him is in some sense a positive development. Using Libya’s vast oil wealth to buy people off as a means of remaining in power was one of Gadhafi’s most important skills. If Debeibah remains in power, it will largely reflect his ability to secure support within Libya, rather than dependence on any foreign actor.

An important factor in determining what will happen is the other Libyan governance body, the High Council of State (HCS) in Tripoli, formed as a consultative body to replace the old GNC by the 2015 LPA. Support for the Bashagha government from the GNC, as the other half of Libya’s legislative branch, independent of Saleh and frequently in opposition to his actions, would substantially increase the perceived legitimacy of the HoR’s action, and likely facilitate Bashagha’s ability to secure further support from a variety of political actors and from security groupings on the ground in Tripoli.

So far, the head of the HCS, Khaled al-Mishri, has not taken a clear position on the Bashagha appointment. Initially, he was reported as supporting it, before then saying (accurately) that the HCS had no formal authority to approve or disapprove appointments, as its only role is consultative, but also saying that consultations remained underway. Al-Mishri’s caution in taking a position is understandable, given reports that a convoy of militia forces from Misrata were on their way to Tripoli to provide further armed support for keeping Debeibah in place.

Absent elections, the legitimacy of any Libyan government remains justifiably contested. The good news in the ongoing drama is that Libyans, rather than internationals, are now taking the lead in determining who will govern Libya. The bad news is that the current turmoil risks a renewal of armed conflict in Tripoli, pending a resolution of the political, security, and financial competition of yet one more period of dueling Libyan governments competing for the mantle of legitimacy.

Jonathan M. Winer, non-resident scholar at the Middle East Institute, was the U.S. Special Envoy and Special Coordinator for Libya from 2014-16. The views expressed in this piece are his own.