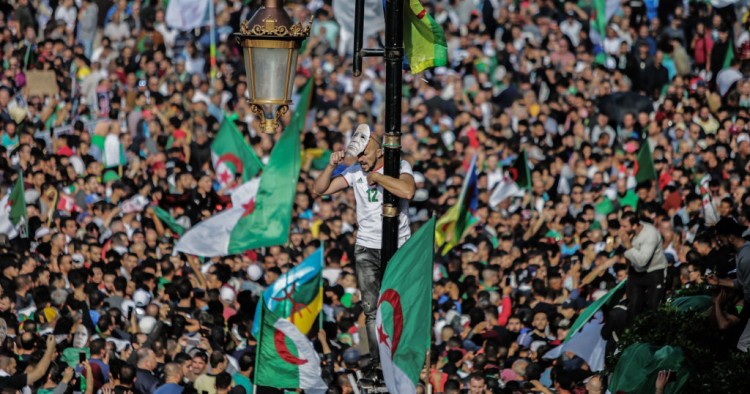 In February 2019, following then-President Abdelaziz Bouteflika's announcement of his intention to run for a fifth consecutive term, Algeria saw a mass protest movement erupt across the country. Millions of citizens took to the streets to demand that the president rescind his candidacy, ultimately driving Bouteflika to step down in April 2019 after two decades in office. Despite the president’s resignation, the protest movement (known in Arabic as the Hirak) continued to hold demonstrations for months thereafter — only halting in March 2020 due to the COVID-19 pandemic — with protesters' demands expanding to encompass broad-based democratic reform.

Meanwhile, in October 2019, roughly a million demonstrators across Lebanon, constituting nearly a quarter of the country’s population, converged en masse in the streets to rally against their government. Like in Algeria, these protests initially began in response to a particular trigger — in Lebanon’s case, a planned government tax on voice over internet protocol (VoIP) calls — but continued even after the government reversed course on the tax and Prime Minister Saad Hariri tendered his resignation. Lebanese protesters are now focusing on comprehensive political change and are calling for the end of the country’s long-standing sectarian power-sharing arrangement.

While the countries’ protest movements have achieved significant victories, Algeria and Lebanon’s underlying governance structures — and the ruling class that benefits from their retention — have remained fundamentally intact, and protesters’ goals of meaningful, democratic reform remain elusive. Algeria’s December 2019 presidential elections, which featured a set of “approved candidates,” resulted in the victory of Abdelmadjid Tebboune, a long-time regime insider who previously served as prime minister under Bouteflika. Although Tebboune has embarked on a transitional reform process since taking office, opposition groups and legal experts have criticized his administration’s proposed changes as cosmetic. And similarly, while Lebanon formed a new “technocratic” government following the dissolution of Hariri’s cabinet, many of the new government members are affiliated with the country’s powerful political parties and business leaders.

As Lebanese protesters look to advance the systemic reforms they seek and contend with an entrenched ruling elite with little incentive to change, they can draw on their Algerian peers’ successes and shortcomings.

Algeria’s shortcomings: Lack of leadership or a clear roadmap for reform

The path forward for Lebanon

As it currently stands, in the absence of a compelling reform narrative or realistic, clearly-articulated plan from the Hirak, the Tebboune-fronted version of Algeria’s pouvoir is creating a new normal while changing very little of the power structure the Hirak railed against. Nevertheless, both the successes and shortcomings of Algeria’s Hirak present several takeaways for Lebanese protesters to better position themselves to drive long-term political change.

First, maintaining nonviolence and remaining above the partisan and sectarian fray are necessary for gaining mainstream support and building movement legitimacy. Lebanese protesters would do well to mirror their Algerian counterparts by continuing to resist singling out any particular political or ethnic group and remaining inclusive and peaceful. Second, protesters must work to establish clear goals and strategies for their movement to avoid growing obsolete or falling prey to infighting while the regime advances its own cosmetic reforms. Lebanese activists should work to outline coherent, detailed, and realistic roadmaps for reform. Finally, protest movements without leadership structures and practical roadmaps for reform can be successful in bringing about short-term changes. But to dislodge a firmly embedded ruling elite and force the government to go beyond offering a symbolic sacrifice and moving on, activists must select a group of representatives who can maintain movement discipline and unify protesters under a clear and realistic agenda for change — otherwise, they risk losing relevance and momentum as the regime further entrenches the status quo.

Mahpari Sotoudeh is a senior program officer for the Middle East and North Africa at the National Democratic Institute. The views expressed in this piece are her own.