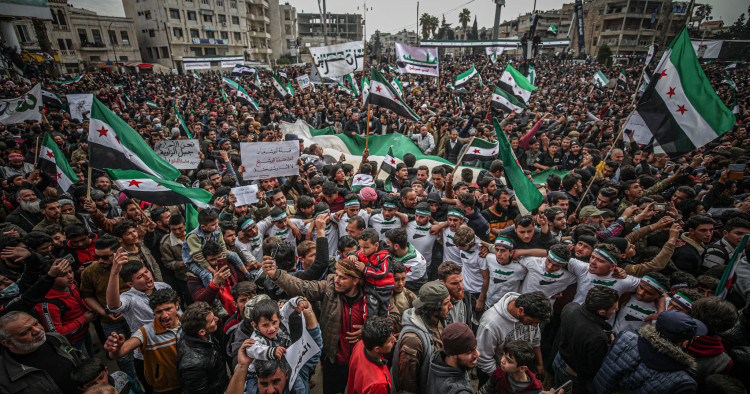 In early April, the U.S. director of national intelligence released an unclassified report detailing global threats to the national security of the United States. The report noted that while Syrian President Bashar al-Assad continues to control the core of Syria, he will struggle to reestablish control over the entire country and will boycott ongoing negotiations with the West, particularly with backing from Russia and Iran.

Assad’s current geopolitical challenges present the U.S. with an important opportunity to address a growing national security threat. By taking steps today to ensure that areas currently outside of Assad’s control remain protected from both the Syrian regime and other external actors seeking to further destabilize the country amid the chaos, the U.S can protect itself and the West from an uncertain tomorrow and stand up for Syrian refugees in the process.

Specifically, the U.S. support can and should be driven by financial aid and assistance that allows displaced Syrians to return safely to their homes and restart their lives. To accomplish this, engagement with Syrian communities must be pursued at the community level in areas of the country that are relatively secure. U.S. diplomacy is critical for this to work.

The voices of protesters in Syria who are seeking freedom of speech, self-governance, and national dignity have persisted for over a decade. They believe in a Syria that can provide an education, a job, basic quality health care, and freedom of expression. This was evident during the recent demonstrations in places like Dera’a and Idlib, despite the bloodiest crackdown in modern history by the Assad regime against the protesters.

I lived in Syria for two-thirds of my life and immigrated to the United States after graduating from Damascus University. On occasions when I have returned to Syria (now as a Syrian American) and met with many local leaders as well as young activists and professionals, I was struck by the unstoppable determination of the youth who have lived so much of their young lives surrounded by war and conflict. Despite the obstacles that they face, they remain determined to live the kind of life that we often take for granted in America.

A long-lasting and effective strategy in Syria must make empowering engagement with Syrian youths a fundamental matter of U.S. foreign policy. How do we get there?

In the northeast region, Kurdish-led forces helped defeat ISIS with the support of the counter-ISIS coalition led by the U.S. and an American military footprint. The stabilization that followed helped Syrians develop their own sociopolitical infrastructure in that region, which has led to a burgeoning system of self-governance. While it is still a work in progress, particularly with regards to true inclusiveness to major and minor ethnic groups in that region, it is a start nonetheless, and it certainly presents a leverage mechanism for effective U.S. diplomacy in Syria, and potentially a model for other parts of Syria that the U.S. can help replicate.

The northwest region of Syria, by contrast, has only recently achieved an acceptable level of security and stability. The Assad’s regime and its supporters have overwhelmed it by military force against civilians, and only following Turkey’s military intervention had there been some level of a military counterbalance. The humanitarian consequences have been predictable but no less horrifying. The refugee crisis remains an ongoing international concern. Furthermore, an agreed-to cease-fire has proven time and again to be fragile, with recent violations by Russian air forces against Atareb hospital and several humanitarian trucks. U.S. diplomacy is critical to strengthening the cease-fire and stabilizing the local communities that have divorced themselves from extremism in the northwest region.

The southeast and southwest regions of Syria, meanwhile, are not nearly as stable due to the ongoing, aggressive actions against local civil communities of the Assad regime in partnership with Iranian militias and residual pockets of ISIS. While the U.S. military outpost at Tanf, in southern Syria, cannot on its own keep that region of the country stable in the long run, it can serve as a security tripwire and help leverage U.S. diplomacy in favor of local communities that require technical assistance and capacity-building in the short and medium terms.

Stability in Syria can be achieved if the United States works with local coalitions and partners on the ground, who would welcome American support. Using stabilization funding for governance initiatives and civil services in the three above regions would be one concrete way to get Syrian citizens — especially young Syrians — back on their feet. Harnessing their hope, determination, and perseverance will ultimately be the key to defeating Assad in Syria.

Dr. Muhammad Bakr Ghbeis is the president of Citizens for a Secure and Safe America, a 501c4 organization whose mission is to promote a democratic change in Syria so that its citizens can live in a free, secular, and prosperous country. The views expressed in this piece are his own.