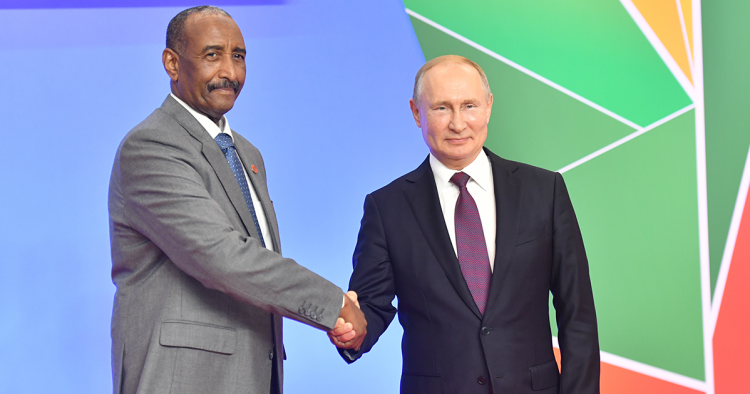 Russia’s foreign policy in areas of the Arab world and Africa where the Soviets once wielded significant influence decades ago has become increasingly assertive in recent years. One such area is Sudan, a pro-Soviet country from 1969, when Gaafar Nimeiri took power, until the communist-backed coup of 1971.

Sudan’s strategic importance to Russia stems from its geographic location along the Red Sea. This body of water, which links the Mediterranean to Asia, is one of the world’s busiest waterways. The Soviets once had a military footprint along the Red Sea in Ethiopia, Somalia, and South Yemen, and re-establishing a presence in the region is critical to Russia’s projection of naval power and access to the Indian Ocean. With a naval facility in Syria and talk of more bases in Libya, a foothold in Sudan provides Moscow posts in both the Mediterranean and Red Sea — an important step in Russia’s efforts to become a global naval power.

Throughout the 21st century, and especially since 2017, Russia has markedly strengthened its relationship with Sudan under both President Omar Hassan al-Bashir’s regime and the current transitional government. Today, Sudan is one of Russia’s largest weapons markets in Africa, and bilateral trade reached $500 million in 2018, making Sudan Russia’s third-largest sub-Saharan trade partner.

Yet Sudan is also weighing new opportunities to deepen relations with the West following its removal from the U.S. State Department’s list of State Sponsors of Terrorism in late 2020. The northeastern African country is balancing itself geopolitically between Russia and the U.S. at a time when Moscow and Washington’s competition for influence in the Red Sea could put significantly more pressure on Khartoum.

Russia’s past with Bashir

During the 2000s and 2010s, the International Criminal Court (ICC) indicted and pursued Bashir, and Sudan, hard hit by sanctions, grew increasingly isolated as a global pariah. The Khartoum regime placed greater value on its relationship with Russia as a result, and Moscow’s support bolstered Russian narratives about its respect for Arab and African countries’ sovereign rights. Across the Global South, Russia presents itself as a bulwark against Western interventionism in Arab and African countries’ internal affairs, refusing to lecture autocrats about human rights.

Even though he was wanted by the ICC on charges of war crimes, crimes against humanity, and genocide, Bashir visited the Russian Black Sea coastal city of Sochi on Nov. 23, 2017, traveling on a plane that Russian President Vladimir Putin sent to Khartoum. Mindful of Russia’s intervention in Syria in support of the government of Bashar al-Assad in late 2015, Bashir came to Putin asking for help facing perceived internal and external threats that his regime saw as increasingly existential. These threats included festering conflicts in the country’s peripheral regions and anti-government demonstrations in Sudanese cities, as well as U.S.-imposed sanctions. While in Sochi, Bashir also expressed an interest in buying Russia’s S-300 air defense system.

Bashir’s trip to the Black Sea city came 13 months before he visited Assad in Damascus — a sign that Sudan was becoming more supportive of Russia’s regional agenda, which entailed pushing Arab states to re-normalize full-fledged relations with Syria’s government. In Sochi, Bashir expressed support for Russian military operations in Syria and Moscow’s positions on other contentious issues in the Middle East. Bashir played the anti-U.S. card to appeal to Russia’s leadership. “We are primarily opposed to U.S. interference in the domestic affairs of Arab countries, in particular U.S. interference in Iraq,” he told Putin.

The timing of Bashir’s visit to Sochi was tied to his desire to exploit the U.S.-Russia rivalry to his own advantage. When Bashir went to Russia, Khartoum had reason to expect that the Trump administration was on the verge of softening Washington’s position against the Sudanese regime. The former U.S. president’s perceived fondness for dictators, as well as Sudan’s alignment with Gulf Cooperation Council (GCC) states against Iran in 2016, supported Khartoum’s expectations. This was especially true in light of the talk coming out of the 2017 Sochi meeting about Russia establishing a naval post along Sudan’s Red Sea coast — a development that would inevitably alarm Washington and possibly lead to the U.S. reaching out to Khartoum to start a new chapter in bilateral relations.

In 2018 and 2019, Sudanese citizens took to the streets, demanding democratic reforms and calling on Bashir to step down. Russia came to the defense of Sudan’s strongman, with the Kremlin-linked Wagner Group, a Russian private military company, working with Sudanese security forces to suppress protesters. Russian specialists also planned a misinformation campaign for Bashir’s government to launch, an effort that if implemented would have weaponized fake news against the demonstrators, depicting them as pro-Israel, pro-LGBTQ, anti-Islam, and linked to foreign actors.

Since the Sudanese military deposed Bashir in April 2019, Russia has had to contend with new political realities and Moscow has worked hard to maintain good bilateral relations with Khartoum regardless of which institutions and figures are at the helm. Going forward, Russia may face lingering opposition among those in the civilian component of the government in Khartoum who backed the revolution and perceived Moscow’s support for Bashir as counterrevolutionary.

In December 2020, Khartoum and Moscow signed a military-technical cooperation agreement to establish a Russian naval logistics base in Port Sudan on the Red Sea coast. This naval post is Russia’s first in Africa and the second outside of the former Soviet Union. The 25-year deal, which intends to “uphold peace and stability in the region,” permits the Russians to dock four ships and a maximum of 300 personnel at the port and gives Russia a “window on Africa.” The agreement provides Russia the freedom to use Sudanese airports to transport “weapons, ammunition, and equipment” necessary for supporting the base.

Russian energy interests are key to this picture. “[T]he base will help Moscow establish some measure of control over the flow of oil that passes through the northeast Africa region,” explained the political analyst Nikola Mikovic in a December 2020 op-ed. This is not without its challenges, however, according to Mikovic: “Most of the oilfields in the region are in South Sudan, but oil exports are almost entirely dependent on the Republic of Sudan. If Russia aims indeed to control oil flows in this region, it needs to own the strategically important Port Sudan oil terminal.”

In April Al Arabiya and various other media sources reported that Khartoum had canceled the agreement under pressure from the Biden administration. But Samuel Ramani of Oxford University believes such claims are unsubstantiated. The news “has been denied from the Russian side and Sudanese media showed a Russian warship arriving around May 1, so [Russia’s port in Sudan] appears to be active,” he told MEI. Sudan’s government did not comment on such claims, and there has been no follow up in the weeks after these reports. For now, it seems likely that the Russians will maintain their naval logistics base in Sudan.

Khartoum is seeking to maintain a balanced foreign policy between Washington and Moscow, but this will depend on the current governance landscape in Sudan, which rests on a power-sharing agreement between the military’s leadership and the civilian component. The former is keen to move closer to Russia while the latter is “much more inclined to full-heartedly embrace the United States,” according to Ramani.

As Joe Biden and many in his party argue that Donald Trump spent four years “rolling over” to Putin, the current administration seeks to distinguish its foreign policy vis-à-vis Russia from the previous one. At the same time, the White House is attempting to lure Khartoum closer to Washington while capitalizing on the new dynamics in U.S.-Sudan relations that resulted from the lifting of the terrorism designation last year. These two facts suggest that Biden’s team sees Sudan as a battleground in the larger struggle against Moscow’s geopolitical ascendancy. What remains uncertain is how much success the U.S. will have convincing post-revolutionary Sudan to scale back its partnership with Russia.

Giorgio Cafiero is the CEO and founder of Gulf State Analytics, a geopolitical risk consultancy based in Washington, DC. His research interests include geopolitical and security trends in the Arabian Peninsula and the broader Middle East. The views expressed in this piece are his own.