Sudan-Russia relations after the October coup: The view from Moscow 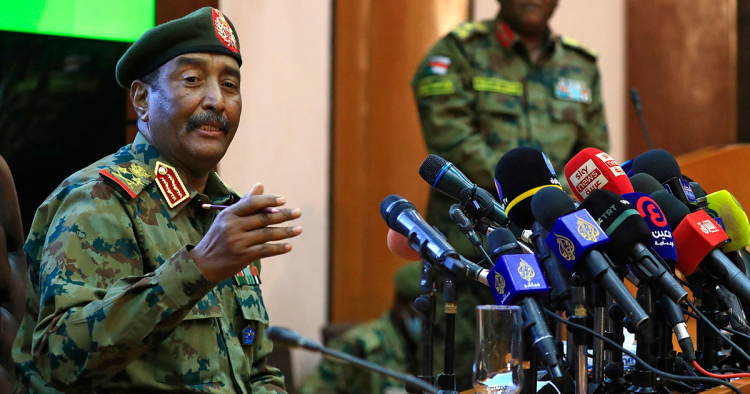 Since late October, Sudan has been mired in a state of intense political turmoil. On Oct. 25, Gen. Abdel Fattah al-Burhan seized power in a coup d’état, placed civilian Prime Minister Abdalla Hamdok under house arrest, and declared a state of emergency. In response to intense international pressure, Burhan and Hamdok signed a 14-point deal on Nov. 21, which reinstated Hamdok as prime minister and resulted in the release of political prisoners. While this agreement thwarted Sudan’s descent into a military dictatorship, mass protests persist and the opposition Forces of Freedom and Change (FFC) have rejected the deal.

While the United States and European Union immediately condemned the Sudanese coup, Russia’s response to Burhan’s takeover and Hamdok’s eventual return to power was more ambiguous. Russia’s Deputy Representative to the United Nations Dmitry Polyansky stated that it was “hard to say whether it’s a coup or not” and claimed that events like those in Sudan happen elsewhere in the world without being called a coup. Russian Foreign Minister Sergey Lavrov attributed Sudan’s state of instability to destabilizing actions by Western powers, which resulted in the erosion of the country’s territorial integrity and enforced democratization.

Russia’s refusal to condemn the coup plotters underscored its potential to benefit geopolitically from shifting political winds in Sudan. Russia views potential frictions between Sudan and Western countries, which emanated from the coup, as a boost to its prospects of constructing a naval base in Port Sudan and to its defense partnership with Khartoum. Russia’s interests in Sudan would likely be maximized by a partial transition to civilian rule, which is illiberal in character and affords considerable influence to the Sudanese military.

The implications of the coup on the Russia-Sudan security partnership

Although Burhan maintains cordial relations with Russian officials, the prevailing view in Moscow was that the coup was deleterious for the Russia-Sudan security partnership. Col.-Gen. Leonid Ivashov, who previously served as the head of the Russian Defense Ministry’s main department of international military cooperation, expressed concern that the coup was instigated by the United States and feared that it would cause Russia’s Port Sudan base to be forgotten. In November 2020, Russia announced plans to construct a naval base on Sudan’s Red Sea coast, which would act as a logistical supply center and a resting place for crew members. This facility would alleviate pressure on Russia’s naval base in Tartous on Syria’s Mediterranean coast and allow Russia to play a greater role in anti-piracy missions in the Indian Ocean.

The influential role of Deputy Chairman of the Transitional Sovereignty Council Mohammed Hamdan Dagalo, also known as Hemedti, was greeted with uncertainty. Sergei Seregichev, a Sudan specialist at the Russian State University for the Humanities, told me, “Sudan’s revision of the agreement on the Russian military base worsens the image of Hemedti as a reliable partner of Russia.”

These concerns were assuaged by Burhan’s rhetoric on the Port Sudan naval base. In a Nov. 1 interview with Sputnik, Burhan emphasized Sudan’s commitment to the Port Sudan base agreement but conceded that “there are still some faults that have to be remedied.” One area still under negotiation is the base’s location, as Russia wishes to construct the facility on Suakin Peninsula and Sudan wants it to be built in the less strategically valuable site of Arkiyae. Nevertheless, Burhan’s statement was considerably more optimistic than Armed Forces Chief of Staff Gen. Mohamed Othman al-Hussein’s comments in June, which decried “somewhat harmful” clauses in the agreement and called for its outright suspension.

While the return of a power-sharing agreement in Sudan could once again undermine the basing agreement, Russia is quietly taking steps toward finalizing a set of terms that could result in the Port Sudan facility’s eventual construction. According to report in Nezavisimaya Gazeta, Russia has reportedly offered Sudan complimentary arms shipments and information about the hydrometeorological situation in the Red Sea and has agreed to construct a pier for Sudanese warships. While these offerings fall short of Sudan’s initial requests, which reportedly included S-400 anti-aircraft missile systems, Su-30 and Su-35 jets, and a 1,200-MW nuclear power plant on the Nile River, they could induce Khartoum to accept Russia’s base proposal.

Due to Sudan’s frictions with Ethiopia over the al-Fashaga border and the Grand Ethiopian Renaissance Dam (GERD), and amid growing concerns about internal upheaval in Ethiopia, Russia is trying to upgrade its defense cooperation with Khartoum. In the immediate aftermath of the coup, the Russian Ministry of Defense’s International Cooperation Directorate held talks with Gen. Hussein on security cooperation. This cooperation is likely to continue, as Sudan’s political future remains in flux and the Tigray War plunges Ethiopia into a spiral of instability.

Much like Saudi Arabia, the United Arab Emirates (the UAE), and Egypt, Russia has been a consistent supporter of authoritarian stability in Sudan. Prior to President Omar al-Bashir’s ouster from power in April 2019, Russia deployed Wagner Group private military contractors (PMCs) to guard mining assets in the country and forestall his overthrow. Although the Russian Foreign Ministry effusively praised Sudan’s democratic transition in August 2019, doubts lingered in Moscow about the stability of a pluralist Sudan. The precedent of Sudan’s aborted 1985-89 democratic transition, which ended with Bashir’s coup d’état, has been cited by Russian media outlets as proof of liberal democracy’s unsuitability in Sudan. During the buildup and aftermath of the Sudan coup, RT’s media coverage highlighted Sudanese public support for a military coup, castigated the civilian government’s role in exacerbating food shortages, and claimed that Hamdok presided over an “unelected technocratic administration.”

Although Russia’s autocracy promotion efforts are well-documented, it also finds the re-establishment of a military dictatorship problematic. During the coup, Russian state media outlets promoted the narrative that Western countries would accommodate rather than isolate a military regime in Sudan. An Oct. 24 RT article noted that “the U.S. needs to keep the country’s military strongmen on board if Sudan is to follow Washington’s course to cut out Russia and China.” This closely mirrored initial concerns in Russian media outlets about Egypt’s path under President Abdel-Fattah el-Sisi in 2013, which were only assuaged by his subsequent outreach to Russia. An Oct. 25 RT article warned that the re-institution of a military regime could place Sudan on a path to “further chaos.” According to U.S. and Sudanese sources interviewed by the author, the Wagner Group’s role in Sudan remains confined to the guardianship of mining assets and has not extended to helping the military regime retain power.

Going forward, Russia’s preferred scenario in Sudan is a transition to civilian rule that grants the military autonomy over foreign policy. This scenario would be amenable to key Russian partners, such as China, Saudi Arabia, the UAE, and Egypt and prevent the imposition of sanctions that would limit Russia’s economic ties with Sudan. It would allow Moscow to negotiate directly with the Sudanese military and drown out critics of Russia-Sudan relations within civil society. This preference will likely cause Russia to simultaneously act as a public supporter of Sudan’s transition and a spoiler of its democratic impulses in the months ahead.

Samuel Ramani is a tutor of Politics and International Relations at the University of Oxford, where he received his doctorate in March 2021. His first book on Russia’s foreign policy towards Africa will be published by Oxford University Press and Hurst and Co. in 2022. Follow Samuel on Twitter @samramani2. The opinions expressed in this piece are his own.