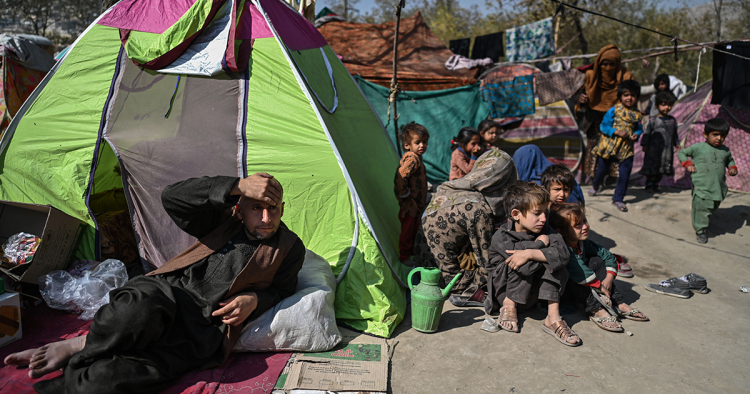 Since the hasty American withdrawal from Afghanistan in August, refugees have flowed out of the country and its domestic problems have grown increasingly dire due to the lack of effective governance and much-needed funding. Neighboring countries Iran, Pakistan, and China, along with other regional states and the U.S., now all face a dilemma as to how to stabilize the rapidly deteriorating internal situation. Further efforts must be made to address the growing economic and humanitarian crisis, especially before the onset of winter, although the nature and scope of these efforts are likely to be shaped by the broader competition between Washington and Beijing.

Pakistan, which supported the Taliban early on and shares the longest border with Afghanistan, has been dealing with the challenges of its instability for a long time, but these have worsened markedly since the American withdrawal. As of the end of September 2021, the U.N. Refugee Agency (UNHCR) documented more than 1.4 million registered Afghan refugees in Pakistan, and there are likely hundreds of thousands more who are undocumented. More Afghans are now crossing the border, spending all their resources to escape the Taliban regime. The Pakistani government has made plans for the arrival of as many as 700,000 new refugees from Afghanistan.

Iran also shares a long border with Afghanistan and like Pakistan, it too is seeing an influx of thousands of Afghan refugees fleeing the Taliban. Suffering from dire economic conditions and hit hard by the impact of sanctions, the Iranian government needs to find a way to handle this new influx. According to The Tehran Times, the country is already home to more than 3 million Afghans, including “some 780,000 Afghan refugees, over 2 million undocumented Afghans, and another 600,000 Afghan passport-holders with Iranian visas.” These high numbers and the impact of the COVID-19 pandemic — especially as new concerns arise over the Omicron variant — are taking a toll on the country. The difficult economic situation puts Iran under intense pressure and it needs every possible source of external support.

China, which shares a very short border with Afghanistan, has not allowed in any refugees from Afghanistan. The only people who it might, if only reluctantly, are the Uyghurs who escaped from Xinjiang Province and then enjoyed American protection in Afghanistan. The Chinese attitude toward this situation can be gleaned from a piece published in the Chinese Communist Party outlet Global Times, which suggests that the American withdrawal from Afghanistan is part of the broader superpower dynamic. When India hosted a summit on Afghanistan on Nov. 10, the Chinese press downplayed the prospects of a positive outcome because China and Pakistan were not involved; according to Chinese analysts, India aimed to “use the event to show its influence in regional affairs.” While China skipped the meeting “due to scheduling issues,” according to the Foreign Ministry, representatives from Iran, Russia, and the Central Asian nations of Kazakhstan, Kyrgyzstan, Tajikistan, Turkmenistan, and Uzbekistan all attended. It is not clear whether the Taliban were invited.

Pakistan and Iran are not the only countries that may face a refugee crisis, however; so too may EU member states, as they remain the ultimate intended destination for most refugees leaving Afghanistan. And dealing with the refugee crisis is just one issue for major international actors like the U.S. and EU; they also face the dilemma of how to approach the new Afghan government and whether or not to recognize it and grant it legitimacy. For now, these countries are trying to stabilize the situation in Afghanistan and to support the countries that are suffering the most from the refugee crisis.

Afghanistan’s future and the role of the superpowers

From the perspective of the Taliban, Islamabad, Moscow, Tehran, and New Delhi seem to be the key international players; Amir Khan Muttaqi, the Taliban’s acting foreign minister, held meetings in these cities during a three-day trip from Nov. 7-10. On Nov. 11, he met with U.S. and Chinese representatives in Islamabad, as well as those of Russia and Pakistan, underscoring the expansion of superpower involvement in this unstable situation.

These recent events raise questions about the future of Afghanistan under Taliban control and the interests of the superpowers, which have other objectives, including their broader geopolitical competition and access to the country’s wealth of natural resources. The answers to these questions are interrelated. China-U.S. tensions are apparent in various aspects of this crisis, as each side vies to increase its influence in Afghanistan. To prevent the superpowers from using this situation for their own benefit, the discussion about Afghanistan’s future must focus on the Afghan people and their needs amid the dire and worsening economic and humanitarian situation.

Effective, mutually acceptable mechanisms should be developed to release international aid in the form of funds and services and to help the Afghan people before the harsh winter creates even greater suffering. An international committee that includes China and America could run aid operation for the next two years until the situation stabilizes. It is possible that the Taliban will not permit such an arrangement, so the international community, and especially China and the United States, would need to be clear that it is a joint operation, which the Taliban might be willing to accept.

President Xi Jinping and President Joe Biden’s virtual meeting on Nov. 16 was an opportunity to call for international action on Afghanistan, but they had other, more pressing issues to address, such as Taiwan, Hong Kong, trade, and technological competition. The current situation gives the American administration a chance to turn the page after its hasty and chaotic withdrawal from Afghanistan in August. The two superpowers, as well as India and Russia, can win global and domestic public approval if they can put aside their conflicts and focus on a creating a better and more humanitarian resolution to America’s 20 years in Afghanistan.

The country or countries that beneficially shape the future of Afghanistan will gain a moral and diplomatic victory in the global arena. Such a victory is essential primarily for the United States, which sees itself as the leader of the free world and a democratic alternative to the autocratic regimes in China and Russia. According to a joint piece by the China and Russia ambassadors to Washington published on Nov. 26, “Military intervention in Iraq, Afghanistan, and Libya, and ‘democratic transformation’ do nothing but harm.” For now, the future of Afghanistan seems to be shrouded in fog and given the ideological differences between the superpowers, it is likely to be shaped as much, if not more, by U.S.-China geopolitical competition as developments on the ground and the needs of the Afghan people.