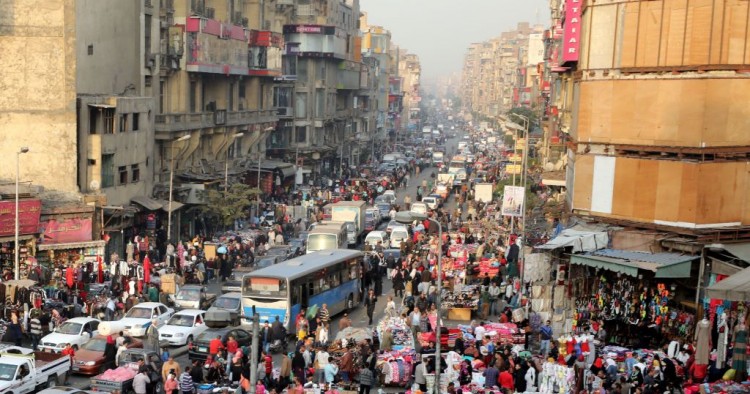 Egypt has realized a significant number of changes in healthcare, education, and economic reform policy over the past decade. It is also increasingly looking toward policy for development that emphasizes cohesive problem solving, in line with its Vision 2030 strategy, which highlights the need for positive knock-on effects from investments in human development. Yet the country’s current development trajectory faces two major challenges. First is the size of its population, estimated in the 2019 CAPMAS report at 104 million people and growing at a rate of 2.6 percent annually. Second is the increasing need for employment among the youth, which comprise 60 percent of Egypt’s total population and have growing expectations for the provision of better services. These challenges are coupled with a young population exposed to globalization, a government system that has faced capacity issues for decades, and a bureaucracy that requires significant restructuring to meet needs. Egypt must overcome all of these hurdles as it pursues its national reform agenda and look for solutions that are both immediate and sustainable in the long term.

Sustainable development management as a foundation for Egypt’s economic, social, and environmental future is becoming a matter of increasing urgency, and investment in human development needs to be properly managed and monitored to ensure long-term success and improvement in the lives of Egyptians. Without sustainable development management and a participatory approach, Egypt could run the risk of expending large sums on investment and accumulating unforeseeable debt for short-term projects without considering the long-term and even intergenerational benefits for society.

In order to understand the need for cohesive sustainable development it is important to look at each of the defining changes Egypt has undergone since the 2011 uprising and the five-year period of turmoil that preceded it. In 2017, the economic reforms undertaken as a corrective measure had a huge impact on the daily lives of Egyptians and the wider economy, affecting the incomes and purchasing power of the middle classes. Food, electricity, and gas prices increased, and consumer behavior had to adapt and respond instantly. Social protection measures for the poor were implemented to create a buffer to the harsh impacts as the flotation of the currency caused ripple effects and inflation increased to 300 percent.

In 2019 the positive and stabilizing effects of such reforms began to become visible, leaving behind a shrunken middle class to recover. A complete restructuring of healthcare, pensions, and population growth policies has seen a $9 billion investment that has led to positive results in the form of increased life expectancy and reduced infant mortality. These ongoing national projects are focused on raising awareness and improving the provision of services to increase the quality of life for Egypt’s very poor. The national eradication of Hepatitis C, the implementation of anti-drug-use campaigns, as well as the criminalization of child marriage, female genital mutilation, and violence against women, along with the launch of an anti-bullying and mental health support network all reflect the increasing importance of human development in the national agenda. Education is also set for a complete overhaul and is already being tested with assistance from the World Bank and investment in early education and vocational training to boost job growth. In addition, there is a national project to provide employability training based on the needs of the market for particular skills. Women, religious minorities, and indigenous groups have seen significant inclusion too in the political and legislative processes. Egypt’s national mega-projects, such as the construction of a 7000-km road network, energy infrastructure, the New Administrative Capital, and 14 new nodal smart cities, are a natural reaction to meeting the demands of a growing population and the need for rapid job creation.

While there are improvements on many fronts, sustainable development management remains essential to ensure these national projects and policy reforms have the desired impact and will consistently help to foster the growth of a strong middle class in Egypt again. The country cannot exhaust its current resources to bring its economy, education, and healthcare sectors up to date without taking measures to ensure it has the capacity to maintain the positive impacts of these reforms for generations to come.

There are two key issues for which Egypt must have a policy buffer while continuing its development path: water security and regional instability. As major national security priorities, both are known to be well monitored. However, in order to ensure that sustainable development is at the heart of all reforms, more needs to be done to promote inclusion and awareness.

Water scarcity and climate resilience should be tackled in a broad-based manner, not just from a national security perspective. Action needs to be taken across the board as these issues will hinder progress in all sectors, particularly efforts to improve livelihoods and advance economic development. Cultural investment for the preservation of natural heritage and civil inclusion in preservation remain topics among the educated elite, but investment in mainstreaming such measures has not yet been encouraged.

Regional instability requires Egypt to look more closely at its micro economy and informal sector because this huge, underexplored, and unregulated segment acts as a stabilizer during times of unrest in the region. Local economic resilience is a powerful asset for Egypt, creating a sector of entrepreneurs and potential exports that can flourish given the scale of the local market. Egypt should explore the opportunities at its feet to mitigate the negative ramifications of regional conflicts. In 2014 Egypt had to create 4 million jobs for its nationals returning from war-torn neighboring countries as well as host an equal number of refugees. The country is now open to trade with Africa as part of a reform policy aimed at expanding local market opportunities and forging new partnerships on the continent, with a particular focus on infrastructure projects and cultural exchange. This is part of a new foreign policy effort to better connect Egypt to Africa economically as well as geographically and expand beyond its traditional focus on the Middle East and the Arab World. This new focus on Africa offers considerable potential for sustainable development and could serve as a launch pad for young people to harness their creativity and flourish.

For Egypt, sustainable development is a necessity, not a choice — one that will magnify, extend, and expand the positive impacts of existing investments and reforms. It will also help to ensure they perform as expected, providing deliverables that will ultimately be reflected in improvements in the lives of Egyptians, who are eagerly observing these changes. A country as large as Egypt cannot afford quick-win scenarios as it enters a cycle of stability and adaptation; the key to tangible, lasting progress is resilient services, better quality, and above all investment in future generations with independence in mind.

Sarah El Battouty is a non-resident scholar at MEI, an award-winning architect with 18 years’ experience in the field of green and environmental building, the founder of one of Egypt’s leading environmental design and auditing companies (ECOnsult), and a senior advisor to the Egyptian president on sustainable community development. The views expressed in this piece are her own.