As Syria looks to rebuild, sanctions remain a major barrier to trade and investment 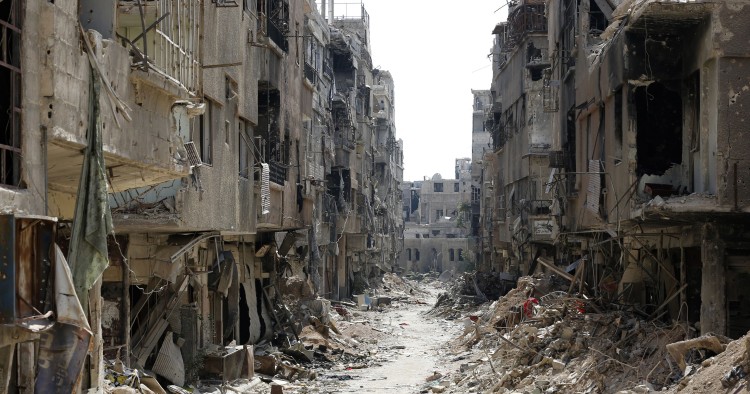 Syria’s seven-year war has destroyed much of the country and now seems to be in its final throes. As the conflict concludes, the next phase will center on rebuilding, with a particular focus on trade and investment. Major players, corporations, development agencies, and governmental institutions are now exploring opportunities in this area.

In terms of financing, economists estimate the need for investment at somewhere between $250 billion and $1 trillion. At present, however, this money cannot flow into Syria due to the sanctions imposed by the U.S., the U.K., and the EU, which constitute an embargo on Syria’s economic development, and include both primary and secondary sanctions.

Primary sanctions are imposed by sanctioning countries on their citizens and companies, prohibiting them from dealing with counterparts from nations that have been sanctioned. These are usually in the form of asset freezes and trade embargoes. Secondary sanctions are indirectly imposed on third parties by pressuring them to halt their transactions and activities with the sanctioned country. These third parties are typically threatened with losing access to the sanctioning country, and especially the use of its financial system to carry out international trade.

Syria faces both types of sanctions, which cover property, trade, security, financing, loans, insurance, imports, petroleum products and energy, technology and other areas—in effect, most of the productive sectors of the economy. As a result, sanctions are a major hurdle for those looking to invest in or carry out trade with Syria.

Seen from a legal perspective, sanctions regulations usually involve three components: an object, a subject, and a penalty. However, what extends their scope exponentially is the dimension of political risk: at all times there is an underlying risk of indirect exposure for persons and companies due to the ambiguous wording used in the text of the sanctions, which leaves room for interpretation. As a result, any person or company that does not directly fall under the scope of the sanctions can still be exposed to the sanctioning country.

Let’s begin with U.S. sanctions since they’re the most exacting and examine the object, subject, and penalty.

Subjects are a list of Specially Designated Nationals (SDN), maintained and updated in a U.S. federal register. These are the persons whose properties are frozen or with whom transactions are prohibited.

The penalties are monetary and go up to the greater of $250,000 or twice the amount of the underlying transaction; upon conviction, the penalties may go up to $1,000,000, imprisonment for up to 20 years, or both, for any person who violates, attempts to violate, conspires to violate, or causes a violation of the sanctions regulations. In short, U.S. sanctions on Syria mean no U.S. person, regardless of location, may transact with the Government of Syria or persons or companies affiliated with it, on property, investment, services, products, and petroleum, subject to severe sanctions.

A deeper analysis reveals two points: first, the SDN list is regularly updated, which may make any potential investor reticent about conducting business with a Syrian person not presently on the list, given the risk that they may be added to it in the future. Second, sanctioning the approval, financing, facilitation, or guarantee by a U.S. person of a transaction by a foreign person that would be prohibited if performed by a U.S. person or within the United States is a secondary sanction that widens the scope of the subjects and objects to all persons worldwide who either carry out transactions via the U.S.-monitored SWIFT international bank transfer system or in the U.S. currency.

As most international transactions are carried out in dollars, this means all types of investment and trade with Syria are frozen, thus necessitating a search for alternatives. There are, however, several possible options that would allow for trade and investment in Syria, whether the sanctions are lifted or not.

First and foremost, if sanctions were removed, money could flow freely into the country with no legal restrictions or operational risks. For this to happen, there would need to be a negotiated political settlement between the major and supporting players in the Syrian war, including the U.S., Russia, Turkey, Iran, and Saudi Arabia. This solution would involve drawing up a roadmap for investment and reconstruction, lifting some financial sanctions, and facilitating access to capital in Syria, in both dollars and other currencies. The money would flow through the SWIFT system, and would give an advantage to the players involved in the settlement, especially the U.S., in terms of monitoring financial transactions to and from Syria.

Should there be no negotiated political solution, however, there are alternatives, subject to risks and other considerations.

The first option is an alternative to SWIFT, which was initially a neutral cooperative organization for sending and receiving financial messages, but has come under close U.S. scrutiny in recent years. Many payment and card services have been developed that avoid the SWIFT system. Two of the most relevant in this context are China UnionPay (CUP) and Karta Mir. CUP is a cross-border card payment system that is approved by the Central Bank of China and is now accepted by more than 1800 institutions in 170 countries and regions worldwide. Karta Mir is its Russian equivalent, established by the Central Bank of Russia.

These options are mainly for Russia and China. An alternative for Europe would be gateway banks, which would allow it to invest in Syria while avoiding the risk of being hit by secondary U.S. sanctions. Gateway banks are special purpose vehicles that would be created for Europe-Syria trade finance operations. They would be designed to avoid sanctions on access to the dollar, but the risk would be minimal even if they were hit, as they would be small and work without the U.S. currency. Their purpose would be to serve as an intermediary between European and Syrian banks. They would look like barter houses where the euro is one stock and the Syrian pound the other, creating a market for the swap to take place without the need for an intermediary currency.

A third option is a credit-based barter exchange. Barter is the original form of trade and pre-dates the invention of currency. Modern barter, which is a booming business in many parts of the world, is not restricted to an exchange between two parties, each in need of the other’s stock. It can be multilateral and works as follows: a credit system is created inside a barter house, every deposit of stock is given a number of credits, and these credits can be applied to any stock at the barter house. Such a system can be expanded to a larger number of participants, a country, or even many countries.

Other options include an oil-for-reconstruction program, similar to the Iraqi oil-for-food program, whereby oil is exported against investment in reconstruction, all paid for through escrow accounts; the de facto development of black or grey markets where smuggling of money may happen, with or without the knowledge of authorities; or the evolution into autarky, where a country makes itself self-sufficient, which slows reconstruction but increases resistance to external pressure.

In the longer run though, there is a larger structural issue that needs to be addressed. At present, the U.S. Office of Foreign Assets Control (OFAC) serves as the world’s major compliance enforcement agency and all cross-border transactions are exposed to U.S. scrutiny. This allows the U.S. to review and block transactions that are not in line with its interests, and exposes other countries to the risk of secondary sanctions affecting the systems used to carry them out. Thus, there is a clear need to develop regional agencies, along the lines of the U.S. OFAC, that would take over responsibility for monitoring and supporting due diligence on transactions carried out between banks domiciled in their regions and the Central Bank of Syria.