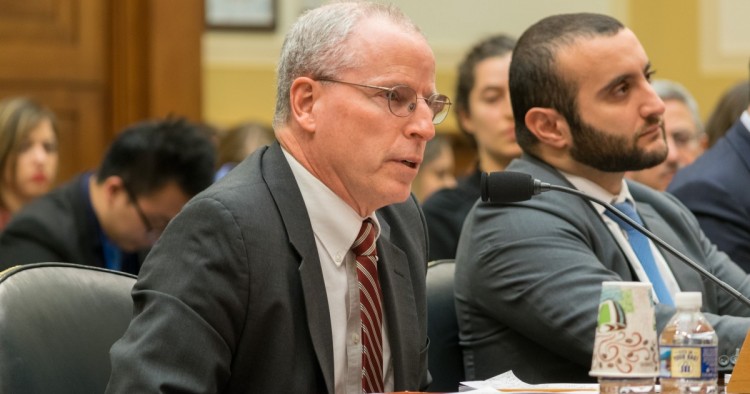 The below testimony was delivered before the House Foreign Affairs Committee by Amb. (ret.) Robert S. Ford on February 6, 2018. See also testimony by Charles Lister, delivered at the same hearing, or the video webcast of the proceedings.

Mr. Chairman, distinguished members of the Committee, It is an honor to appear before you today. I thank you for your invitation.

I am glad the Committee is holding this hearing about our policy in Syria. Through superb efforts led by our military and with the excellent help of our diplomatic team, America and its allies have largely seized territories the Islamic State of Iraq and Syria (ISIS) had controlled.

The Syrian Army and its allies also took back territory, including the long-time stronghold of Deir Zour.

ISIS has not gone away entirely, but compared to even 12 months ago the ISIS picture looks far better. I suggest this Committee now consider what comes next for us in Syria.

Where We Are Now

As of December 6, 2017 there were about 2,000 US forces in eastern Syria. That number may have declined slightly. Our forces, including our air force, operate east of the Euphrates River which serves as an informally agreed demarcation line between our forces and those of our allies, and the Russian, Iranian and Syrian government forces operating west of the river.

The administration has stated that it intends to leave US forces east of the Euphrates to go after ISIS insurgents when they can be found and to recruit, pay, train, equip and sustain local security forces in eastern Syria to go after ISIS and to ensure stability.

budget request included $430 billion to build local security forces and the FY 2018 request was for $500 million.

The U.S. also has deployed a small civilian team into Syria charged with initial reconstruction and building new local governance or improving on existing local governance. If it sounds like nation-building, it is but on a smaller scale. USAID and other civilian agencies have provided $875 million in non-lethal and stabilization aid to opposition-controlled areas in Syria since FY 2012. Last year alone the US provided about $200 million.

If you add all these numbers up, US military and civilian costs in Syria over the past 4 years are at least $12 billion. That’s a lot of money. And it’s not clear when those outlays will stop.

Our military and civilian personnel on the ground in Syria will be targeted, eventually. The Syrian and Iranian governments, and Russia, all want us out of Syria. The Syrian intelligence network is active in eastern Syria. The Syrian Government won’t risk a direct attack against us, but its more unconventional tactics from Lebanon in 1983 and 1984 to Iraq between 2004 and 2009 suggest what actions it would take against us. This could include car bombs, assassinations of our personnel and the local people who work with us, mortar hit and run attacks. It is worth remembering that the Syrian government often cooperates with terror groups against us, as it did in Iraq.

We are paying costs and accepting risks in Syria. What for? Earlier this month Secretary Tillerson laid out a set of goals the United States has for Syria.

I’ll review the Adminstration’s objectives briefly. They are admirable goals, but I don’t see how we can achieve most of them with our current resources and policies and with the larger course of events underway in Syria.

1. defeat and contain ISIS and al-Qa’ida. I already discussed the great progress against ISIS. Local forces we are building in eastern Syria might help reduce and preclude a large return of ISIS if the politics in eastern Syria are right. It is less clear when or if they could ever be self-sustaining.

As for our destroying al-Qaida in Syria, it is concentrated in northwestern Syria now, far from our forces and in an area where the Russian and Syrian air forces predominate. It is, in effect, on their side of the demarcation line.

2. resolve the Syrian conflict through a United Nations-led political process, such as the one in Geneva.

The UN process, however, is moribund; eight rounds of Geneva talks have made no significant progress on anything. Instead, Russia is now moving to establish a separate track that would amend the Syrian constitution and move the country towards sham elections that the Assad Baathist government will win handily.

The Syrian conflict, however, was never about constitutions and elections. It started 7 years ago as a problem of lack of rule of law in a vicious security state and lack of accountability for officials who treated their own population capriciously and ruthlessly. A new constitution and new elections won’t remove or even change that essential security state.

Through its military advances on the ground, that Syrian security state will stay. A thousand or two thousand US forces in eastern Syria, 350 or 400 miles from the capital, will not change that. The Syrian government is not only ruthless. It is also patient. It will concede nothing of value at a negotiating table when its military position is secure and it will wait years if needed for us to leave while it constantly harasses us. Our existing policy can’t deliver this second goal of reforming or changing the Syrian government.

3. reducing Iranian influence. Given the threat Iran could pose against Israel, this makes sense to me. However, the presence of a small US force far away in northeastern Syria won’t hurt the Iranians in western Syria nor compel them to depart. It is wishful thinking to assess otherwise. The Iranians don’t need a landbridge from Iran to Lebanon. For many years they just used Damascus airport. It is not our policy, as I understand it, to shut down Damascus airport.

4. the safe, voluntary return of refugees to Syria. This too is a laudable objective. In fact, some refugees are returning, but larger-scale returns depend mainly on a wider cessation of violence and for many of them a sense that the Government will not harass or detain them. In some cases the government is actually invalidating property deeds as part of a program to change populations of particular urban neighborhoods. Moreover, without economic reconstruction, millions of refugees have neither homes nor jobs and schools to return to. The Syrian government is attacking and advancing in northwestern Syria; this may well result in a net outflow rather than a net return of refugees. The U.S. has little real leverage over the Syrian government with its current policy, and we cannot do much to fix the problems impeding refugees from returning.

I have appeared before this Committee several times before and I repeat what I have always said: there is no quick fix to the Syrian conflict.

I would recommend the Committee focus on goals we can reasonably achieve with the resources the Congress is prepared to give for our Syria policy going forward.

Here are some specific suggestions:

I would add here that sober analysis should recall the limits to our abilities demonstrated in Iraq and Afghanistan.

Though Syria is not Vietnam, and our war effort in Syria is not like what we tried to do in Vietnam, we can learn lessons from our history. More than ever I think we should heed the words of former Defense Secretary Robert McNamara in his book summing up what he learned from the long, failed American effort in Vietnam.

McNamara urged great caution before we get involved long-term in foreign civil wars. He stressed that we cannot fully understand the complexities of local civil wars, and some foreign policy problems have no real resolution. That certainly does apply to Syria. I don’t think anyone would suggest there is a more complicated conflict than what we see now in Syria.

Thank you, Mr. Chairman, and I look forward to discussing these issues with the Committee and the panel.