The Syrian Conflict and the Ascendancy of the Lebanese Armed Forces 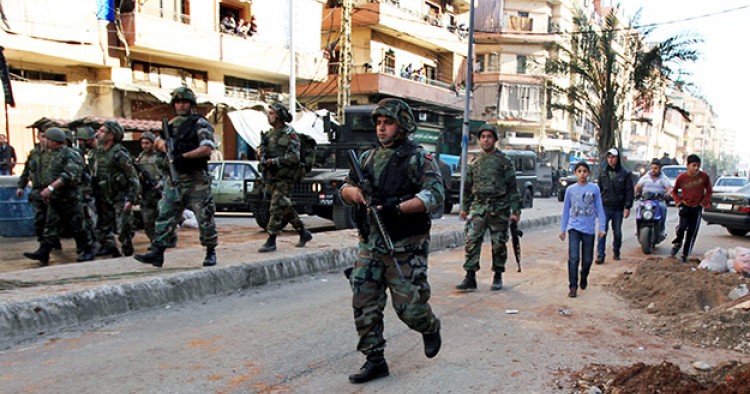 In the past, the Lebanese Armed Forces’ (LAF) inability to confront or deter Israel was reflected as political weakness for the Lebanese government vis-à-vis Hezbollah. Israel's withdrawal from south Lebanon in 2000 heralded a growing political role for Hezbollah. This role was further enhanced by the 2006 war with Israel, with Hezbollah claiming victory and consolidating its influence within the LAF and the government. Neither Security Council Resolutions 1559 and 1701, which mandated the disarmament of Hezbollah, nor Western support for March 14 forces could reverse the rising tide of the group, which had forged an alliance with General Michel Aoun, thereby securing credible Christian support. Even a sizeable faction of the Sunnis was sympathetic to Hezbollah due to its role as a deterrent force against Israel. The Palestinians, the second best armed faction after Hezbollah, were close allies. As such, the Lebanese government could not do much to confront Hezbollah. In May 2008, the group, in response to a government decision to dismantle its land-based communications network, took over Beirut while the LAF stood by. Hezbollah's military and political dominance was complete.

The Syrian crisis is changing all that. Quietly over the past few years, the LAF has been developing a credible force, with U.S. assistance. The training and materials geared toward counterterrorism, internal security, and border control were not seen by Hezbollah as a threat to its military arsenal of rockets and long range missiles. As it turns out, the LAF was better prepared for the Syrian crisis and its spillover into Lebanon. The elite units of the LAF, notably the rangers, commandos, and navy seals, were specifically trained in urban warfare and in confronting irregular forces and counterinsurgency. U.S. military equipment, while not relevant in a context of confrontation with Israel, is well suited to countering irregular forces and border control. A modest but credible helicopter force provides mobility. More importantly, the delivery of Cessna aircraft gave the LAF advanced surveillance and reconnaissance abilities as well as pinpoint firepower with Hellfire missiles. More conventional weapons such as M198 Howitzers as well as M-60A3 and M48A5 tanks offer accurate and continuous firepower.

On the other hand, Hezbollah's involvement in Syria exposed its lack of direct firepower as well as its inadequate surveillance for guerilla-style warfare in which it is on the receiving end. The conflict now involved jihadis with light weapons and mobile anti-tank missiles facing Hezbollah fighters with similar weapons. In a sense, Hezbollah had prepared for the wrong war. Long range missiles and short range Katyusha rockets designed for a war against Israel were now of little use. Chinese anti-ship missiles as well as concealed anti-tank and short range missiles in south Lebanon facing Israel seemed of little military value when the real threat to Hezbollah came from across the long and ragged border with Syria. Hezbollah did not anticipate this and was ill prepared for irregular warfare and border control. It has resorted to erecting fixed positions not unlike what the Israelis erected in south Lebanon.

The battles by the Syrian Army and Hezbollah 18 months ago to control the Damascus-Homs highway drove several thousand Jabhat al-Nusra fighters into the Qalamoun plateau, an area roughly 60 by 20 kilometers straddling Lebanon and Syria. Isolated from Syria, the town of Arsal in Lebanon was the logistical base supplying the insurgents. On August 2 in a surprise attack, Jabhat al-Nusra and the Islamic State struck the LAF in Arsal. Though 36 military personnel were taken hostage, the LAF quickly repulsed the attack, putting to good use its Hellfire-armed Cessna with a ground counteroffensive. The insurgents suffered an estimated 150 to 200 casualties.[1]

Having given up on Arsal, the Syrian insurgents most recently attacked ten Hezbollah positions. The attack on one position, Nabi Sbat in Lebanon, was seen in a video that showed the position being stormed and the bodies of several Hezbollah fighters.[2] A booty consisting of TOW missiles (probably of the Iranian type) was also shown. It is rumored that out of 60 or so Hezbollah fighters, many fled.[3] On the Syrian side of Qalamoun in Asal al-Ward, several Hezbollah fighters were reportedly taken prisoner, among them an 18-year-old who was shown on YouTube pleading for his life. Hassan Nasrallah had to appear in military fatigues in east Lebanon to shore up the morale of Shi‘i towns and fighters.

The Syrian conflict has been detrimental to Hezbollah's political standing as well. In addition to antagonizing the Sunni Lebanese and Palestinians, Hezbollah’s involvement inflamed sectarian tensions. Despite a few Sunni defections, the LAF shows little signs of fracturing though Sunnis constitute almost half of the forces. In a recent bold move, the LAF took control of Tripoli, the second largest and predominantly Sunni city in north Lebanon with a sizeable Alawi community. Tripoli had been a hotbed of Sunni radicalism and had seen violent clashes between Sunni radicals and Alawi fighters supported by Hezbollah. The LAF move was endorsed by all Lebanese leaders, including those from the Sunni community.[4]

Thus, despite sectarian tensions the LAF has overwhelming popular support in countering extremism and terrorism. In contrast, Hezbollah has lost ground politically and is overstretched militarily. The political void Hezbollah has left behind is gradually being replaced by a more assertive LAF. LAF monitoring towers are being erected in sensitive areas along the Lebanese-Syrian border, to which Hezbollah would not have acquiesced three years ago. An offer by Iran to supply the LAF with ammunition and light weapons, which would endanger U.S. support, was politely rejected by the Lebanese government. A Saudi gift of $3 billion will further boost the capabilities of the LAF.[5]

The most immediate danger to Lebanon is not from an ISIS incursion from Syria, but would be from a fracturing of the LAF due to sectarian tensions. By remaining a united, effective force with widespread popular support, the LAF has thus far helped Lebanon weather the sectarian storm. As the dust settles on a politically isolated and militarily weary Hezbollah, only a strong LAF can ensure a smooth transition to sovereignty and normalcy.

[3] Personal communication with a source close to Jabhat al-Nusra.