The Syrian Druze at a Crossroads 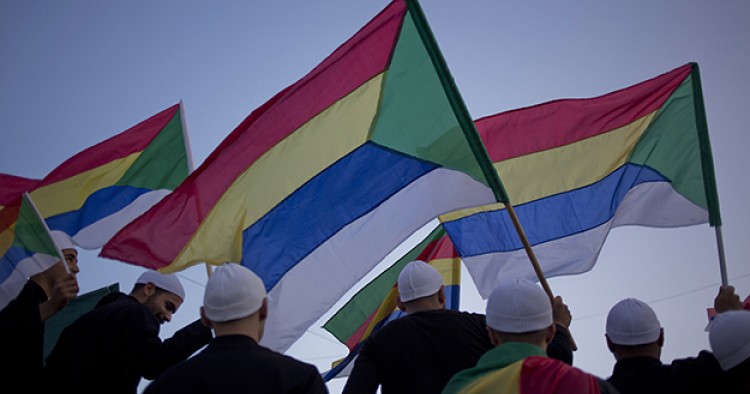 In the last few weeks, the Syrian Druze have been a focal point in significant fighting on the ground. If their role in the fighting continues, or even if it changes, the Druze will likely have a profound impact on the trajectory of the Syrian conflict. 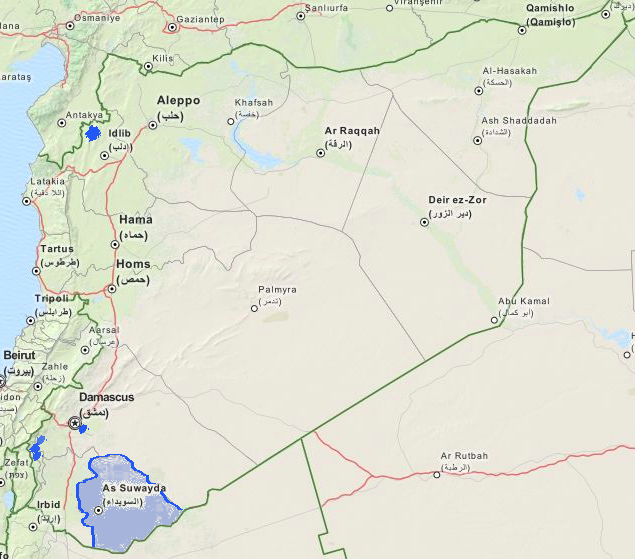 When the Syrian uprising erupted, some Druze joined the peaceful protests against the Assad regime. In 2011 and 2012, several pro-opposition protests took place in the province of Suwayda. Security forces and Druze loyalists attacked the protesters, and the demonstrations disappeared gradually as violence and sectarianism increased.

Fighting on the Ground

In the northwest, relations between the Druze and Syrian rebels have evolved dramatically since late 2013. First, ISIS demanded that the Druze convert to Islam, and it tried to impose a dress code and other strict measures such as adding domes and minarets to places where Druze pray. Shortly thereafter, ISIS was defeated in clashes with the Syrian Revolutionaries Front (SRF) and, to a lesser extent, the Islamic Front. SRF, an alliance formed in December 2013 by Free Syrian Army brigades, was spearheaded by Jamal Maarouf after Islamist groups, including Ahrar al-Sham and Al Tawhid Brigade, formed the Islamic Front. SRF tried to maintain good relations with the Druze. Maarouf visited the Druze village of Qalb Lawzeh, met with local leaders, and gave them assurances about their safety. However, Jabhat al-Nusra competed with SRF to control Druze villages and other areas in Idlib. In late October 2014, the tension between Nusra and SRF reached a climax and Nusra expanded its military campaign against SRF. Maarouf and his fighters lost ground, fled to Turkey, and relinquished their positions in Syria. Nusra is currently the dominant group in the northwest.

On June 10, Nusra killed more than 20 people in Qalb Lawzeh. According to reports from the region, Nusra leader Abu Abdulrahman al-Tunisi (aka Safina) along with his fighters wanted to confiscate houses rumored to belong to Druze army officers currently serving in the Syrian Army. Druze neighbors objected and confronted them. Three days later, Nusra issued a statement in regard to the incident that described it as an “unjustified mistake” of which Nusra leadership was unaware; the statement assured that those who took part would be prosecuted in a Shariah court.

In eastern Syria, ISIS has freedom of maneuver across large swaths of uninhabited land between Palmyra and Suwayda in the south. On April 18, ISIS fighters attacked Suwayda and captured the village of al-Qasr in the northeastern part of the province. A few days later, the group attacked al-Huquf and Khalkhalah air base.

It is unclear what the priorities of ISIS are in Suwayda. Although the regime has two air force bases in the province (Khalkhalah and al-Thulah), Druze will most likely form their own militias and will make any attack costly for ISIS. Moreover, Suwayda has no oil or natural resources that can benefit ISIS.

Nevertheless, ISIS might try to open corridors in the south to the Jordanian border through Druze villages in Suwayda’s eastern countryside such as Barek, Douma, and Rushaydah. (See map below.) 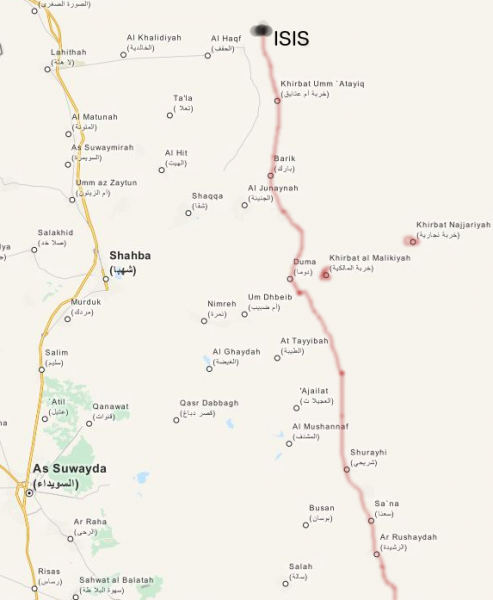 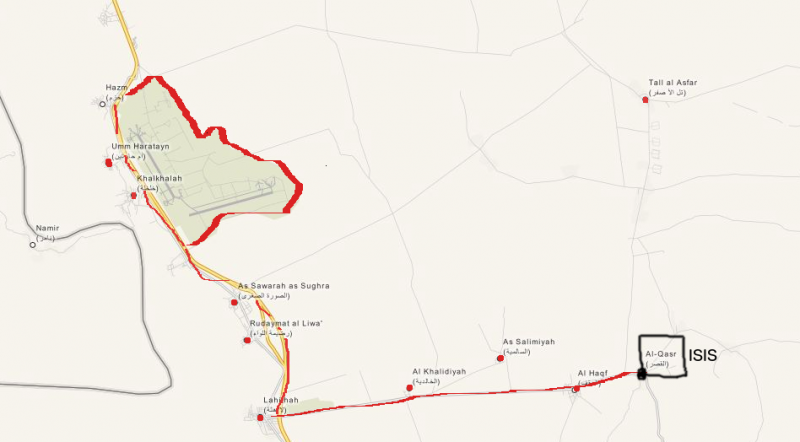 In the southwest, Druze reside on both sides of the Syrian-Israeli border. The rebel alliance called the Army of Hermon, led by Nusra and Ahrar al-Sham, wants to connect besieged Beit Jinn south to Jubata al-Khashab by capturing Druze villages. The Army of Hermon would then be able to connect Damascus suburbs, Quneitra, and Daraa. The Druze village of Hader is the largest, and the rebels see it as loyal to the regime. The fighting between the pro-regime Druze and the Army of Hermon is taking place on the edge of the buffer zone that was established in 1974 by the UN as part of the disengagement agreement between Syria and Israel, around Hader and another village, Tilal al-Humr.

On the Israeli-occupied side of Mount Hermon, Druze in Majdal Shams are closely watching the developments across the border. Many of them have relatives in Hader. In late June, dozens of Druze attacked an Israeli military ambulance transporting wounded Syrian rebels and killed one of the rebels.

In the past two years, Israel has treated hundreds of wounded Syrians in a field hospital near the border and has transported critical cases to hospitals inside Israel. In the future, Israeli Defense Forces might use helicopters to transport injured Syrians to avoid such confrontations with Druze villagers. Moshe Yaalon, Israel’s defense minister, visited the Golan Heights on July 1 and stated that while Druze leaders cooperate effectively with Israel, “they may not have control over hot-headed young people.”

Yaalon also recently stated that Israeli aid to Syrian rebels is conditional in two ways: the rebels must prevent terrorist attacks on Israel and refrain from harming the Syrian Druze. He added that all attacks on Israel that have come from the Syrian side were launched from areas under the control of the Assad regime rather than the rebels.

Israeli Druze have protested on different occasions to pressure their government and the international community to protect the Syrian Druze. They have collected donations and sent them to the Syrian Druze to help them buy weapons and other necessities.

Although the Druze community is not connected geographically, the various populations affect each other, such that any attack on the Druze in the north could trigger a reaction from the Druze in the south, and any incident in Israel could affect relations between rebel groups and the Druze in Syria. Rebel groups might seek revenge against the Syrian Druze.

Walid Jumblatt, the Lebanese Druze leader and president of the Lebanese Progressive Socialist Party, understands well these intra-Druze dynamics, and he has been navigating regional politics to mitigate their impact on his community. He met with King Abdullah of Jordan on June 17 and discussed the situation of the Druze in southern Syria. Jumblatt tweeted that he wants to mediate a reconciliation between the Sunnis in the city of Daraa and the Druze of Suwayda to keep Suwayda out of the Syrian conflict. He accused the Syrian regime and Israel of fueling the conflict between the Druze and the Sunni communities inside Syria. Jumblatt sought assurances from the Syrian opposition and Turkey to protect the Druze in the north, and from Saudi Arabia, Jordan, and the Military Operation Command (MOC) in Amman to protect the Druze in the south.

Wael Abu Faour, health minister for Lebanon who is a member of Jumblatt’s ministerial bloc in the Lebanese cabinet, visited Turkey to seek protection for the Syrian Druze. He met with representatives of Ahrar al-Sham and other Syrian opposition armed groups, and with Khaled Khoja, president of the Syrian National Coalition. These groups put pressure on Nusra to condemn the incident of Qalb Lawzeh, and as a result Nusra issued the statement mentioned above. Abu Faour then visited Saudi Arabia with the same objective.

Concurrently, Wiam Wahhab, a Druze Lebanese politician close to the Syrian regime, visited the village of Hader on June 25. He encouraged the Druze there to stay aligned with the Assad regime and to fight until the end.

Unlike in Lebanon, the Druze in Syria lack a unified political leadership. The three traditional religious Druze leaders are Hammoud Hinnawi, Youssef al-Jarbou, and Hikmat al-Hajri. All are heavily influenced by the regime and as a result do not represent the bulk of the Druze community’s position vis-à-vis the Syrian revolution. However, new leaders have emerged in the last year in opposition to the Syrian regime. The most prominent individual in this group is Sheikh Waheed al-Bal’ous.

Before 2014, Bal’ous was not well-known outside Druze circles. In August 2014, a battle between Sunni Bedouin tribes and Druze popular committees (pro-regime local militias that monitor neighborhoods and control checkpoints) occurred near the village of Dama in the west of Suwayda. Skirmishes between Druze and Bedouins around Suwayda have always occurred due to disagreements over grazing, and in the past two years tensions have increased and mutual kidnappings for ransoms have taken place. Neither the Free Syrian Army nor the Syrian Army took part in the battle of Dama. The battle resulted in 18 Druze casualties, one of whom was Waheed al-Bal’ous’s brother. Bal’ous accused the regime of abandoning the Druze during the battle, and called upon the Druze to refuse to join the Syrian Army.

In January 2015, Bal’ous and other Druze fighters attacked a checkpoint in Suwayda manned by members of the air force intelligence service because they tried to draft a young Druze man into the Syrian Army. In February 2015, the three traditional religious leaders issued a statement disowning Bal’ous, and Jumblatt condemned the statement. However, the statement helped elevate Bal’ous’s status inside the Druze community as a leader of the camp that is opposed to the Syrian regime.

The developments in regard to the Syrian Druze community have the potential to impact the future trajectory of the Syrian conflict. Because Suwayda is the religious and political stronghold of Syrian Druze, future developments there will shape the role of Druze in Syria’s evolving conflict and will impact the behavior of other Druze-majority areas in Syria. If the Druze of Suwayda and the Sunni tribes in Daraa drift into an armed conflict, it would protract the Syrian crisis, increase the probability of dragging neighboring countries more deeply into the war, and weaken the position of the Free Syrian Army in the south because it would then be fighting three forces: the regime, ISIS affiliates, and the Druze. Certainly, ISIS stands to gain the most out of this scenario. The second possible scenario is a new modus vivendi between the Druze and their Sunni neighbors that would allow the Druze to maintain their neutrality in the ongoing conflict. This would require the Druze to further distance themselves from the regime and to have their own, independent leadership. This scenario would weaken the regime’s standing in southern Syria and would prevent ISIS from strengthening its presence in the region. The last scenario is the continuation of the status quo. However, the status quo could not remain for long, especially as ISIS and Nusra want to inflame the conflict in southern Syria and the regime wants to encourage the Druze to fight on its side.