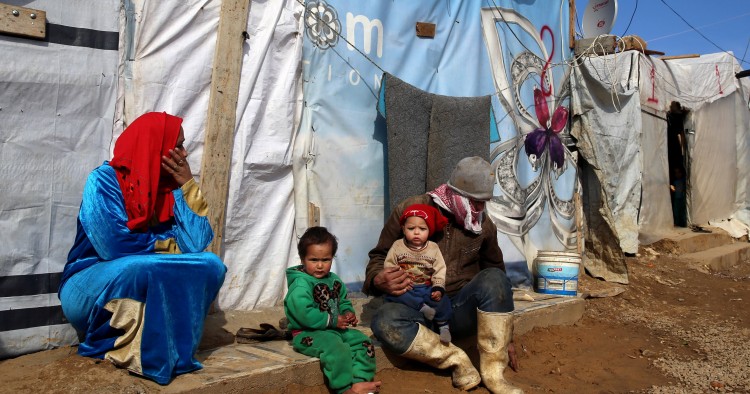 This essay is part of a series that explores the human costs and policy challenges associated with the displacement crises in the Mediterranean and Andaman Seas. The essays consider the myths or misconceptions that have pervaded discussions about these two crises, as well as the constraints or capacity deficiencies that have hampered the responses to them. See more ...

The term ‘resilience’ is not new in the literature on humanitarian response, disaster, and crisis management. Simply defined, resilience refers to the ability of a community or a system to withstand external shocks and to develop coping mechanisms against these shocks. The huge influx of Syrian refugees into Lebanon has placed an enormous strain on the country’s already fragile economy, society and politics. In absorbing this massive external shock, Lebanon has thus far displayed extraordinary community resilience. In that sense, Lebanese communities have actually something to teach the world about welcoming refugees and sharing limited resources despite social, political, and economic grievances caused by the crisis.

International donors’ promotion of the narrative of Lebanon’s resilience has come at a cost, namely the further delay of structural and political reforms that are of critical importance to the country’s future. Donor plans for resiliency in Lebanon appear to have left little or no role to the Lebanese authorities, and have thereby reinforced the Lebanese system and the recurrent deadlocks over social, political, and security issues. Glorifying the concept of resilience has tended to normalize Lebanon’s abnormalities. Given the Lebanese government’s belated and inept handling of the refugee crisis, championing Lebanon’s ‘resilience’ nearly amounts to absolving the Lebanese state of its responsibility to contribute to that very resilience.

The Context of the Refugee Crisis in Lebanon

Despite decades of internal strife, a 17-year civil war, and a three decade period of tutelage by the Syrian regime, Lebanon’s political system has exhibited resilience in the form of path dependence on sectarian representation and on weak state institutions. Lebanon is effectively governed by political elites who took part in the war either as leaders of armed groups or as financiers of the conflict, and who subsequently found their way into government. The 1989 Taif agreement, which ended the civil war, distributed power to political actors who granted each other amnesty and re-entered the game of parliamentary elections through an intricate web of clientelistic relations.[1] In that sense, the Lebanese power-sharing formula that had prevailed prior to the conflict remained largely intact after it.[2]

The main vehicle of popular representation continues to be the sect, with citizens casting their votes on the basis of their ancestral origin and their sect. While political parties do exist, their power base and supporters are almost uniformly made up of a homogeneous sectarian membership.[3] Citizens receive basic services, employment, security and other benefits from powerful non-state actors, or zu’ama. Lebanon’s personal status laws are sectarian and governed by religious courts (a legacy of the Ottoman millet system). Political agreements are reached through back-door deals (e.g., the recent reconciliation between warring Christian elites Michel Aoun and Samir Geagea), through national dialogues (e.g., the summer 2015 failed dialogue to select a President), or under the auspices of foreign patrons (e.g., the 2007 Doha agreement). Parliament and Cabinet as institutions are sidelined until a macro political agreement can be made.

Since the 2005 assassination of Prime Minister Hariri, political elite have been polarized between the pro-Syrian March 8 camp and anti-Syrian March 14 factions. This polarization has had the effect of bolstering the political system rather than undermining it.[4]

Historically, when politicians have disagreed, either deadlock or civil strife has ensued. The Syrian refugee crisis has replicated this pattern. The crisis has divided the political elite, though not to the extent of causing them to revise the sectarian formula. It has led them, instead, to turn to their foreign patrons for support, thereby contributing to the further weakening of state institutions.

The absence of national-level policies has thrust upon municipalities the responsibility and the burden of housing refugees, mitigating conflict, and averting crisis. Report after report by U.N. agencies and others seek to bolster and to celebrate Lebanon’s resiliency.[5] But the majority of these reports suggest strategies for fostering resilience that focus on the role of civil society, municipalities and local businesses—omitting the key role of the central government in devising approaches and policies to address the refugee crisis.[6] Thus, the effect of foreign patrons’ and donors’ efforts to help Lebanon respond to the needs of Syrian refugees has been to reinforce the (dysfunctional) political status quo.

Meanwhile, within Lebanon, three main political narratives have emerged regarding how to deal with the Syrian refugee crisis. The Christian political elite argue mainly that Lebanon has had its fair share of Palestinian refugees and that the long-term presence of Syrian refugees will alter the demographic balance in favor of Muslims and will thereby destabilize the country. The Sunni political elite have employed charitable networks in aiding Syrian refugees but have instilled the fear that many of the refugees are pro-Assad and should thus be regarded with caution. The Shiite political discourse has been weary of the rise of Islamic State popularity among refugees and has opted for a quiet stance in welcoming selected families into Shiite-dominated regions in the South.

Yet, despite their distinct motivations and divergent political narratives, the Lebanese political elite as a whole appear to have left the task of responding to the needs of Syrian refugees largely to local and international nongovernmental organizations, warning against the use of terms such as “cohesion” and “integration” but nonetheless welcoming any efforts aimed at socio-economic development for both refugees and Lebanese host communities.[7]

Lebanon, a small country on the Mediterranean with its own checkered history of internal conflict and civil wars, is now home to more than 1.1 million Syrians.[8] In fact, Lebanon now hosts the highest number of refugees per capita in the world, with Syrians now making up about one in four of the population.[9] At present, refugees reside in informal settlements concentrated mainly in the Bekaa, North, and South of Lebanon.

Syrians arrived in mass numbers to already impoverished communities in these regions. In fact, 86 percent of Syrian refugees live in communities where almost 70 percent of Lebanese were living on less than $4 a day.[10] By the end of 2014, it was estimated that approximately 170,000 additional Lebanese were pushed into poverty. Also in 2014, unemployment rate doubled to above 20 percent, mainly among unskilled youth, as a result of poor governance and management of the crisis.[11] Additionally, 41 percent of the total displaced population was living in substandard shelter.[12] Competition over resources at the local level has increased the cost of living, driving an additional 30 percent of refugees beneath the poverty line in 2015.[13]

Lebanon is not a State Party to the 1951 Convention relating to the Status of Refugees. Nor has Lebanon signed the 1967 Protocol of the same name. Furthermore, the government of Lebanon has made it clear that it does not regard Syrians as refugees but rather as temporarily displaced persons. Therefore, in the government’s eyes, Lebanon is not a country of asylum, as it is not a final destination for refugees, or a country of resettlement. However, Lebanese civil society organizations have made a substantial contribution to the humanitarian response—helping ensure the provision of food, shelter, and other basic services to refugees arriving in informal settlements.

The first is evident in Lebanon’s social and cultural solidarity with the refugees. Despite socio-cultural difference and tensions between Syrians and Lebanese, broadly speaking Syrians were shown unfaltering solidarity and support by the Lebanese. Juxtaposed with discriminatory state policies forbidding Syrians from working, curfews imposed by municipalities, and cultural stereotyping of children in schools, grassroots communities provided a safe haven for thousands of families fleeing conflict.[14]

Lebanese civil society organizations comprise the third cornerstone of community resilience. A plethora of nongovernmental organizations have rushed to focus their efforts on humanitarian relief and socio-economic development at the local level, in collaboration with municipalities. Lebanese NGOs and municipalities have displayed a strong commitment to mitigating potential conflicts and providing support for health and educational services in vulnerable communities across Lebanon.[16]

The Syrian refugee crisis has prompted a focus on short-term solutions—aimed at helping Lebanon address the needs of both impoverished host communities and of refugees—but at the cost of reducing the prospects for reform.

By enshrining weak state institutions, the power-sharing formula empowers political elite— outside of the role of the state—to devise policies or non-policies at their own whim. The arrival of Syrian refugees to Europe will continue to bolster the resilience model as opposed to the reform approach in the case of Lebanon. European member states, still in shock following the Paris terrorist bombings and the New Year’s Eve sexual harassment events in Cologne, are likely to opt to continue supporting Lebanon and other frontline states in hosting Syrian refugees. Indirectly, this will likely make it that much more difficult for Lebanon to adopt the political reforms it so desperately needs. In that sense, the power-sharing system in Lebanon is undergoing a form of upgrading similar to Arab governments in the 1990s that underwent authoritarian upgrading—some of which were subsequently toppled by force.