Syrians respond to COVID-19 with renewed volunteer and community efforts 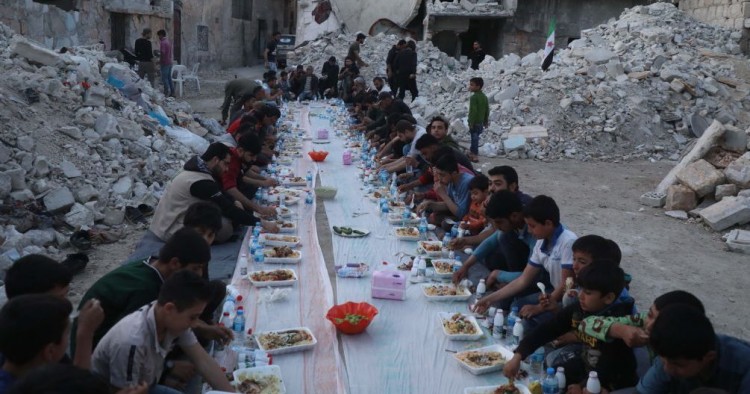 With an economy already on the brink of collapse and a shocking devaluation of the Syrian pound — hitting 3,175 pounds to the dollar earlier this month — the COVID-19 pandemic has come at an exceptionally dangerous time in Syria.

Beyond the health and humanitarian consequences, the pandemic has further crippled the Syrian economy and shut down parts of the food supply chain. The UN World Food Programme recently announced that food prices in the country were 115 percent higher than just a year ago. In order to stave off hunger, Syrians are increasingly turning to their contacts and families abroad to send remittances. The more desperate are reportedly selling their organs.

“We Want to Live”

In Sweida, economic woes led to the protest movement Bidna Na’aesh (“We Want to Live”) at the start of the year, following the suicide of a deeply impoverished man who threw himself from President’s Bridge in Damascus. The movement’s singular demand was dignity, with improved quality of life and security, and it rejected both political and sectarian divisions. Indeed, the protests were made famous by individuals holding pieces of bread with the words Bidna Na’aesh written on them, a wordplay on ‘aesh, meaning both “bread” (in the Egyptian dialect) and “to live.” While these protests in Sweida were short-lived, they have recently been reinvigorated as the economic crisis has only deepened.

Similarly, in southern Syria, particularly in “reconciled” communities, unemployment is at an all-time high. In the years prior to the regime retaking control of the south, millions of dollars in international humanitarian and stabilization funds flowed into the region each month. Now deprived of these funds, these areas face exceptionally difficult times.

With a near decade-long conflict, extreme corruption, an economic crisis in neighboring Lebanon, and the implementation of the Caesar Act sanctions, Syria was already teetering toward economic collapse. The pandemic and its consequent restrictions on business hours of operation and limits on movement have created the perfect economic storm with a much deeper (and more sudden) devaluation of the Syrian pound and an unprecedented spike in prices. In the fertile western countryside of Daraa, for example, the 12-hour curfew and increased prices of agricultural supplies and fuel forced farmers to stay home, drastically impacting food supplies and leading to further poverty and hunger.

Yet an unexpected outcome of all this has been a reinvigorated civil society and volunteer movement reminiscent of the early days of the 2011 revolution. Prior to the very recent protests in Sweida, Daraa, Idlib, and Deir ez-Zor, many communities throughout Syria at the start of the pandemic began looking inwards to respond to the severe poverty and hunger in their communities given the massive gaps in governance and services.

In southern Syria, including both Daraa and Sweida provinces, in the absence of many state security apparatuses, volunteers came together to launch wide-reaching initiatives in response to the pandemic, financing them by tapping into expat and refugee communities based in the Gulf, Latin America, Europe, and elsewhere. Activities ranged from advocacy and awareness-raising to campaigns to sterilize public areas, humanitarian initiatives, and debt forgiveness. While some of these initiatives started small, they grew in size and became more diverse as communities were reassured by the government’s non-interference.

In the towns of Busra al-Sham, Umm Waled, Tafas, Naseeb, Maaraba, and Nawa in western Daraa, volunteer teams oversaw general awareness-raising initiatives, sanitation campaigns, and efforts to meet basic health and food needs in a relatively centralized and organized manner. Yet initiatives and campaigns were not limited to these towns. Indeed, throughout Daraa, individuals and groups came together to support their communities.

In al-Harra, Tsil, Nawa, al-Jiza, Saida, Jasem, Busra al-Sham, Maaraba, and Tafas, for example, bread was offered for free for the entire month of Ramadan. Individuals, either self-funded or through remittances, would cover the cost of flour and labor, and bakeries would then produce and distribute the bread to residents in the area. In Tsil, Daraa al-Balad, Da’el, and Daraa al-Medina, clothes were distributed to orphans and the needy for Eid.

In Tafas, al-Mzareeb, Qusayr, Saham al-Jolan, Jaleen, al-Heet, and al-Yadooda residents distributed food and health care baskets and raised awareness about the pandemic and the general sterilization of public areas. In addition, individuals and tribes in Daraa distributed monetary aid. In Busra al-Sham, for example, over 100 million Syrian pounds were distributed to the needy in one month alone. In Tsil, each member of one particular tribe was given 25,000 pounds during Ramadan.

Sweida saw initiatives comparable to those in Daraa, including awareness-raising and advocacy campaigns, distribution of health care and food baskets, monetary aid, and the sterilization of public areas, funded mostly through remittances but also by community members. Like in Daraa, volunteer committees were formed in Shahba, Salkhad, and Sweida al-Medina to help centralize the collection and distribution of funds and identify initiatives to address community needs.

In addition to the above initiatives, volunteers in Sweida also monitored food prices, distributed vegetables to the disabled, and sold produce at wholesale prices. During Ramadan, for example, volunteers from Shahba would buy fruits and vegetables at a wholesale food bazaar in Damascus and sell them at the same wholesale prices, assuming the costs of transportation and taking no profit. Several initiatives also covered residents’ debts at pharmacies and grocery stores in parts of Sweida and Daraa. Indeed, the sense of volunteerism went beyond addressing the immediate needs of residents to supporting general community safety and well-being. A local organization in Sweida, for example, through the help of volunteers, began a campaign to remove flammable shrubs to prevent wildfires similar to the deadly fires that spread last summer.

Other areas and communities throughout Syria saw a similar reinvigoration of volunteerism, civil-society activities, and general community philanthropy, albeit sometimes less organized or widespread. In Salamiyeh, Hama governate, a campaign termed “you are guests this month” covered rent for a month for some residents. Another campaign launched by grocery store owners, with the slogan “take what you need and think of others,” ensured that stores did not increase their prices and encouraged residents to buy as much as they needed while being considerate of others. Some stores and bakeries even gave away their goods for free.

In the Palestinian camp of al-Aideen in Homs, an initiative by both expats and locals collected and distributed monetary support to the needy. Free bread was given out throughout Ramadan, as were food and health care baskets. Individuals similarly paid off residents’ debts at some grocery stores and pharmacies, and Eid clothes were provided to orphan children.

In parts of northeast Syria, including Raqqa and Qamishli, doctors publicly posted their phone and WhatsApp numbers for residents to contact for medical advice. In northwest Syria, approximately 3,000 volunteers tied to community groups, initiatives, and organizations came together as part of a “campaign against corona” to unify public health messaging, raise general awareness on the pandemic, and try to enforce the World Health Organization recommendations.

While these initiatives are mere drops in the bucket of what is needed to offset the tremendous poverty and hunger in Syria, they have once again exhibited Syrians’ incredible resilience in the most difficult of circumstances. Even as COVID-19 restrictions are loosening in Syria, many of these initiatives have continued. Indeed, it is no surprise that the areas that have been the most vigorous in responding to the pandemic are now the ones most actively protesting economic woes and demanding the fall of the regime. Yet without long-term and sustainable support, in an ever-worsening economy, only time will tell how long these initiatives will last.

Reem Salahi is a non-resident scholar with the Middle East Institute’s Syria Program, a technical advisor to Adam Smith International’s Syria governance project, and an advisor to the International Commission on Missing Person’s Syria/MENA Program. The views expressed in this piece are her own.