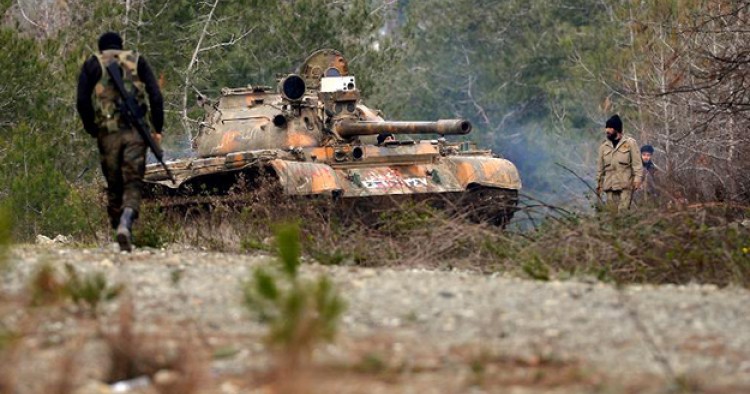 Last month, when Secretary of State John Kerry sought to dispel the mounting skepticism of lawmakers over the advisability of launching punitive air strikes against the regime of President Bashar al-Assad, he portrayed the rebel fighters in the Western and Gulf-backed Free Syrian Army (FSA) as pluralistic and democratic, distinguishing them from jihadi groups and hard-line Islamists.[1]

For many in the press corps reporting on the Syrian civil war the characterization of rebel forces as largely democratic in ideology and dedicated to inclusivity and pluralism was questionable. To the contrary, what has become noticeable is that as the conflict has prolonged in Syria it has become more sectarian and more religious- based, with hard-liners growing in number and influence, whether jihadi or Islamist.[2]

Indeed, not long after Kerry’s testimony 13 rebel factions—including some of the biggest and most effective brigades in the Syrian insurgency—tarnished the picture of a predominantly secularist and democratic rebellion by announcing their rejection of the Western-backed political leadership of the Syrian National Coalition (SNC) and the formation of a new Islamic bloc.

Led by the mainly Aleppo-based brigade Liwa al-Tawhid, the 13 factions, including the al-Qa`ida affiliate Jabhat al-Nusra, pledged to fight under an “Islamic framework” based on “the rule of Sharia”—an apparent rejection of Western-style democracy.

Alarmingly, from a Western perspective, the new alliance saw a substantial core of the FSA’s middle-of-the-road Islamists, such as Liwa al-Islam and Suqur al-Sham, defecting, bringing them into a formal association for the first time with hard-line Salafi/Islamist brigades such as Harakat Ahrar al-Sham al-Islamiyya.

On the military side, the defection of four of its biggest brigades will seriously deplete the strength of the FSA, undermining its military reach and the authority of its overall military head, Gen. Salim Idris, a defector from the Syrian army who has struggled to unite the rebellion’s fractious insurgents under one command since his appointment earlier this year.

The formation of the Islamic bloc augurs badly for the strengthening of a secular center within the insurgency. For military analysts like IHS Jane’s Charles Lister it underlines “what has been clear to many for some time: that the SNC/SMC [Syrian National Coalition/Supreme Military Council] has represented an opposition leadership far removed from what has become an increasingly Islamist-led insurgency.”[3]

It is a development also not lost on many noncombatants in Syria and among those who have fled to become refugees in neighboring countries. There has been a noticeable upsurge among refugees questioning the direction of the uprising and worrying about what might replace the regime of Assad. Noticeably pro-rebellion Syrian civilians, especially those from the bigger urban centers, have been bewailing the hard-line Islamist trend among rebel fighters, fearing that the uprising has moved away from its origins.

Mazen, a 25-year-old father of one from the war-battered Damascus suburb of Jobar, conceded to this author that he would settle for a political settlement—even one that included Assad remaining in power. “I look at Iraq and Libya and see all the trouble they had after,” he says. “If one side or another wins this war, the winning side will reap revenge; there will be a lot more killing.” Mazen’s biggest worry is that a hard-line Islamist government will replace the secularism of Assad.  “I supported the rebellion but now there are jihadists and others I have nothing in common with. I fear them more than Assad even.”[4]

More recently, divisions and tensions within the remaining contingents of the Syrian National Coalition have become increasingly apparent. On October 13 a group within the SNC, the National Council, announced that it would not attend Western and Russian sponsored peace talks in Geneva, saying that it wasn’t prepared to be involved in any discussions with the regime before Assad had fallen. The group’s president, George Sabra, warned that if the SNC participated it would quit—a worrying threat given that his group is the largest bloc within the coalition.[5]

The threat could well derail Russian and U.S. efforts to find a political solution to the conflict—although Geneva talks already looked remote before Sabra’s declaration, especially in light of the fracture of rebel forces and with the leaders of the new Islamist bloc dead set against peace talks.

Can the rebels be “moderated?” Is there anything the West can do to boost the fortunes of the more secular rebels, or those Islamists better disposed to democracy and pluralism? Some FSA commanders say that more weapons and money to pay their fighters would help.

But most terrorism analysts, including former government officials, remain pessimistic. “There is little the West can do to induce greater moderation among the Syrian rebels,” says Paul Pillar, a retired CIA officer and now a visiting professor at Georgetown University.[6]  It is a view shared by Michael Rubin of the Washington, D.C.-based think tank, the American Enterprise Institute. “The idea that Syrian rebels can be moderated is a Western fantasy,” he says. “The problem with the debate right now is that those seeking to arm the Syrian rebels are in denial about what they have become.”[7]

Instead, positive change must come from the rebels themselves, however much they are floundering when it comes to unity and future strategy. Yezid Sayigh, a senior associate at the Carnegie Endowment’s Middle East Center, criticizes rebels for their failure to develop a political plan capable of enticing Assad supporters to change sides or to push the regime to the negotiation table.

He faults rebel leaders for not seeking to reassure Syrians still backing the regime about what would follow Assad’s fall. “A negotiating framework is important for political purposes to persuade people around the regime and its core constituency in the army, in the Alawi community, and so on that they do have a life beyond Assad, that they do have an alternative to being stuck there fighting for him.”

Sayigh believes that the rebels need to develop a detailed plan for the transfer of power and to sit down with army generals, Baath party leaders, and Alawi elders and offer to work out modalities, particularly what it actually means to have a transitional government. “They must assure the parties that this is not going to turn into a wholesale purge or the dismissal of tens or hundreds of thousands of people whose livelihoods rely on government employment,” he says.[8]

[1] Under questioning by opponents of U.S. military action, Kerry pushed back on the idea that rebels subscribe to a hard-line religious viewpoint. He told a hearing of the Senate Foreign Relations Committee: “The opposition has increasingly become more defined by its moderation, more defined by the breadth of its membership, and more defined by its adherence to some, you know, democratic process and to an all-inclusive, minority-protecting constitution, which will be broad-based and secular with respect to the future of Syria.” Transcript testimony of the Secretary of State John Kerry before the Senate Foreign Relations Committee, 3 September 2013, http://articles.washingtonpost.com/2013-09-03/politics/41716327_1_secretary-hagel-military-force-joint-chiefs.

[3] Lister believes that if the new alliance holds, it will “likely prove the most significant turning point in the evolution of Syria’s anti-government insurgency to date.” He adds: “The SNC has long been accused of retaining minimal on-the-ground control of insurgent groups technically under its command, and this public renunciation of its leadership and its political foundations will likely prove extremely damaging for its long-term role inside Syria. The group’s 13 signatories currently play the lead roles in insurgent theaters across Syria, particularly throughout the north, in Homs, Damascus, and as far south as al-Quneitra Governorate.” Email exchange between author and Charles Lister, 25 September 2013.

[6] Pillar adds: “There is often talk about trying to increase the relative standing and influence of more moderate opposition groups by giving aid to properly ‘vetted’ moderates.  This overlooks the extent to which both men and material tends to move from one group to another.  Moreover, there usually is not lasting gratitude for outside assistance.” Email Exchange between author and Paul Pillar, 25 September 2013.