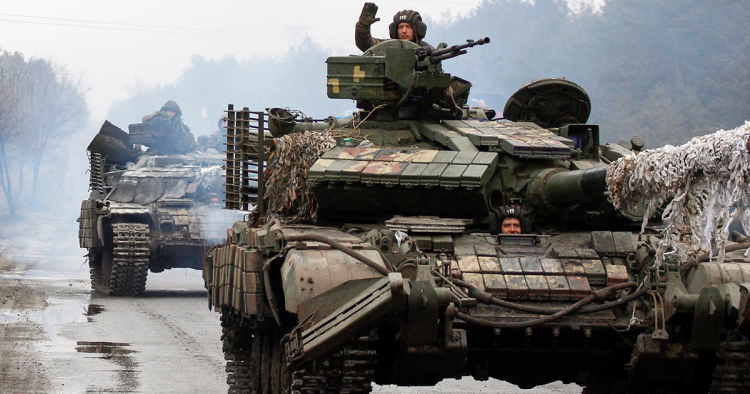 As Russia pushes on with its relentless invasion of Ukraine, Damascus has done more than toe the proverbial Kremlin line — it has shown complete solidarity with its superpower patron.

Moscow was eager to secure its ally’s support in the lead-up to the offensive, with Russian Defense Minister Sergei Shoigu visiting Damascus on Feb. 15, just a week before the outbreak of war.

Shoigu met with Syrian President Bashar al-Assad to discuss “military-technical cooperation as part of the joint fight against terrorism.” According to the official readout, he also inspected the airbase at Hemeimeem as well as the port in Tartus and oversaw military drills.

At the same time, Moscow deployed long-range nuclear-capable bombers and fighter jets carrying hypersonic missiles in Syria, enabling Russia to more effectively deter Western involvement in Ukraine or even carry out attacks in the event of an escalation.

On Feb. 21, just three days before the full-scale invasion of Ukraine, Syrian Foreign Minister Faisal Meqdad met with his Russian counterpart, Sergey Lavrov, in Moscow. During the meeting, Meqdad supported Russia’s decision to recognize the republics of Luhansk and Donetsk and promised cooperation with the breakaway territories. Meqdad went on to denounce the "campaign of hypocrisy, lies, and deception waged by the West" against Russia.

According to the Syrian Presidency, Russian President Vladimir Putin’s decision — condemned around the globe — to recognize Luhansk and Donetsk and to invade Ukraine was discussed with Damascus “two months in advance" of recent developments.

Syrian MP Khaled Abboud made the stunning claim on state-run Ekhbariyeh Television that Syria had given Russia the green light to start the offensive: “Tomorrow, history will say that the Russian Minister of Defense was in Damascus and met with President Bashar al-Assad. He didn’t come to walk around Damascus or tell Assad ‘Putin sends his regards’ … he [Shoigu] was told by Assad ‘tawaklo’ [“go ahead”].” Syrian opposition activists, in response, posted pictures of captured Russian fighter jet pilots with the caption “how it finished after tawaklo.”

On Feb. 24, the first day of the Russian offensive, Putin was quick to call Assad, who remarked to the Kremlin leader that, “Western nations bear responsibility for the chaos and bloodshed.”

Unsurprisingly, on that same day, Russia Today’s Arabic station live-streamed two correspondents, one based at Hemeimeem airbase in Latakia and the other in Damascus, who reported on Syria’s enthusiasm for Russia’s military actions in Ukraine.

Syria was one of just five countries that voted against a United Nations draft resolution condemning Russia’s invasion of Ukraine — 141 voted in favor and 35 abstained.

The Syrian Chamber of Industry, meanwhile, built a massive billboard showing Putin in military attire next to the words “Victory for Russia” and placed it in one of the main squares of the Syrian capital. In Jableh, an Assad stronghold on the Mediterranean coast, civilians supportive of Russia marked their homes and cars with the letter Z (short for Za pobedu, “For Victory”) in white tape. This letter, with which the Russian military marks its armor to avoid confusion with similar-looking Ukrainian equipment on the battlefield, has been taken up as a symbol by the Kremlin’s partisans.

Hand-in-glove coordination between Moscow and Damascus shows that Syria remains a top priority for Russia. Alexey Khlebnikov, a Middle East expert at the Russian International Affairs Council, averred, “The current moment can hardly change Russia’s overall approach to Syria. It’s been a priority for Russia since 2015. However, one cannot compare the importance of Ukraine and Russia’s immediate neighborhood to Syria. We mention military bases; these are for 49 years [the length of Russia’s lease on Tartus port]. Russia is set to stay there.”

The fallout from Ukraine will be brutal

No matter Assad’s stance, the consequences of Russia’s war in Ukraine will bear down hard on Syria.

To address the immediate economic fallout from the Ukraine war, Syrian ministers held meetings with merchants to discuss extending the duration of import permits for industrialists.

Meanwhile, the Syrian government banned the export of essential foodstuffs in light of what it described as the “current global reality.” While this “reality” clearly refers to the crisis in Ukraine, Syria’s general economic situation has been desperate for several years.

The country’s wheat production declined by over 60% in 2021. Because of this and other factors, 12.4 million Syrians (almost 60% of the population) currently find themselves “food insecure.” Now that fighting in Ukraine has cut off as much as 30% of global wheat exports, food prices are set to soar and the suffering of Syrians will only worsen.

The war-torn country has had to endure a nightmarish winter of shortages and cuts that go far beyond just basic foodstuffs. In January, the government held a five-day public holiday for the purpose of “saving as much energy as possible." The harsh Syrian winter has seen babies freeze to death in displacement camps in Idlib.

The exchange rate of the Syrian pound has skyrocketed to an estimated 3,750 SYP to the U.S. dollar, an unprecedented increase from the pre-war rate of 50 SYP to the dollar.

On the military side, reports of Syrians fighting with Russia are premature; however, given Moscow’s increasing losses, Syrians make for attractive, low-cost mercenaries in Russia’s eyes.

At the height of Syrian civil war, Russia supported auxiliary units and militias, such as Liwa al-Quds (al-Quds Brigade) and Suqur al-Sahara (Desert Hawks), that fought alongside the Syrian Armed Forces. If need be, Russia could quickly recruit members of these groups to fight in Ukraine. Given the misery of the Syrian economy, there would be no shortage of combat-hardened men of military age willing to put their lives on the line for a modicum of material gain.

Russia’s decision to intervene militarily in Syria on Sept. 30, 2015, was Moscow’s first significant engagement in the Middle East for decades.

The war in Ukraine not only impacts Syria, but the two conflicts are intertwined. In fact, Syria has become a constant reference point for analysis of Russia’s attack on Ukraine. Sasha Ghosh-Siminoff, executive director of People Demand Change, told MEI that the Syria intervention facilitated the Russian president’s aggressiveness.

“Vladimir Putin felt he had a green light and was encouraged to employ a much riskier strategy — such as starting the war in the Donbas region — that he would not have considered feasible before the Syrian crisis,” he said.

“The Syrian conflict has provided a perverse training ground for the Russians to experiment with different types of warfare (weapons systems, disinformation, mercenaries, etc.) against a civilian population with minimal consequences of any kind from the international community,” Ghosh-Siminoff continued, adding that, “I think the Russians have learned much from their time in Syria in terms of confronting and fighting irregular warfare and using both political and military power to subdue and co-opt local civilian populations and state-controlled apparatuses. All of this experience will be useful to Russia as they attempt to occupy Ukraine."

Syria provided Russia with a theater for operations and weapons testing, in addition to serving as a military base for both their airpower and navy in a strategic location on the Mediterranean and in the Middle East.

Going forward, Syria will likely continue to struggle economically due to the consequences of the war. Despite the suffering and hardship this will no doubt create for Syrians, for the foreseeable future, Damascus’ strategy is likely to remain sticking as closely as possible to Moscow.

Danny Makki is an analyst covering the internal dynamics of the conflict in Syria and a non-resident scholar with MEI's Syria Program. He specializes in Syria’s relations with Russia and Iran. The views expressed in this piece are his own.