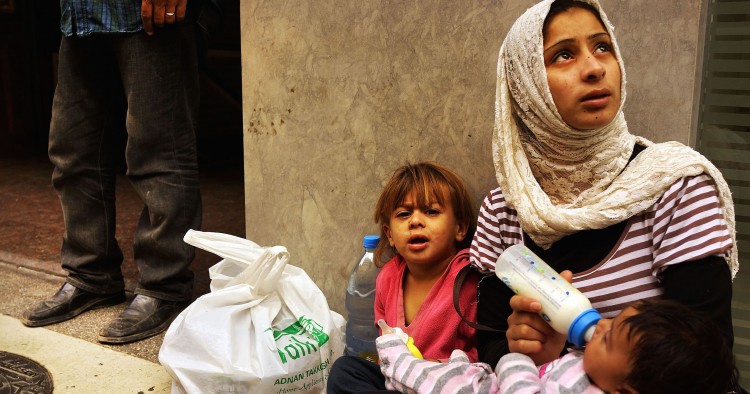 An old Damascene saying goes, “Half of 1000 is 500.” It is usually reserved for sarcastically stating the obvious or bringing someone back to reality. This isn’t always easy in government-controlled Syria, as reality can be distorted, but it has become clear that problems are emerging that can no longer be justified by the excuse of war.

More than 80 percent of people in Syria today live below the poverty line. The country has an unemployment rate of at least 55 percent, and jobs are increasingly hard to find. The conflict has taken a heavy socio-economic toll on the population, and that is now the catalyst for growing discontent in loyalist ranks. As the military begins a slow-but-steady demobilization process, reintegrating soldiers into civilian life and creating jobs is proving difficult for the government.

One fighter, who only agreed to be identified as “Salem,” belonged to army reservist group 201, which was released over three months ago after seven years of continuous service. Salem complained, “We had been promised jobs by the government, but we are still waiting. Even if we get jobs as promised, the salary is too low for us to live well.”

The war has set the country’s development back by decades. The World Bank estimates that around $200 billion will be needed to rebuild Syria’s destroyed cities alone. According to Kamal Alam, a Syria analyst at the Royal United Service Institute, “This really means that Syria is suffering. Despite local traders and small to medium-sized businesses trading regionally with Iraq and Lebanon, it has not helped poverty alleviation and unemployment. With the massive destruction and economic instability, Syrians still struggle to make ends meet in government-controlled areas.”

Syria ranks fourth on the list of the world’s most corrupt countries, and getting a job in Damascus is increasingly difficult without wasta—nepotism or clout. One disillusioned loyalist wrote on his Facebook account, “Without wasta in this country, we might as well just all stop living.”

Poor government services, excessive red tape, and a stagnant economy have also fueled resentment among the population. In 2017, actor Bassam Kousa criticized government departments, calling them “institutions solely for collecting funds.” Torrential rain in Damascus last October led to large-scale flooding as the poorly maintained sewage system broke down, blocking major roads for days. Corruption allegations were leveled at Damascus Governorate, which is responsible for maintenance, and activist Ramez Salha remarked, “Most of the roads between the people and the government have also been cut off, until we reach a final direction.”

Prior to 2011, up to 80 percent of the Syrian economy was dependent on small to medium-sized businesses. Now, the balance has shifted and most of Syria’s wealth is controlled by business networks linked to controversial figures such as Rami Makhlouf and Samer al-Foz, who have become major players in the economy, with holdings ranging from sugar refining and steel to pharmaceuticals and real estate.

While the majority of the population struggles, the country’s business elite continue to grow their empires, establishing a questionable monopoly over an estimated 75 percent of the economy. For businessmen like al-Foz, the war economy has its upsides, such as a lack of competition. He told The Wall Street Journal, “I worked for four years with no competition at all.”

This growing concentration of wealth comes at a time when the currency has been under severe stress, with the Syrian pound depreciating by over 90 percent to around 512 to the dollar as of November 2018, against a record low of 44 in 2010. Prices have gone up tenfold, but salaries have essentially stayed the same.

Syria’s new tycoons have sought not only to protect their gains, but also to build public support through various initiatives. For example, Syria-Tel, one of the main companies controlled by Makhlouf, actually spent most of the crisis hiring more workers, reaching around 3500. The firm, which is one of just two telecoms providers in Syria, brought on new staff as a way of demonstrating its loyalty and showing it was “business as usual” in the country.

The war created new opportunities for profit as well, and looting and pillaging became widespread. Stolen metals like copper and other raw materials found their way into the hands of companies controlled by the elite. Stripped metals and looted materials were allegedly sold to companies such as Syria Steel, run by the Hamsho group, and then melted down and used to make weapons in local factories. The looting of areas taken back by the government has been the cause of considerable anger and frustration. Aleppo-based journalist Rida al-Basha described the looting as “shameful” and “embarrassing.”

The war economy has created new fortunes and enabled new members to join the country’s elite, such as Hossam Qaterji, who gained notoriety as a middleman trading oil and cereals in a triangle between the Kurds, ISIS, and the Syrian government. He allegedly had under-the-table dealings with ISIS in northeast Syria and facilitated the purchase of wheat to feed trapped civilians in Deir el-Zour, selling it to the Syrian government at a considerable markup. He was later elected to the Syrian parliament in 2016.

The money that Syria’s elites earn this way is often then ploughed back into the war effort to fund militias fighting for the government. For example, al-Foz has been accused of funding a paramilitary force affiliated with Syrian Military Intelligence, the Quwwat Dir‘ al-Amn al-Askari (Military Security Shield Forces). Other militia groups such as al-Bustan Asso­ciation are thought to have strong funding links to Makhlouf.

As anger at the current state of affairs grows and public opinion becomes more heated, there have been signs that the government may take action—whether to promote the interests of the elites or to demonstrate its willingness to fight corruption. For instance, oil trader and militia commander Ayman Jaber was placed under house arrest in Latakia in February 2017 amid allegations of corruption, despite having a private militia of 12,000 troops known as the Desert Hawks and Russian citizenship. Also in 2017, the Ghreiwati family, one of the most wealthy and influential in the country, had their assets seized by the Syrian government.

The sheer scale of the wealth divide in government-held parts of Syria is unsustainable in the long term. As long as jobs are scarce and salaries insufficient, anger toward the government will intensify. Now that armed conflict in most provinces of the country has ended, the war is no longer a catch-all excuse for the government. All domestic affairs and government actions will be under a magnifying glass as loyalist sections of the population expect tangible improvements in their quality of life and a reduction in endemic corruption. As more focus is drawn to the non-political elements of the conflict, dissent in government-controlled areas will likely continue to increase until Syrians’ lives improve and the distribution of wealth becomes more equitable.