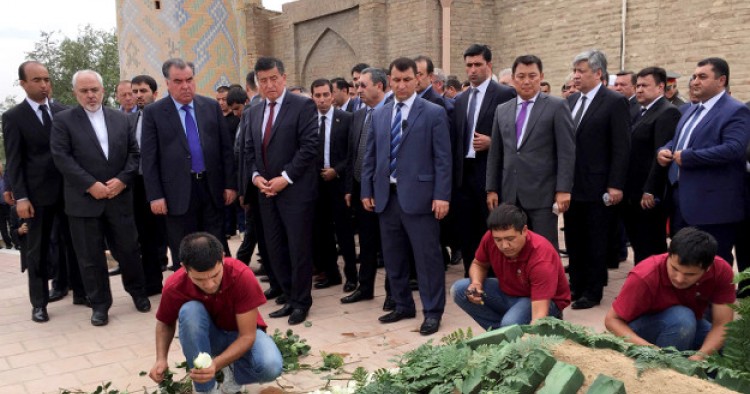 Tajikistan has accused Iran of having played a subversive role in the country’s civil war in the 1990s by sending terrorists to the Central Asian republic, the latest sign of deteriorating relations between the two countries. On Wednesday, Tajikistan’s state-run TV aired a documentary that included confessions of three Tajik citizens who had been involved in the assassinations of Tajik politicians and an attack against a Russian military base in the country. The individuals alleged that Tehran had provided funding and training for their terrorist actions. The Iranian embassy in Dushanbe was quick to reject the allegations. “The Iranian ambassador is outside Tajikistan now. But the embassy will soon probe the case. We want to know where these lies and allegations came from and what are their motives,” a statement by the Iranian embassy said. Tajikistan’s Interior Ministry has reportedly played a role in producing the documentary.

Comment: Relations between Tehran and Dushanbe have soured in recent years. On June 30, the Iranian embassy in Tajikistan shut down its economic and cultural offices in northern parts of the country after Tajik authorities ordered the directors of Iranian government organizations in Khujand, the second-largest city in Tajikistan, to suspend their activities in the north. The Tajik government has not provide detailed explanation for the latest government crackdown on Iranian activities in the country. Over the past two years, several Iranian government organizations and charities have also been forced to suspend their activities in the Tajik capital of Dushanbe – including the Imam Khomeini Relief Committee, the Cultural Center of the Islamic Republic of Iran, and a hospital jointly run by the Tajik government and the Red Crescent Society of the Islamic Republic of Iran.

Relations between the two countries took a nosedive in December 2015 when the Iranian government invited Muhiddin Kabiri, a Tajik opposition leader living in exile, to attend the annual “International Islamic Unity Conference” in Tehran as a “special guest.” In a rather provocative act, Iran’s Supreme Leader Ali Khamenei met with Kabiri and the state-run media publicized the meeting. Kabiri is the leader of the Islamic Renaissance Party of Tajikistan (I.R.P.T.), a political party outlawed by the Tajik government.

By doing so, Tehran perhaps wanted to send a veiled threat to the Tajik government, which was seeking closer ties with Iran’s regional rival Saudi Arabia. Since then, diplomatic ties between Tajikistan and Iran have been on a downward spiral. The Tajik government has also restricted the activities of some Iranian companies and businesses in the country.

So far, multiple bilateral diplomatic engagements have yielded little result, and Tehran has not responded positively to Dushanbe’s request to designate the I.R.P.T. as a terrorist organization. According to the Russian press, Tajikistan has opposed Iran’s accession to the Shanghai Cooperation Organization (S.C.O.), where Iran has an observer status while Tajikistan holds veto rights as a founding member. In April, Russian President Putin’s special envoy to S.C.O. said while Moscow supports Iran becoming a full-fledged S.C.O. member, some other members of the organization oppose Iran’s accession – without naming a specific country.