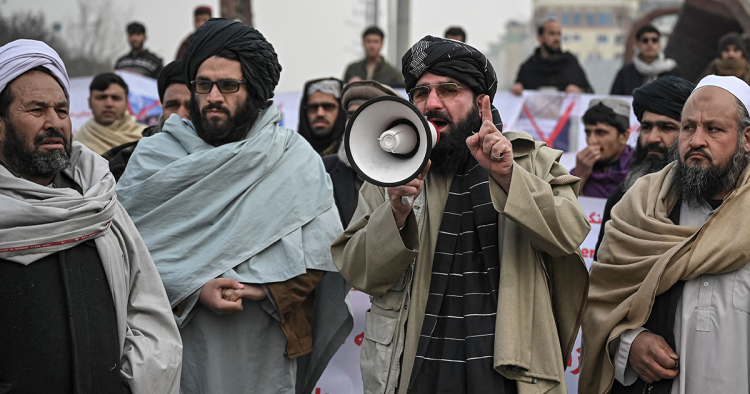 After a grueling 20-year campaign, America concluded its war in Afghanistan where it started: with the Taliban in charge. But this isn’t your father’s Taliban. In recognition of their need for a firmer ideological base and their desire to establish a purely Islamic system, the Taliban rulers are gradually putting together the framework for their new ideological state. They are enacting three closely intertwined ideological initiatives in order to solidify their rule: fleshing out a state religious ideology, burnishing their “originalist” religious credentials, and channeling Afghan nationalism into religious nationalism. These ongoing efforts, which revolve around the Taliban’s Islamism, provide a preview of how the new rulers intend to interact with temporal political realities by provoking religious reform in order to rule Afghanistan.

Since their founding in 1994, the Taliban have impressively maintained their ideological promise: to take over Afghanistan and remold it. The broad contours of the Taliban’s promise were simple: We are devout Muslims who fight for God and oppose corrupt leaders — whether they are former Afghan communists, jihadi leaders, or educated technocrats — and we have an alternative vision for a new Afghanistan. The Taliban’s brilliance has been in their steadfast refusal to stray from their promise, weathering all kinds of pressures and avoiding ideological compromise. The remarkable consistency of their ideological objectives distinguished them from all other Afghan political and Islamic groups.

The Taliban’s founders understood that unless they preserved their basic promise, their movement would become irrelevant. The Taliban's Islamism has since allowed the group to evolve into a different ideological and business enterprise. The Taliban increasingly commercialized their ideology as a social and political project to bring back “original” Islam to reorganize Afghan society. Meanwhile, this commercialization has also been intended to accommodate the Taliban’s own ideological variants. To do so, the new rulers are today on an organized march on three major fronts to cement their rule.

First, the Taliban rulers are setting the foundational rules to transform their religious movement into a permanent ideology: Talibanism. This hybrid code dictates the Taliban’s worldview, which views society as a competition between godliness and worldliness. Historically, as Sunni Muslims, the Taliban’s main reference point has been the Deobandi school, a variant of Hanafi Islam founded in the mid-19th century. While most Afghans follow Sunni Hanafi Islam, Talibanism is a shift away from traditional Deobandism and toward a more tailored and unwritten mixture of puritanical beliefs wrapped in Islamic sharia.

Talibanism commands that Islam dictate every aspect of daily life and considers Afghan society insufficiently Islamic and in need of re-Islamization — either by invitation or coercion. It rejects all forms of republican rule because it follows human perversion. It makes a clear distinction between its devotees, the mujahideen, and others — particularly the anti-Taliban Afghans and modernizers — who they consider hypocrites (munafiqeen). Such distinctions have historic roots in early Islamic history, where Arab rulers described non-Arabs as Ajam, a pejorative expression Muslim rulers used to assert their Islamic superiority. Talibanism also makes a marked distinction between Islamic law and man-made laws, deeming the latter immoral because they follow the whims of corrupt humans. By re-Islamizing Afghan society consistent with the Taliban founder's promise, Talibanism, therefore, wants to make Afghanistan great again.

Second, the Taliban rulers are revalidating themselves as a vanguard for a true Islamic leadership of Afghanistan. This Taliban recasting is broadly akin to those of other Islamic revivalists and ideological revolutionaries such as Hassan al-Banna, the founder of the Muslim Brotherhood; Sayyid Qutb, the intellectual inspiration behind violent political jihadism; and Abul A'la al-Maududi, the founder of Jama’at-e-Islami in Pakistan who introduced the notion of vanguardism to Islamism. While there are many Taliban variants, a cluster of religious clerics effectively serves as the movement’s nerve center. Unlike the Taliban’s pragmatists, these clerics are “originalists,” who view Islam as the tip of the spear and the Quran as their constitution. They operate through a loose set of policy action documents, known as Dastur. It is this select group who make sensitive Taliban decisions — including nearly all ideological appointments — through an inner religious shura. They have already placed dozens of clerics in important roles across the country, including in primary and appellate courts.

What’s more, this jihadi fraternity believes that power is never willingly relinquished and must be taken by force. To understand their ideological framing, it is instructive to look back at the historical evolution of Islam, which was presumably spread by the sword. For that reason, the Taliban’s originalists and their devotees take the centrality of the proverbial Islamic sword seriously. They consider themselves as soldiers in God’s army, thus rationalizing their jihadism as virtuous and their violence as righteous. They believe that the recognition of a Taliban state springs from their own community of followers and fighters and not foreign states and actors.

This context has provided the Taliban an opportunity to spearhead a return to the past by merging Afghan nationalism with Islamic nationalism. The Taliban’s trap of nationalism hinges on their emerging re-Islamization agenda. It envisions creating a new narrative of Afghan Islam, which involves imposing a singular Islamic identity in Afghanistan. Along these lines, the Taliban intend to develop a national security force — including a special unit of martyrdom soldiers — that can fight and win. The re-Islamization plan also involves reforming the education curriculum to possibly include introducing a single national curriculum.

To an extent, such changes promulgated by other Islamist groups have roots in the Islamic revival. In Egypt, the Muslim Brotherhood embraced Islam as the “solution” to transform society, placing it at the heart of national politics. The Brotherhood opposed moderation, resisted compromise with republican values against popular demands, and applied sharia-based gender segregation. This extreme political Islamism ultimately made the movement a victim of its own ambitions. The Taliban’s political Islamism comports with the Brotherhood’s experiment. They have banished women, controlled the media, carried out revenge killings, forced a single Afghan identity, and opposed representative values. In weaponizing Islam, the path of imposed Talibanism has created an existential crisis of coexistence between the Taliban and non-Taliban Afghans, which has sparked widespread opposition.

On top of that, several other challenges have beset the militant emirate. The evolving power struggle among competing Taliban factions has plagued the Taliban-plus government, which comprises elements of terrorist groups in governing structures. This uneasy coalition includes the Haqqani Network in top government ranks, who remain in bed with jihadists like al-Qaeda. Domestically, tensions between the Haqqanis and the larger southern Taliban factions increasingly resemble two scorpions in a bottle — antagonistic, territorial, and deadly.

Meanwhile, the Islamic State-Khorasan Province (ISKP), the terror group’s Afghan offshoot, has locked horns with the Taliban in violent competition. While traditional Salafism follows the strict Hanbali version of Sunni Islam (as observed in Saudi Arabia), most Salafists groups in Afghanistan (minus al-Qaeda) arguably dabble between Hanafi and Salafist Islam. Increasingly, this includes the members of ISKP, who, as former or rebranded Taliban, typically follow a textualist version of Hanafi Islam rather than Hanbali Islam. In fact, ISKP members have generally avoided making public pronouncements of their Salafist credentials. Instead, they have set themselves apart by targeting non-Sunni groups they consider apostate, mainly the Shi’a community.

In the 1990s, the Taliban’s views as adherents of Hanafi Islam were not too inspired by Salafist Islam (a competing ideology), nor did their worldview appear pan-Islamist. However, this scene later changed as the Taliban’s exposure to foreign jihadists grew, which arguably blurred the group’s broader ideological lines. In the two decades since, the Taliban’s symbiotic partnership with Salafist jihadists like al-Qaeda effectively wedded the two competing ideologies. As a result, while most Taliban members today remain extreme Hanafists, a growing number of them have spun off to embrace Salafist groups such as the Islamic State. But despite the Taliban’s sympathy toward non-Afghan jihadists, their primary goal has long been establishing a single pan-Islamic state in Afghanistan. The ISKP, for its part, has violently opposed the Taliban for imposing an exclusively Hanafi state in Afghanistan.

All the while, a tangled web of jihadists has romanticized the Taliban’s victory. In a statement, al-Qaeda glorified the Taliban for “breaking America’s back," showering it with praise for not abandoning the way of “jihad and martyrdom.” The Taliban’s takeover has also presented a template for victory to a raft of groups, who are burnishing their jihadi credentials. Unsurprisingly, scores of foreign fighters are now pouring into Afghanistan. One former senior aide to Osama bin Laden publicly broadcast his return to Afghanistan. Jihadists have also used the Taliban’s allure to expand their propaganda in virtual spaces, including on Telegram, Twitter, and Facebook. Most are proudly using Taliban monikers such as al-Emirati, al-Omari, al-Afghani, and al-Mansoori. Meanwhile, a network of overlapping Pakistani and Central Asian groups are patiently reorganizing their forces — possibly to form tactical partnerships — and spelling new dangers of Takfiri jihadism.

For its part, the United States has concluded that it cannot change the ideological dynamics of Afghanistan. In July, President Joe Biden even declared that “no nation has ever unified Afghanistan,” emphasizing the prospects of “one unified government” as “highly unlikely.” The Taliban’s exclusionary policies have, meanwhile, prompted some Afghan ethnic factions to call for a softer partition of Afghanistan to splinter it into a loose confederacy of statelets like the former Yugoslavia.

While constructive pragmatism is important, there is no drive-thru option for a solution. While America’s present approach appears to be a mix of necessary engagement and condemnation of the Taliban’s actions, several shortcomings have reduced the practicality of U.S. options to meaningfully engage the Taliban. Chief among them is the negligible U.S. engagement with the Taliban's clerics, who wield real power and legitimacy. Tribalized, most of them maintain independent power bases, personalized styles of leadership, and outsized roles as part of the intra-Taliban network and their internal inclusivity. While it is unclear what place pragmatic politics occupy in these clerics’ worldview, public information about them is either scant, unreliable, or missing. There is little credible information about which factions the clerics represent, how they deliberate, how they compromise, and how they arrive at decisions. This dearth of political intelligence has put the United States at a disadvantage.

Nevertheless, the U.S. exit from Afghanistan has opened a path toward a genuine political settlement. Because most Afghans reject imposed Talibanism, the creation of a broad-based Taliban-led government should serve as a principal requirement for direct financial assistance and diplomatic recognition. Makeshift solutions such as convening a Loya Jirga could enable the Taliban to use the gathering to rubber-stamp their ideological state, without offering an acceptable succession plan. One option is to convene another Bonn-style conference, where the Taliban and non-Taliban Afghans can together sketch out a framework for their shared new government. In this “road to Damascus” moment, America should not stare at another defeat before the Taliban become victims of their own ambitions.

Javid Ahmad is a senior fellow with the Atlantic Council. You can follow him on Twitter @ahmadjavid. The views expressed in this piece are his own.