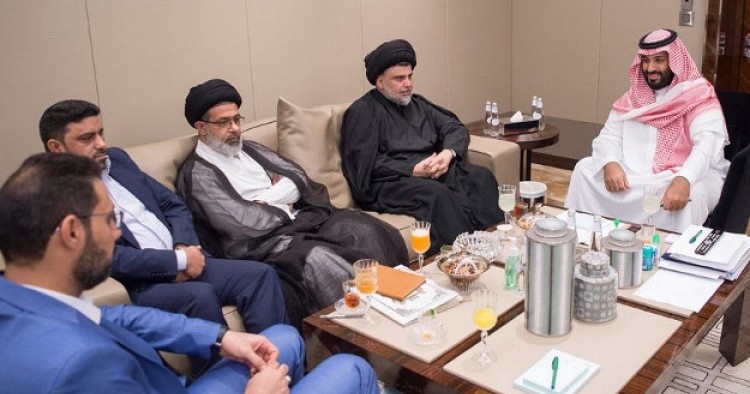 Iranian media outlets, analysts and politicians warn that Saudi Arabia and its regional allies are cultivating close ties with Muqtada al-Sadr and other Iraqi Shiite clerics and political leaders to roll back Iran’s influence in post-Islamic State Iraq and the broader region. While some suggest that Riyadh’s outreach to Iraqi Shiites is part of the kingdom’s efforts to defuse tension with Tehran, others see it as a plot to isolate Iran. At the center of this debate is al-Sadr, who recently visited Saudi Arabia and the United Arab Emirates and is scheduled to travel to Egypt soon.

The Iranian daily Kayhan, a mouthpiece of Supreme Leader Ali Khamenei, wrote that al-Sadr was “selling” himself to Saudi Arabia for political and financial support. “Despite his pledges about leaving politics, it appears that Muqtada al-Sadr’s heart is invested in power. The reason he is siding with the Saudis to this extent is because he feels he is isolated in Iraq. He therefore wants to take an initiative to checkmate all his political rivals by adopting different positions and to emerge as a national hero,” the conservative outlet added. The paper cautioned al-Sadr that his pro-Saudi policies will diminish his support among the al-Sadr movement.

Ahmed Salek Kashani, an Iranian lawmaker representing Isfahan Province, told the Parliament’s official news site that Riyadh has started a “new project’ to exert influence in Iraq at the expense of Iranian interests. “Saudi Arabia and the United Arab Emirates have become Muqtada al-Sadr’s close friends. Through the language of the leader of the al-Sadr movement, they want to rescue Daesh [Islamic State] by taking positions against Hashd al-Shaabi,” Kashani said referring to al-Sadr’s latest call for the Popular Mobilization Forces (P.M.F.) to be disbanded after the defeat of the Islamic State. The parliamentarian claimed that Saudi Arabia and Israel are concerned because the expansion of Iranian-led “resistance” poses danger to their regimes.

An article in the Students’ News Agency opined that Iraq will turn into a “diplomatic battleground” between Iran and Saudi Arabia after the fight against the Islamic State is over. It stressed that the nuclear agreement Tehran signed with world powers is losing its value and Tehran’s influence in Iraq will be the Islamic Republic’s “winning card” to play against its regional rivals to shape regional developments in the future.

Many Iranian analysts of Middle Eastern affairs argued that al-Sadr’s close ties with Saudi Arabia will trigger a backlash against the Iraqi cleric among his followers. One expert, Hossein Royvara urged the Iranian government not to take the path of confrontation with al-Sadr despite his “mistakes” and instead try to unite the Iraqi Shiites.

However, some media outlets expressed the cautious optimism that Saudi outreach to Iraqi Shiites could soothe tension between Tehran and Riyadh. “Diplomatic exchanges between Iraqi and Saudi officials and other diplomatic and political developments in the last one month are not happening by coincidence. They should be seen as efforts by Iran and Saudi Arabia, particularly by Saudi Arabia, to improve their relations,” wrote Tabnak News Agency, which is affiliated with Mohsen Rezaei, the former chief commander of the Islamic Revolution Guards Corps (I.R.G.C.) and current Secretary of the Expediency Discernment Council. The article also pointed to the recent handshake between Saudi and Iranian foreign ministers in Turkey and an agreement between Riyadh and Tehran over Iranian pilgrims going to Hajj this year.

The article, though, noted that these diplomatic gestures may not necessarily bring about “fundamental change” in Saudi-Iranian relations because of long-standing distrust between the two rivals.

Comment: Muqtada al-Sadr is a member of an influential Shiite family and a son of prominent Shiite cleric, the late Grand Ayatollah Mohammad Sadeq al-Sadr. While Sadr has lost some of his political clout recently, he still has a large support base among the Iraqi Shiites as the leader of the al-Sadr movement. He also runs a private militia force and his party has a representation in the Iraqi parliament. It is therefore not surprising that his visit to Saudi Arabia and his meeting with the Saudi crown prince and other senior officials have caused a stir in Tehran.

Although Sadr has lived in Iran for years (he lived in Iran when his fighters fought U.S.-led coalition forces in Iraq after the 2003 invasion) and has maintained close relations with Iranian religious, military and political establishments, it is not the first time that he has antagonized Tehran. In April, he publicly called on Iran’s ally Syrian President Bashar al-Assad to step down to avoid further bloodshed in the war-ravaged country. Unlike some other Iraqi Shiite militant leaders close to Tehran, Sadr has also refrained from hostile rhetoric against Saudi Arabia and other Sunni states in the region. In May, Sadr called on Iran and Saudi Arabia to engage in “serious dialogue” to bridge their differences and stabilize the region.

His trip to Saudi Arabia also comes at a time when Riyadh and Baghdad have recently taken steps to repair their relations. Saudi Arabia reopened its embassy in Baghdad in 2015 after more than two decades. Earlier this year, Saudi Foreign Minister Adel al-Jubeir made a rare visit to the Iraqi capital; and last month, the two countries announced the formation of a coordination council to enhance their strategic ties. Likewise, Iraqi prime minister and minister of interior have also paid visits to the Kingdom this year.

Saudi Arabia – as many other countries in the region – is concerned about Iran’s growing influence in Iraq. During Haider al-Abadi’s visit to Riyadh, Saudi officials raised the issue and particularly urged the Iraqi leader to cut Tehran’s support for the Popular Mobilization Forces (P.M.F.).

With the Islamic State on the brink of defeat in Iraq and Iraqi parliamentary elections slated for next year, Tehran may be worried that Muqtada al-Sadr may form an alliance with Iraqi nationalists and Sunni blocs to challenge Iran-friendly Shiite government in Baghdad.