Telecommunications Trends in the Middle East 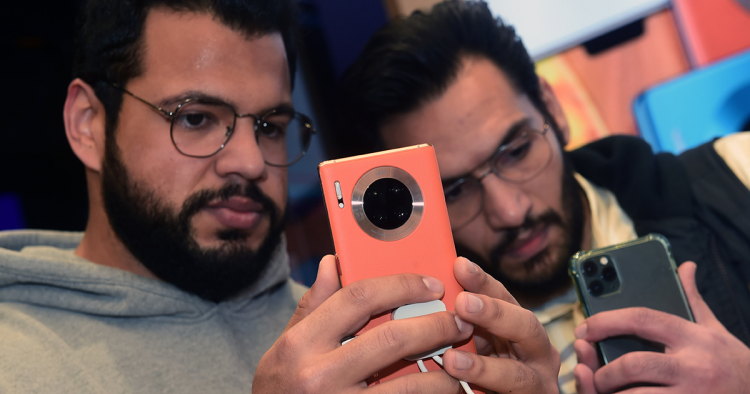 The Middle East1 has been part of, and benefited from, the telecommunications revolution of the last 25 years. Since 2000, most countries in the region — except for Lebanon, Syria, and a few others whose reforms were cosmetic — liberalized their telecom industries and set them on a sustainable, dynamic growth path. While some states have maintained significant stakes in telecom, they also introduced competition, albeit to varying degrees, in the market, established effective regulatory authorities, and shifted the investment to the private sector.

Mobile telecommunications is the fastest spreading technology in recorded history and the Middle East is no exception to that. In 25 years, it has reached 400 million people (unique mobile users) and about 280 million of them became mobile internet users. During the same period, 360,000 jobs were created in the region by the mobile ecosystem and over 640,000 indirect jobs.2

"The race for faster, more reliable technology has continued and the gap between technology leaders and late adopters has increased."

There are several trends that have shaped the telecom industry in the Middle East over the last few years. The COVID pandemic of the past 18 months has not made a dent in telecom revenues (a dip of less than 1%), but it demonstrated the strength and resilience of the telecom networks as they withstood the sudden surge in usage.

The first and most noticeable trend is that the race for faster, more reliable technology has continued and the gap between technology leaders and late adopters has increased. The Gulf countries — the UAE, Saudi Arabia, and Qatar — have been the leaders in rolling out 5G technology and offering it commercially. Just a few years earlier, they took the lead in deploying 4G networks. The rollout of 4G technology continues apace in the Levant and North Africa and 5G remains an aspiration to achieve in the next few years. 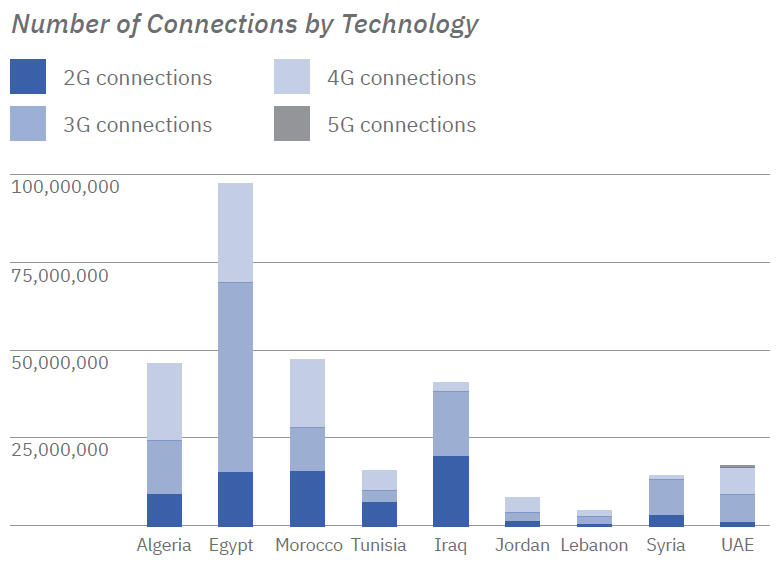 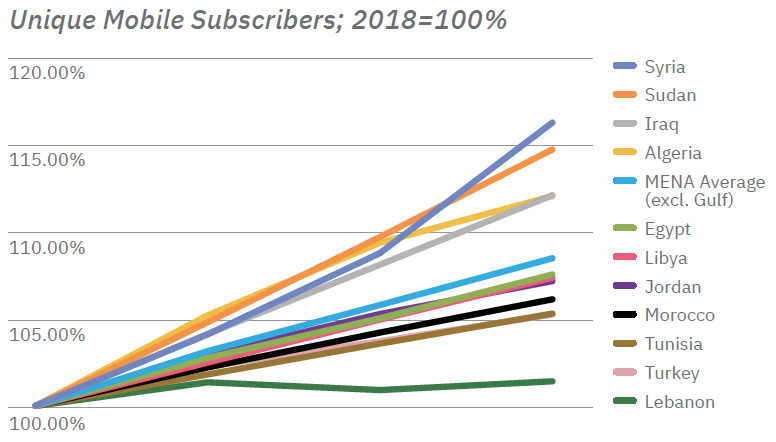 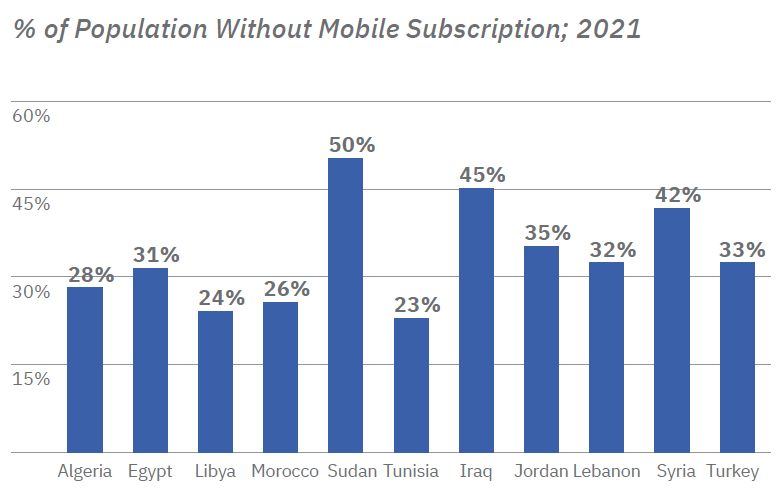 The third trend is the rapid rise of the Gulf operators, namely Etisalat, Saudi Telecom Company (STC), Zain, and Ooredoo (Qatar). Etisalat’s footprint covers 16 markets, Ooredoo covers 10, and Zain covers 8. In three years, STC and Etisalat’s market cap grew by 47% and 45%, respectively. Zain Group followed with a 34.5% growth.4 These four operators have also grown in terms of subscribers and revenues, all the while maintaining high levels of profitability.

The fourth trend is the emergence of new regulatory challenges: data privacy and cybersecurity. The access of telecom providers, as well as social media platforms and many other businesses, to more and more of the users’ private data has made these issues urgent. The adoption of the EU’s General Data Protection Regulation (GDPR) prodded countries in the region to realize the importance of data protection. Some have introduced legislation with a view to promote data protection while encouraging the growth of the digital economy. Others have dealt with it through a top-down approach that is primarily focused on enhancing state control, which could set back the country’s hope of a rapid digital transformation of government institutions and businesses.

The fifth trend has been the release of more spectrum for telecom services in the last few years. By making more spectrum available and assigning it by any other means than auctions meant to maximize government revenues, regulators lower the cost of mobile broadband services. In a competitive market, this results in increased coverage and lower prices for consumers. The UAE and Saudi Arabia have been the most effective at allocating spectrum to mobile operators. In 2020, at the beginning of the pandemic, Saudi Arabia made additional spectrum available to mobile operators at no charge. This helped them rapidly meet the surge in demand for mobile broadband services. 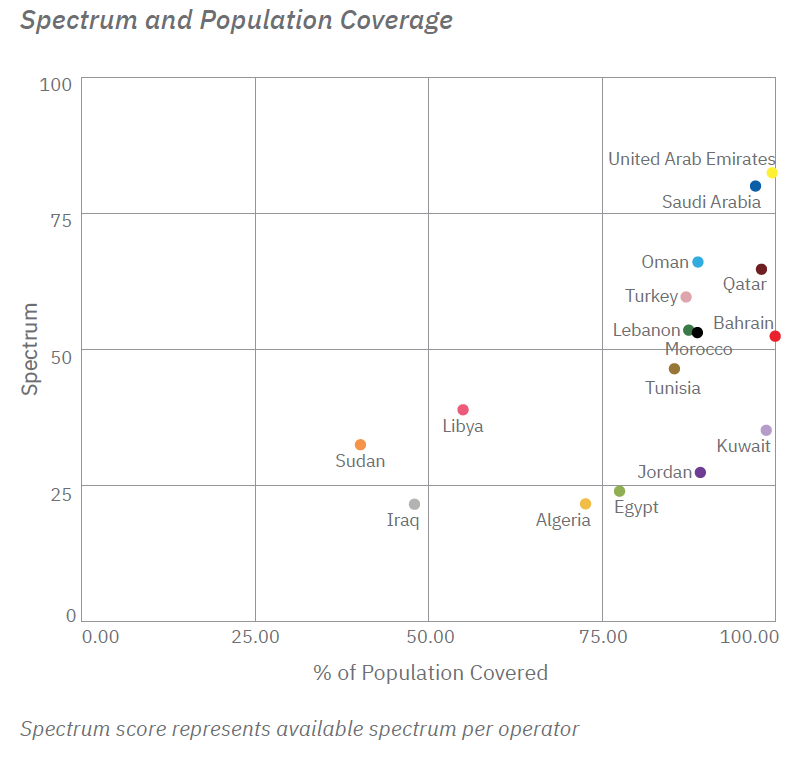 Trends in telecommunications in the region are headed in the right direction. Yet not enough is being done to bring mobile services and mobile broadband to more people. Universal service funds in most countries have been accumulating funds collected from operators, funds which should have been used to improve coverage in areas where it is not commercially viable. Most governments have not allocated enough resources, or failed to coordinate policies, to digitize government services. While both the UAE and Saudi Arabia have made it a priority to have an ecosystem that attracts digital businesses and enables them to scale rapidly, most other governments have done little on that front.

There is, however, a very promising phenomenon in the region. There are communities of entrepreneurs in the technology space building viable, growing businesses, and they are supported by a wide network of investors. These entrepreneurs and investors are not restricted by borders or stale bureaucracies. They are changing the region one digit at a time.

Kamal Shehadi is the chief legal and regulatory affairs officer at Etisalat International. Prior to that, he was the chairman of the Telecommunications Regulatory Authority in Lebanon and, for many years, an advisor to governments and a consultant to regulators and investors.