Testimony: The Human Toll of Turkey’s Policy at Home and Abroad 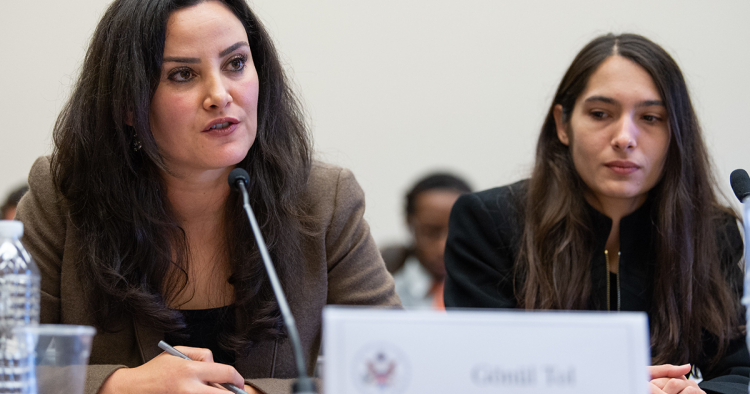 The following testimony was delivered before the U.S. Helsinki Commission at a hearing titled, "At What Cost: The Human Toll of Turkey's Policy at Home and Abroad," on October 31, 2019. Click here for more information, including video and transcripts.

Mr. Chairman, members of the Committee, it is an honor to be invited to speak with you today about human rights developments in Turkey.

Most freedoms under Turkish President Recep Tayyip Erdogan have been dramatically curtailed. As observed by Freedom House, “While not every utterance that is critical of the government will be punished, the arbitrariness of prosecutions, which often result in pretrial detention and carry the risk of lengthy prisons terms, is increasingly creating an atmosphere of self-censorship.” Opposition leaders continue to face arrest and prosecution. Selahattin Demirtaş, the 2018 presidential candidate of the pro-Kurdish Peoples’ Democratic Party (HDP), who was convicted on terrorism charges and sentenced to four years and eight months in prison, and Eren Erdem, a former Republican People's Party (CHP) lawmaker, who was arrested last year for supposedly supporting a terrorist organization, both remain behind bars.

Authorities use anti-terror laws broadly against those who are critical of the government. Last year, one fifth of the total prison population had been charged with or convicted of terrorism offences, according to the Ministry of Justice. Many terrorism trials lack compelling evidence of criminal activity. Thousands of people, including minors, journalists, foreign journalists, human rights activists, and social media users, who exercise their right to freedom of expression, face criminal prosecutions on trumped-up terrorism charges. In an example of the government’s broad use of anti-terror laws, two teenagers who drew a picture of an electric kettle and wrote the name of the pro-Kurdish party’s jailed presidential candidate Demirtas on a wall in Istanbul were arrested and charged with disseminating terrorist propaganda. The kettle was a reference to Demirtas’ social media post by his lawyers about tweeting via an electric kettle in his prison cell.

The mainstream media is largely controlled by the government. The very few independent newspapers and websites face tremendous political pressure and are targeted for prosecution. Academic freedom has been weakened further. Academics and students continue to be prosecuted for expressing critical views of the government or for peaceful political action.

Most concerning of all, however, is the ongoing conflict between the Turkish state and the Kurdistan Workers Party (PKK). A string of clashes in the mainly Kurdish region between the PKK and Turkish security forces has killed thousands since the ceasefire broke down in 2015, including 464 civilians, 1,166 Turkish security personnel, and 2,544 PKK militants, and displaced 350,000 people . Both the PKK and the Turkish state played a role in the destruction of major segments of Kurdish cities. The political ramifications of the fighting have been equally disastrous. The Turkish state response has largely criminalized Kurdish political expression. Hundreds of Kurdish news outlets have been shut down. Thousands of HDP activists as well as tens of Kurdish co-mayors and HDP parliamentarians remain in prison. The Turkish government has removed elected mayors in Kurdish regions and installed government-appointed trustees in all but a few of the 102 HDP-controlled municipalities.

Do not give up on Turkish democracy just yet

Turkey has turned increasingly authoritarian under President Erdogan but it is not a full-blown dictatorship. Public opinion, elections, and civil society still matter in Turkey. The March 31st local elections were a breath of fresh air for those long resigned to the fact that the ballot box doesn’t matter anymore and that President Erdogan was invincible. To the surprise of many, the opposition captured almost all of Turkey’s major cities, including Istanbul, its biggest metropolis and economic powerhouse, as well as the capital, Ankara, boosting hopes that March 31st would mark the beginning of the end of Erdogan’s 17-year rule. The decision by Turkey’s Supreme Election Council (YSK) on May 6th to nullify the results of the Istanbul mayoral election and call for a new vote quickly changed the mood, however. Giving in to pressure from President Erdogan, who contested the Istanbul election won by the CHP candidate, Ekrem Imamoglu, by about 13,000 votes, claiming voter fraud and other irregularities, the YSK ordered a rerun on June 23rd. Pessimists thought that they were right all along and that Erdogan would do everything not to lose Istanbul a second time. But they were proven wrong. Erdogan lost Istanbul a second time — and this time by a much larger margin of 775,000 votes. The victory was the result of the opposition parties’ unified stance, the support given to the democratic process by Turkey’s Kurds who voted overwhelmingly for the opposition and the mobilization of citizens and civil society organizations. In a show of civic strength and popular defiance against Erdogan, elections monitoring groups, lawyers’ associations, and political parties mobilized thousands of volunteers and lawyers to observe balloting at Istanbul’s more than 30,000 polling places.

US Response to Turkey’s Democratic Backsliding Has Historically Been Muted

US policy has mimicked Turkey’s view of the Kurdish problem and treated it as a domestic security matter. The birth of the PKK as a Marxist-Leninist organization in the 1970s made it easy for the US to adopt Turkey’s position on the larger Kurdish question. After the Cold War, Turkey remained important for US goals in the Middle East. In an effort not to destabilize a key ally, the US policy remained indifferent to the democratic struggle of Turkey’s Kurds. More recently, the United States allied itself with the PKK’s Syrian offshoot, the YPG, in its fight against the Islamic State. While Kurds died in the thousands in that campaign, the West admired their courage, called them “heroic fighters” but paid little attention to their long history of persecution under oppressive regimes and their struggle for more rights in the countries where they reside.

The Kurdish question, however, is a matter of democratization and human rights. Under repressive Turkish governments since the inception of the modern Turkish Republic, Kurdish identity has been suppressed, the Kurds have been denied basic rights and they have been subjected to repressive and discriminatory measures. Although Turkey has legitimate security concerns emanating from its decades-long conflict with a group considered to be a terrorist organization by Turkey, the US, and the EU, denial of Kurdish ethnic identity and democratic rights is at the heart of the problem. Thus, the responsibility rests on the Turkish government to acknowledge Kurdish democratic aspirations such as mother-language education, an end to discriminatory laws and fair political representation.

The US must change its narrative that frames the Kurds as “great fighters.” This narrative only perpetuates the flawed, security-oriented approach to the Kurds. Instead, the US must recognize the rich history and diverse politics and sociology of the Kurdish people and their common struggle to achieve more rights. This is not just a moral imperative for the US but a practical one too. Today’s regional context ties Turkish democracy and the peaceful resolution of the Kurdish question to the U.S.’s security interests in the region. The steps Turkey has taken in Syria in an effort to contain Kurdish nationalism have hurt the fight against the Islamic State, put the two NATO allies on a collision course, and empowered US adversaries such as Russia, Iran, and the Assad regime.

Only a more democratic Turkey can address the Kurdish question peacefully. The US should not see Turkey as a lost cause. There is still hope for democracy in Turkey. Given growing support in Turkey for EU membership and anti-Americanism, the US would be better advised to work with the European Union for democracy assistance to Tukey, attach democratic conditionality to Turkey-US free trade agreement and military aid, and incentivize American NGOs to monitor election monitoring.

Photo courtesy of the US Helsinky Commission.