There may not be any celebrations, but the Israeli-Jordanian peace agreement has endured for 25 years 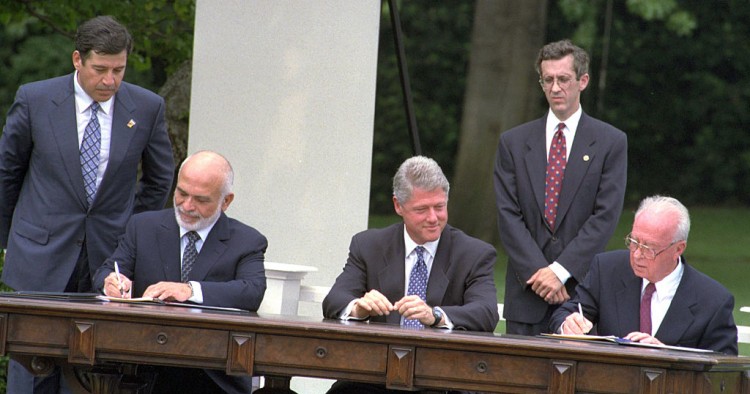 Oct. 26, 2019 marked the 25th anniversary of the signing of the peace treaty between the Hashemite Kingdom of Jordan and the State of Israel. A quarter-century on, relations between the two countries remain mired in disputes and difficulties, and no special celebrations were planned despite the significance of the event. While the challenges facing the two states are complex, both sides benefit from the agreement. The fact that the peace treaty has endured for two and a half decades amid the chaos and unrest afflicting the region is certainly a cause for celebration and gives grounds for optimism.

The Israeli-Jordanian peace agreement was built on decades of cooperation between the two sides, predating even the foundation of the State of Israel. In 1947, secret negotiations were held between the Jewish settlement led by Golda Meir of the Jewish Agency's Political Department and King Abdullah I bin al-Hussein. The two leaders met for the first time on Nov. 17, 1947, in Naharayim, to discuss possible cooperation. Among other things, Abdullah proposed the establishment of an independent Jewish republic within the Jordanian monarchy, which would include a joint army and parliament, and asked Golda what she thought about the possibility of Jordan annexing the Arab part of the British Mandate. To this, according to Menachem Milson’s account in Jordan and the West Bank, the Jewish delegation replied that it would see it favorably, if it did not interfere with the establishment of the Jewish state.

A number of factors brought the two sides together and ultimately helped pave the way for the 1994 peace agreement: they share a common border (Israel’s longest), uphold a Western view, are supported by the West, and face similar threats. After the treaty, the two states signed another 16 sub-agreements covering various specific issues. The bilateral agreement included provisions on important areas like borders, normalization, security, Jerusalem and the holy places, water, and infrastructure. While there may be a divide between the two sides on most, if not all, of these areas now, and some of them will be quite difficult to resolve, at the end of the day the agreement has endured and remains in effect. Even if there are occasional votes calling for it to be canceled, the chances of that happening are quite small. Maintaining the agreement is important for both countries and is central to their national security.

The nature of the Jordanian and Israeli regimes is an important factor in explaining the deal’s longevity, especially for Jordan, where public opinion has been hostile to Israel for decades. Because Jordan is a monarchy and the king does not have to put his choices up for public approval, he is free to act largely as he sees fit. In Israel, by contrast, public opinion toward both Jordan and the peace agreement is for the most part indifferent. It warrants little consideration, and after a quarter-century, it is almost taken as a given. However, this is also why the peace agreement between the two leaders has not translated into peace between the two peoples. Nevertheless, while it may not generate much popular enthusiasm, the agreement is important for both parties and the two sides enjoy clear benefits from it.

For Jordan, the elimination of a threat from Israel allows it to focus on dealing with regional threats (such as Syria, for example) and internal issues (such as maintaining stability amid challenges to the legitimacy of the monarchy, especially from the kingdom’s large Palestinian population). In addition to reducing risks, the agreement also helps to foster cooperation toward shared regional interests. For Israel, the treaty safeguards its longest border and significantly expands its strategic depth. Jordan’s stability is important to Israel, as it helps to prevent the establishment of another regime, Palestinian or otherwise, that would likely be hostile toward it.

Both countries also face similar challenges in regards to access to natural resources, namely water and gas. Jordan and Israel suffer from a severe lack of water resources. Water was an important issue in the talks leading up to the 1994 agreement and it remains one today. In 2015, an agreement was signed between the two sides to launch the “Red Sea-Dead Sea Water Conveyance,” an initiative aimed at exploring the possibility of connecting the Red Sea to the Dead Sea, with the aim of providing potable water to Jordan and Israel. Israel’s recent natural gas discoveries in the Mediterranean are another point of interconnectivity. About three years ago, Israel signed a 15-year, $10 billion contract to supply 45 billion cu meters of gas to Jordan — or around 3-3.5 billion cubic meters per year. The U.S. government serves as the guarantor of the agreement, which makes it both safer on the one hand but also more difficult to cancel on the other.

Thus, although there are clear benefits for both sides, or at least for the leaders on both sides, Israel and Jordan have taken steps to weaken the peace agreement in recent years. The latest such incident is related to the Arava and Naharayim (Island of Peace) enclave, two areas adjacent to the border that were leased for 25 years following the signing of the agreement, with the possibility of an extension. In October 2018, King Abdullah announced that he would not extend the leases — a move that created a great deal of controversy in Israel, prompting some to worry that the agreement could be cancelled in its entirety.

The king’s unwillingness to extend the lease may be a result of Israeli Prime Minister Benjamin Netanyahu’s announcement of his intention to annex the Jordan Valley and the Dead Sea if he were to be re-elected as prime minister (which, as of the time of writing, is still unclear). Netanyahu’s statement was made mainly for domestic political reasons in the run-up to an election and should be taken with a grain of salt. It is unclear whether he actually has plans to annex the territories, but this has been of little consequence for King Abdullah. The king’s decision not to renew the leases was also made for domestic political reasons and was aimed at silencing the many voices calling for the agreement to be scrapped altogether.

Outside factors may have played a part in King Abdullah’s decision as well. The king has been outspoken in his criticism of the U.S., most notably of President Donald Trump, for recognizing Jerusalem as the capital of Israel and transferring the U.S. embassy to the city. The king asked the U.S. president to leave the issue of Jerusalem to be negotiated between the Israelis and Palestinians at a later date, presumably in order to divide the city into two if and when the two sides reach that point. This American move, which was interpreted as unilateral support in Israel, has prompted the king to position himself as the defender of the Palestinians and an Arab leader working to save Arab lands from the Israelis.

The sensitive issue of administration of and access to Muslim holy sites in Jerusalem has been an ongoing cause of tensions between the two sides as well. There is growing internal pressure in Israel to limit the power of the Jordanian-funded Jerusalem Islamic Waqf and allow Israeli institutions to play a greater role in managing and using the city’s holy sites. For King Abdullah, however, his role as guardian of Jerusalem’s Muslim holy places helps to shore up his legitimacy, both with his citizens as well as with other Muslim countries — although this role has been repeatedly challenged by the Palestinian Authority, Hamas, Turkey, and even Saudi Arabia.

The latest controversy began last June over the issue of the Golden Gate, located near the Old City Wall in Jerusalem and the al-Aqsa Mosque, and whether it is part of the area under the Waqf's management or is the responsibility of the State of Israel. The question at the core of this is whether the area should be open for Muslim prayer or for use by visitors and worshipers of all religions, as it has been to date. In the months since, the Israeli police have refrained from taking any action related to the complex and it appears to be part of the Israeli “lull” policy, perhaps as part of negotiations for the two enclaves or with the aim of initiating them.

Interwoven with all of the other issues is the overarching matter of the Israeli-Palestinian conflict and the lack of progress on its resolution, which creates major problems for Jordan in regard to its peace treaty with Israel. One of the factors that helped facilitate the signing of the agreement in the first place was the fact that talks were already being held with the Palestinians. King Abdullah supports a two-state solution and opposes the U.S. president’s “deal of the century,” though his views may change as a result of American and Saudi pressure. Palestinians account for half of Jordan’s population, so this issue needs to be addressed — and in a way that they accept. If not, as has been the case in the past, it could lead to severe domestic unrest. The Jordanians’ concern is that oppressive Israeli actions could prompt large numbers of Palestinians to move to Jordan, undermining the delicate balance that exists there between different population groups and potentially leading to violent riots. Promoting a solution to the Israeli-Palestinian issue, therefore, is a prime objective for the monarchy.

In conclusion, the attitude of the Jordanian government toward the agreement seems to be a delicate balancing act between quiet, matter-of-fact cooperation and occasional hostility, which sometimes includes public condemnation in the interest of maintaining domestic stability. Israel, for its part, seems to have become accustomed to this reality and the fact that the peace between the two states will be maintained at the administrative-state level and will not spread further. Hopefully the parties will find a way around this difficulty at some point to establish an agreement that will be supported by citizens on both sides of the border. The road there may be long, but the fact that the existing agreement has kept the peace for a quarter of a century certainly provides a solid basis for the development of better relations in the future.