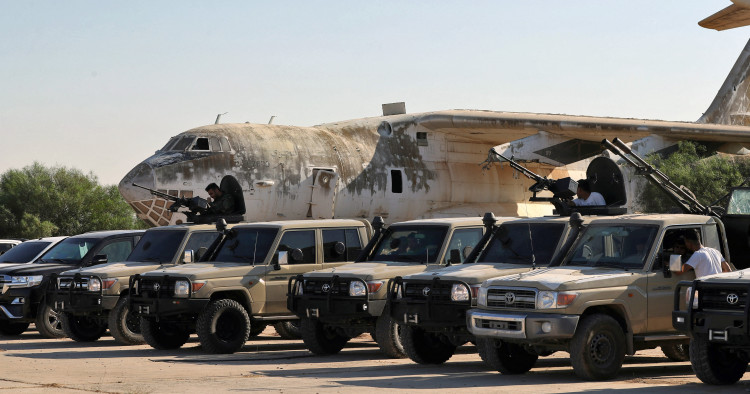 On Sept. 2, after a 10-month interregnum, Senegalese diplomat Abdoulaye Bathily was appointed the new special representative of the United Nations secretary general (SRSG) for Libya and the head of the U.N. Support Mission in Libya (UNSMIL). But to have any chance of success, the new SRSG will need to change the paradigm that has prevented his seven predecessors from stabilizing the North African country over the past decade.

Since the last round of national elections in June 2014, various political players have left the field, to be replaced by new faces. But the paradigm of the competing coastal governments struggling for power and legitimacy has endured, with the control of population centers in Fezzan, Libya’s southwestern region, shifting back and forth between the western and eastern governments as the fortunes of war and opportunism permit. Periodically, including as recently as Sept. 3, forces aligned with the competing governments have engaged in actual, as opposed to rhetorical, fighting, resulting in civilian and military deaths.

Since 2015, the succession of Tripoli-based western governments have been anointed by U.N.-brokered peace processes. The latest of these led to the “Government of National Unity,” now headed by Abdul Hamid Dbeibah. Since his bribe-facilitated appointment in April 2021, he has cannily milked Libya’s oil revenues, projected to reach around $20 billion this year, by building a strong relationship with the long-time head of Libya’s Central Bank, Sadiq al-Kabir.

Meanwhile, the eastern governments have existed on the basis of authorizations granted by Libya’s Tobruk-based House of Representatives (HoR), elected in June 2014. HoR Speaker Aguila Saleh Issa has presided over a rump legislature that meets only when he allows it to, and his faction has turned out the lights and locked the doors of the parliament building to prevent votes he opposes from taking place. Saleh has appointed a Misratan, Fathi Bashagha, as prime minister of the east’s “Government of National Stability.” Bashagha and Saleh were formerly opponents: when Bashagha played a central role in helping Tripoli resist the eight-month-long assault undertaken in 2020 by Khalifa Hifter, the would-be dictator at the time, Saleh explicitly “welcomed” Hifter’s effort to conquer Tripoli by force. Now, Bashagha’s government is based in Sirte and backed by both Saleh and Hifter, showing how easily and dramatically alliances in Libya can change.

The Tripoli-based High State Council, a legislative consultative body established under the 2015 Libya Political Agreement intended to create one integrated government, continues to straddle the divide between both governments. The council, headed since April 2018 by Khalid al-Mishri, has withheld its support from any Libyan government and called for national elections, except when such elections were actually imminent, as in late 2021, which al-Mishri encouraged Libyans to boycott.

In such an environment, what is a U.N. special envoy to do?

The 75-year-old Bathily is not a Libya specialist or even an expert on North Africa, having spent his career primarily working on sub-Saharan African conflicts. According to precedent, his tenure as special envoy will entail meeting with various members of Libya’s political and military class. Bathily will likely get to know the figures who have spent the past decade alternately fighting and aligning with one another in their quest for advantage. He will also meet with the principal regional foreign actors who have played would-be kingmakers or peacemakers during this period, starting with Turkey and Egypt.

No doubt, such diplomatic round-robins with the myriad political, military, and economic figures, both domestic and international, who can or do play roles in Libya’s internecine conflict, could keep even the most industrious special envoy busy for months or even years. The question is: Will such work — listening and learning, cajoling and counseling, but never commanding — lead anywhere?

History tells us that a special envoy who follows the well-mapped road paved by his/her predecessors more closely resembles the horse who knows the way home, instead of a trailblazer who can lead Libya beyond its decade-long impasse.

That impasse has become ever more entrenched, with Dbeibah having successfully fended off the pro-Bashagha militias involved in the late-August fighting in Tripoli that reportedly killed 32 people and left 159 injured, according to Libya’s Tripoli-based Ministry of Health. Dbeibah has made it clear that he will only give up power to an elected leader. Bashagha has stated just as forcefully that he will not relinquish his mandate to take control over all of Libya that was granted to him by the HoR. In the meantime, separatist sentiment in Libya’s south continues to grow, reflecting real grievances, both recent and enduring.

Bathily’s relevant experience in Senegal includes service as a member of parliament, a cabinet minister, a presidential candidate, and a leader of the opposition. In the U.N., he has been involved in efforts to stabilize Mali and build a path to reconciliation in the Central African Republic. Therefore, neither the consequences of unresolved grievances nor the politics of greed will be new to him. The U.N. Security Council gave him its blessing after rejecting a number of other candidates who were all deemed unacceptable to one or more of the body’s five permanent representatives.

The U.N. should continue its existing work to progress along all three tracks of Libyan diplomacy — political, security/military, and economic. The U.N. also should continue to keep the focus on elections as central for the legitimacy of any Libyan government. But these efforts to move Libya beyond stalemate, which is a proven source of power, money, and opportunity for those currently in charge, are likely to be futile in the absence of adding a new ingredient. This new U.N. special envoy must move beyond the existing political frameworks by doing something quite different: going local.

Public polling in 2016 and in 2019 found that Libya’s municipal officials have enjoyed far greater support and legitimacy than any of the national politicians or institutions.

At the local level, Libya has districts (sha’biyah), whose number has varied from 22 in 2007 to as many as 106 in 2021. The 22 districts created after Libya’s 2006 census range from large population centers, like Tripoli and Misrata in the west and Benghazi and Derna in the east, to smaller areas, like Kufrah, Ghat, and Sabha in the south. Each of these municipalities has its own government headed by homegrown leaders. And each local government has an interest in securing a share of the revenues generated from Libya’s only meaningful source of national wealth — its oil — whose production, transit, or distribution involves most of the districts.

While maintaining the chaotic status quo has served the interests of the existing national power brokers, the most significant local political figures have at least as strong an interest in revenue-sharing from the funds generated by Libya’s oil to localities to enable them to better provide public goods and services for their local constituents. There is a second fundamental reason for the U.N. and foreign governments who want to see elections take place to engage with local governments in Libya: many of the country’s municipalities have limited capacity or training to deliver services due to their historical lack of funds. International support to them in the very immediate term, in alignment with work by UNSMIL, could help them make elections work.

Convening municipal leaders to update Libya’s constitution with provisions to share the country’s wealth at the local level might unleash new energies and unlock new solutions. At the very least, it would provide an alternative to relying on national figures who have proven themselves incapable of forming a unitary and inclusive government or even agreeing on a schedule for elections. Going local could avoid the trap of relying on those with vested interests in maintaining the destructive Libyan status quo, as sha’biyah leaders have much to gain from a more inclusive approach to sharing the country’s power and wealth.

Jonathan M. Winer, non-resident scholar at the Middle East Institute, was the U.S. Special Envoy and Special Coordinator for Libya from 2014 to 2016. The views expressed in this piece are his own.