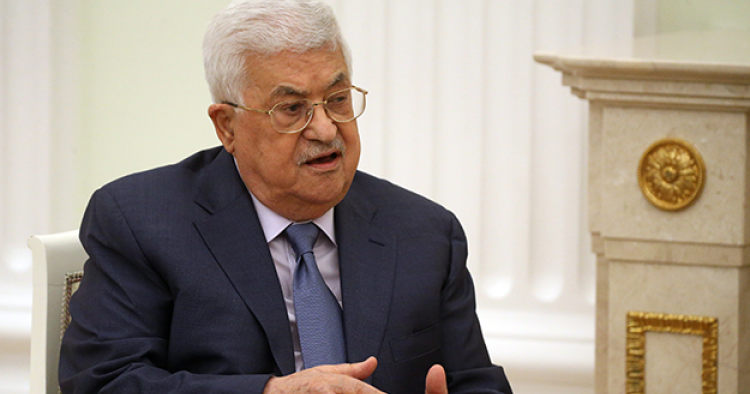 A March 2018 poll by the Palestinian Center for Policy and Survey Research showed that satisfaction with the performance of President Mahmoud Abbas stood at 33 percent; 68 percent of the public wanted him to resign; and had elections been called, he would most likely have lost his presidency to a rival from Hamas, the Islamist militant group that controls the Gaza Strip. His waning popularity was understandable, as the 84-year-old Palestinian president, who was last elected to his position in 2005, had failed to achieve Palestinian statehood. While the U.N. General Assembly may have recognized Palestine as a non-member state and the Palestinian flag may have been hoisted outside the U.N.’s New York headquarters a few years earlier,  Palestinians were fed up with their president for failing to produce any breakthroughs. Gaza was lost to Hamas and the prospects for achieving an independent state seemed more distant than ever.

Nearly two and a half years later, however, and Abbas’s political fortunes have been restored, thanks in large part to the Trump administration and the United Arab Emirates (UAE).

The Trump administration’s decision to move the U.S. embassy from Tel Aviv to Jerusalem in December 2017, followed by the announcement of the Trump “peace plan” in January 2019, provided President Abbas with the justification to declare a total boycott of the United States. Many were skeptical and didn’t believe that the Palestine Liberation Organization (PLO), which for years had been begging for an audience with the U.S., was now reversing roles and refusing to talk to Washington. But Abbas was adamant about refusing engagement with the U.S. at any level.

Further strengthening Abbas’s resolve was the Netanyahu government’s promise in late May to implement an agreed-to coalition plan with the Israeli Blue and White party to annex nearly 30 percent of the occupied West Bank. This led Abbas to suspend all cooperation and coordination with Israel, including security coordination. Again, most critics were not sure if Abbas and his security leadership would follow through on that commitment, but they did. Finally, the decision by the UAE to normalize relations with Israel brought home to all Palestinians the need for unity and cooperation because the entire Palestinian national movement was now in danger. Unlike Yasser Arafat, who would often say one thing and do another, Abbas has remained true to his promises. And this is finally paying off for him.

Abbas’s newfound prestige became clear at the meeting of the leaders of the Palestinian nationalist and Islamic factions he convened last week. The Sept. 3 meeting, the first of its kind in 13 years, of directors-general of all Palestinian factions, took place less than a month after the UAE broke ranks with the Arab world. The U.S.-inspired UAE normalization agreement with Israel put a dent in Arab solidarity with the Palestinians and violated the Arab Peace Initiative, but as a result it has forced all Palestinian factions, including Hamas and Islamic Jihad, to worship at Abbas’s altar.

Hamas, which had previously boycotted all PLO meetings, was now on board, thanks to the role played by Fatah’s strong man Jibril Rajoub along with the Hamas second-in-command Saleh al-Aruri. Islamic Jihad, a rival of the PLO since its foundation in 1981, was also in attendance.

In total, eight Palestine-based directors-general attended the meeting in the presidential headquarters (Muqa‘ta) in Ramallah, while six leaders called in from Beirut, including the top Hamas and Islamic Jihad leaders. The proceedings were broadcast live on Palestine TV.

In the five-hour-long marathon of speeches, the leaders of all Palestinian factions agreed on the gravity of the situation and the need for unity. The role of the PLO as the representative of all Palestinians also received a boost with calls for reforming and restructuring the organization established in 1964. Moreover, while Palestinian leaders insisted that resistance of all forms was a legitimate right for people under occupation, all factions agreed that peaceful popular protests are the most appropriate mechanism for confronting the continuing Israeli occupation.

The fact that it was an event controlled by President Abbas and his team meant that equal time was given to Palestinian factions that have never been involved in any guerilla activities, such as the People’s Party (formerly Palestinian Communist Party) headed by Bassam Salhi, FIDA’s Saleh Rafaat, and the Mubadara (Initiative) Party headed by Mustafa Barghouti.

Two issues that generated consensus between West Bank-based Palestinian leaders as well as Baraka from inside the green line were the need for elections to seal the new unity effort and the importance of assisting popular peaceful resistance. While President Abbas did state his support for legislative and presidential elections in the opening of the meeting, he did not elaborate on when or how such elections might take place. Abbas has promised not to run again, but he has avoided naming a successor. One important outcome though was the establishment of three committees at the end of the meeting tasked with coming up with recommendations that will be presented to the Palestinian Central Council in five weeks’ time, when the body will meet to evaluate and validate these recommendations. The three committees are dedicated to setting the popular struggle’s strategy, reforming the PLO, and national reconciliation. Hamas and Islamic Jihad, which in the past have boycotted meetings of this important PLO body, have not indicated whether they will attend.

Jibril Rajoub, the Fatah strong man who helped to ensure Hamas’s participation in the meeting, read the final communique of the conference, and in doing so sealed the return to dominance of President Abbas and the Fatah movement in Palestinian politics — at least for now.

In his opening speech, President Abbas explained the need for an inclusive intra-Palestinian dialogue: "This meeting comes at a very dangerous stage, in which our national cause is facing various conspiracies and dangers, the most prominent of which is the 'deal of the century,' the Israeli annexation plans … and the normalization projects that the [Israeli] occupation is using as a poisoned dagger to stab our people and our nation. Whoever accepts annexation is a traitor of the homeland and of our cause.” Many saw this as a reference to the renegade Fatah leader and former PA Security Minister Mohammad Dahlan, who is based in UAE and was accused on social media of having supported annexation. Dahlan himself has not spoken publicly on the issue and his supporters have opposed the annexation (although some of them recommended against attacking the Emirates).

The president went on to affirm that Palestinians will not agree to anyone speaking on their behalf and that the PLO will continue to be “the sole and legitimate representative of the Palestinian people.”

The calls by Abbas were all reflected in the final communique:

In order to achieve our strategic goals to end the occupation and establish an independent Palestinian state, we must expedite the end of the political division and achieve reconciliation and national partnership.
In this context, as a unified people who live in a single free nation, we have agreed on the need to live under one democratic political system, one authority and one law, and under a framework of political and intellectual pluralism. We have also agreed to consolidate the principle of peaceful transfer of power through free and fair elections, according to full proportional representation according to international standards.

It remains unclear whether the rhetorical support for unity and cooperation will continue in the comings weeks and months as Palestinians take on the heavy task of revitalizing their national movement. In a comment that may reflect a change in his approach, President Abbas closed the meeting by committing to respect whatever recommendations come out of the new committees. This could refer to Abbas dropping his opposition to boycotting Israel, but it also might include a softer approach to national unity with Hamas and greater acquiescence to the group, which has demanded a bigger say in the PLO as a pre-condition for a possible merger.

To that end, Abbas announced that a high-level ministerial delegation from Ramallah would head to Gaza to follow up on health requirements that are needed to handle the growing number of COVID-19 cases there.

The extreme pro-Israel moves of the United States, including moving its embassy and unilaterally declaring new Israeli-inspired parameters for the resolution of the Palestinian-Israeli conflict, as well as the unexpected decision by the rulers of Abu Dhabi, have all boosted the current Palestinian leadership and given the almost forgotten President Abbas a new lease on political life.

How Abbas and his Fatah movement will deal with the political “gift” that was inadvertently handed to them remains to be seen. Will they move towards the unity of Palestinians, while acting shrewdly enough to deny Israel a pretext to continue the siege of Gaza? And will they put a stop to annexation policies? The answers to these questions will depend on how the Palestinian leadership conducts itself in the weeks and months to come.