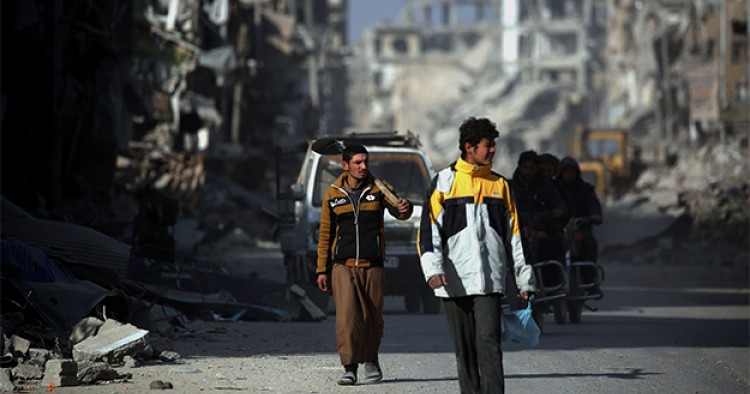 In a speech on Thursday, President Donald Trump reversed his administration’s policy on Syria, declaring “we’re coming out of Syria very soon. Let the other people take care of it now.”

The administration’s policy, until yesterday, had been enunciated by Secretary of State Rex Tillerson in mid-January, and had been premised on an open-ended military presence in northeastern Syria with the multiple aims of maintaining the fight against ISIS and al-Qaeda, pushing back Iranian influence, leveraging for a political solution in Syria, and helping create conditions for the return of refugees.

The policy reversal will come as great news for ISIS and al-Qaeda, as well as for the Assad regime, Hezbollah, Tehran and Moscow; and terrible news for America’s allies in the region, as well as the Kurdish-Arab forces that fought ISIS with American backing.

Trump had criticized President Barack Obama for withdrawing too soon from Iraq and allowing the surge of ISIS; but Trump risks doing exactly the same in Syria, where neither ISIS nor al-Qaeda have been defeated. Trump’s reversal also runs directly counter to the policy orientation of his two new foreign policy picks, Mike Pompeo and John Bolton. Both prioritize a strong pushback against Iran. But Trump’s announcement eliminates a key leverage point against Iran, and cedes Syria to “the other people” that will “take care of it now.”

Trump’s about-face in Syria also puts the U.S. presence in Iraq under pressure. Iran doesn’t want a lasting U.S. presence there, and now has more incentive to test the president’s resolve.

According to the U.S. Department of Defense, two counter-ISIS coalition servicemen, including an American, were killed and five others wounded in an improvised explosive device attack overnight in Syria. Although the DOD withheld the location of the attack, the announcement coincided with reports of a bombing in Manbij, a town in northern Syria held by the U.S. and its Kurdish-led partners, the Syrian Democratic Forces (SDF).

Manbij is currently at the center of a bitter dispute with Turkey, which opposes the presence of Kurdish forces and has repeatedly threatened to recapture the town by force. Turkish-backed opposition forces have also been accused of several recent assassinations and attempted assassinations targeting prominent figures involved in mediating between Arabs and Kurds in Syria’s north. Intensive negotiations are due to resume today between senior American and Turkish officials to resolve extant issues in northern Syria, including the fate of Manbij.

The list of possible perpetrators is long. For some, Turkish-linked actors would seem most likely, though such an escalation could as easily backfire as bring U.S. concessions. As the prospect of handing over the city to government forces has entered public discussion in Manbij, tensions have heightened between pro- and anti-regime clans. It is quite feasible that pro-regime or Iranian operatives could have sought to undermine U.S. confidence in the area and encourage an evacuation. Moreover, ISIS sleeper cells have long been suspected of operating in the surrounding area, and sowing or furthering division is classic ISIS strategy.

Regardless of who was responsible, a line has now been crossed and a precedent set—American troops in Syria are now a viable target for any number of hostile actors. The timing is also terrible, coming shortly after President Donald Trump’s declaration that the U.S. would soon be leaving Syria. The death of U.S. troops would encourage the president to accelerate a withdrawal timeline, which would put a fast and complete end to his administration’s 10-week-old Syria strategy. That would be music to the ears of any number of actors: from Turkey, Russia, Iran and the Assad regime, to al-Qaeda, ISIS and more.