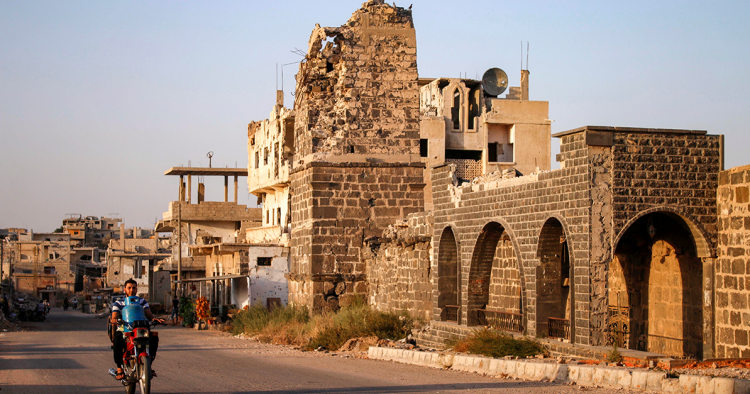 Contemporary historians of the Syrian uprising and the subsequent civil war have highlighted the role played by the clans of Daraa in the protest movement and armed conflict against the regime of Bashar al-Assad. Tribal concepts of honor, support, and revenge were significant factors in igniting the uprising and maintaining the opposition against the Assad regime. Likewise, these strong tribal networks enabled the residents of Daraa to support each other during the conflict, which lasted from 2012 to 2018.

In 2018, Assad’s Syrian government forces, with Russian support, managed to regain control of opposition-held areas in Daraa. Russia has emerged as the primary power broker by arranging agreements between the rebels and the regime, which, in turn, has allowed the rebels to keep some of their arms under the banner of the Russian-formed Eighth Brigade. Nevertheless, since 2018, the tight-knit tribal networks in Daraa have functioned as a nucleus for the continuation of the uprising against the Assad regime. The same tribal attributes that create interconnectedness among the people of Daraa, however, also render them susceptible to the regime’s strategy of pitting clans against each other and leveraging the resulting strife to justify the use of force with the goal of asserting full control.

Tribal concepts of collective action (Faz’a), support (Takatuf), and revenge (Tha’r) still motivate the residents of Daraa to stand against the aggression of Assad's militias. To express their solidarity with al-Sanamayn, a city that came under attack by the Syrian regime last February, residents of Daraa held a demonstration against the regime’s attempts to disarm al-Sanamayn’s opposition groups. Protesters chanted, as they had at the beginning of the uprising, “We would rather die than be humiliated.” They also appealed to the local armed resistance to take action in solidarity with their fellow Daraawis in al-Sanamayn. In the wake of these demonstrations, there have been several attacks on government checkpoints, carried out either by youth or resistance groups, that have resulted in the death and capture of Syrian regime soldiers and army officers. There have also been demonstrations, like those that occurred after Friday prayers in front of the al-Omari Mosque in the city of Daraa. Indeed, this mosque is no stranger to anti-regime sentiment. Protesters in Daraa have used the same venue to demand the release of Daraawis held in Assad’s dungeons. Slogans at these protests emphasize a broader mentality driving Daraawis: “The clans of Daraa stand together as one clan.”

The rise of new social figures

Socially prominent figures have also been playing multifaceted roles in Daraa since the reconciliation agreements in 2018. These individuals are not necessarily traditional tribal leaders of sheikhly families. Instead, two new types of social figures have emerged, both with tribal backgrounds. The first are members of military groups that rose to prominence during the armed resistance, such as Ahmad al-Oda, a former rebel leader and the current commander of the Eighth Brigade. The second are civil leaders who administered areas outside of the regime's control before 2018, such as lawyer Adnan al-Masalmeh.

However, these two types of actors fulfil different roles. The new military figures have been appearing at protests against the regime surrounded by other tribal leaders and notables. Al-Masalmeh has been a major force in mobilizing the clans of Daraa to unite against what he calls the "regime's partition plans." The rise of these new social figures illustrates the dynamic nature of tribalism in Syria, which has proven able to adapt to new social and political circumstances, even as it weakens the traditional tribal leadership.

Overall, many prominent figures, such as Adham al-Karad, Anwar al-Rifai, and Mis’ab al-Baradan, have attempted to establish a channel of communication between their communities and government institutions, to facilitate social and service-related demands. Abdullah al-Jabassini, non-resident scholar at the Middle East Institute, argues that clan networks have provided civilians in Daraa with a channel to voice their demands to regime institutions.

Nonetheless, tribalism can be a double-edged sword. Its dangerous edge is visible as the regime attempts to exploit tribal divisions and create hostility and mistrust among the Daraawis. The regime tries to exercise control by organizing tribal gatherings in order to legitimize itself as the official ruling authority. During the Syrian Clans Forum in Daraa last year, the attendees included the Assad regime’s clientelist network of traditional tribal leaders of Daraa. These sheikhs have attempted to amplify the claim that there is widespread support among the Daraawis for President Assad and the Syrian Arab Army. Sheikh Abdulaziz of al-Rifa’ai clan asserted that, “People in Daraa Province take pride in the great victories achieved by the Syrian Army in its war against terrorism and its backers.”

However, for many Daraawis these regime-organized tribal gatherings create a sense that they are being censored and monitored by pro-regime sheikhs. This, in turn, leads to sensitivity and division between families and clans. The regime’s attempts to sow discord among the clans have also led to an increase in violence, as the dozens of inter-tribal feuds in the governorate since 2018 attest. Often tribal figures such as Sheikh Anwar al-Rifai are targeted in assassination attempts. While there have been assassinations and attempts on both the government and opposition sides of the conflict, it is clear that the regime is the main beneficiary of the communal violence. It provides cover for the regime to restrict the opposition’s access to weapons, while simultaneously revitalizing state-security apparatuses under the pretext of imposing law and order.

When the Syrian regime captured the governorate of Daraa in 2018, many observers believed that the armed conflict in southern Syria had come to an end. They did not foresee that the tribal-based opposition networks would remain solid when facing the Assad regime’s militias. While tribalism has kept Daraawis connected and given them greater flexibility to maintain their resistance, these same characteristics also provide the Assad regime with the key to dividing the tribes against themselves and could potentially lead to the quashing of resistance and Daraa’s return to the regime’s fold.

Haian Dukhan is a Postdoctoral Fellow at the Central European University's Center for Religious Studies in its research project Striking from the Margin. The views expressed in this piece are his own.