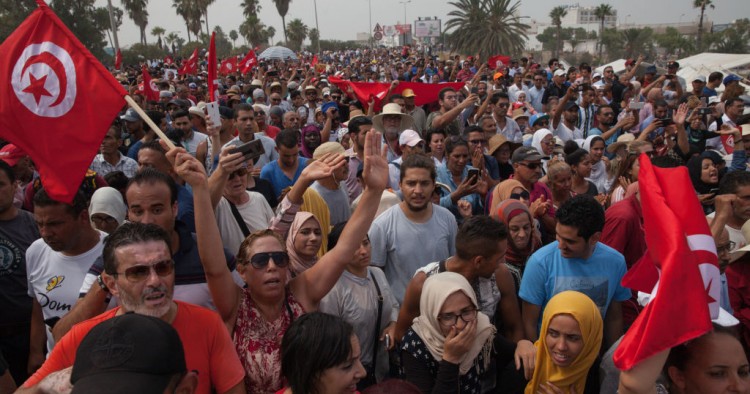 Laudatory statements and obituaries are pouring in for Béji Caïd Essebsi, who died last Thursday, July 25, in Tunis, and have emphasized his singular landmark accomplishment: serving as Tunisia’s first democratically elected president. A majestic Saturday funeral brought the Arab world’s only true democracy to a standstill as it entered a national week of mourning for its patriarch. However, Essebsi’s improbable life and accomplishments spanned over nine decades, making him, at 92, the world’s third-oldest head of state after Malaysian Prime Minister Mahathir Mohamad and Queen Elizabeth II, neither of whom helped found a nation emerging from colonialism or guided one through dramatic moments of democratization. Essebsi modeled his historic presidency on that of his idol and comrade-in-arms, Habib Bourguiba, with whom he struggled in the 1940s and 1950s to liberate the country from French rule and then labored decades more to build a modern state and educate a progressive polity. It was beneath larger-than-life projections of Bourguiba that Essebsi, in his later years, campaigned and gave speeches, and it was to further Bourguiba’s legacy that he fought hard to defend democracy and achieve their common vision within the still nascent second republic. That ambitious lifelong project, often derailed by authoritarian setbacks, caused Essebsi to depart from and then return to politics several times at critical historical junctures during his extraordinary 77-year political career. Through much of it, Bourguiba and Essebsi endeavored together to build resiliency into the Tunisian state and population.

Essebsi spent 30 of his 92 years living under the French protectorate, half of that as a youth activist engaged in the independence struggle. Essebsi was born in 1926, the great-grandson of Ismailman Caïd the Great, a Sardinian kidnapped in the early 19th century by Barbary corsairs who converted to Islam and rose to prominence as an Ottoman mamluk leader.  Like his mentor Bourguiba, Essebsi studied at the elite Sadiki College, where he developed a lifelong love for reading and education, a cornerstone of the two men’s governing ethos and nationalist aspirations. After joining a Neo-Destour youth organization in 1941, Essebsi travelled to France to earn a law degree in 1950, spending the early part of his legal career defending pro-independence activists. He went on to become an advisor to Bourguiba and after independence in 1956 served as Bourguiba’s director of regional administration, director of public safety, interior minister, minister-delegate to the prime minister, defense minister, and ambassador to France.

Essebsi left government in public protest in early 1972, penning an op-ed in Le Monde expressing his disappointment after having spent many months advocating for more democracy within his party, to no avail, and just as the severe political and economic repression of the 1970s began. He returned to government in 1981 as Bourguiba agreed to legalize opposition parties to serve as minister of foreign affairs. He supported the 1987 Zine el-Abidine Ben Ali “medical” coup and went on to serve as ambassador to Germany and then president of the lower house of parliament. Frustrated again by lack of democratic development, Essebsi retired in 1991 at 65 years old and returned to law practice. Ben Ali’s ensuing ferocious crackdown on civil society focused on Rached Ghannouchi and the Islamist Ennahda party, with whom Essebsi would later govern.

Twenty years later, his triumphal return to politics as prime minister in 2011, just weeks after Ben Ali’s ouster, allowed him to shepherd Tunisia’s political transition during its most pivotal year since independence in 1956. He remained in that role through democratic elections for a constituent assembly tasked with rewriting the constitution and launching Tunisia’s experiment with the democracy advocated by Essebsi and his brethren since 1941. The party he founded in 2012, Nidaa Tounes, or “Tunisia’s Call,” is primarily a big-tent secular alternative to Ennahda, and in 2014 it won the parliamentary and presidential elections. While he ran on a staunchly anti-Islamist platform, he then ruled in coalition with the Islamists. This decision was the extension of a private deal worked out between Essebsi and Ghannouchi in August 2013. Their agreement was further elaborated in the negotiations in autumn 2013 that hammered out further power-sharing arrangements for which four civil society organizations won the Nobel Peace Prize of 2015 and which were concretized in the government-opposition Carthage Pact of 2016.

Tunisia’s democratic success is anchored in that pact between Essebsi and Ghannouchi, in which each provided democratic cover for the other’s political existence. Its significance was rooted in the fact that Ennahda leaders had just spent decades in jail and exile under Ben Ali, and allies of Ben Ali were facing potential prison, exclusion, and exile from public and economic life following the revolution. Two key aspects of the deal were an increase to the age limit for presidential candidates allowing Essebsi to run and an agreement to allow most former ruling party members and supporters to engage in politics and business. Under Essebsi and Ghannouchi’s leadership, Tunisia deliberately chose to avoid the path of de-Baathification in Iraq or the Libyan lustration law of 2013, exclusionary policies that propelled both countries into turmoil and civil war. For their historic accomplishments fundamental to Tunisia’s democratic success, Essebsi and Ghannouchi were barely recognized by the Nobel Committee. Many still say that the “two sheikhs” were equally deserving of the Peace Prize, along with the four organizations credited with bringing them together only after they had already ventured down the path of compromise on their own.

Nevertheless, that very inclusive governing coalition with Islamists helped fragment Nidaa Tounes, which also suffered from a debilitating succession struggle involving Essebsi’s son Hafedh. That led to dozens of defections from Nidaa Tounes and the formation of a large splinter party. The ruling party may not survive his passing. As president, Essebsi continued to advance progressive causes such as laws allowing Tunisian women to register their marriages to non-Muslims and to earn equal shares to men, as the new default position in Tunisian inheritance law (with an opt-out provision for the more religiously conservative). But these laws created friction in the Nidaa-Ennahda alliance, helping dissolve the Carthage Pact last September. As most longtime Tunisia watchers predicted, this lamentable repolarization of politics has created such gridlock that the parliament is having a hard time even passing electoral laws or nominating judges to the constitutional court.

Central to Essebsi’s legacy will be his defense of the democratic transition in the wake of three horrific 2015 terrorist attacks. A former interior minister himself, he beefed up the security response including a number of regressive policies rightly criticized by human rights organizations as infringements on civil liberties. To defend Tunisia’s democratic experiment, Essebsi privileged the Libya and security files, and succeeded in containing spillover from the Libyan conflict, famously in response to a 2016 ISIS attack on Ben Guerdane, during which patriotic citizens and security forces joined together in a valiant defense that can be attributed in part to Essebsi’s leadership. His major legislative “achievement,” however, was the highly unpopular economic “reconciliation” law agreed upon in the 2013 private meeting with Ghannouchi that was supposed to help jumpstart the weak post-revolutionary economy, but which was seen by most as too much amnesty for those who had benefitted from corruption under the ancien regime. Perceptions of corruption increased under his watch, in part due to the withering of the old authoritarian economic order not yet replaced by better governance and business practices. Essebsi should be credited with general success in the security realm, but governments under successive prime ministers during his presidency have largely failed to deliver socioeconomic dividends to most Tunisians. Amid worsening economic stress, he frequently talked about “restoring Tunisia,” but this retroactivity did not meet the revolutionary expectations of marginalized populations, especially youth, whose demands were often dismissed as overly idealistic or “impatient.” Worse, he presided over the straightjacketing of the Truth and Dignity Commission and its important work on transitional justice.

While Essebsi’s legacy as president will be mixed, and he may not have been the greatest promoter of democratic praxis, he did emerge as Tunisian democracy’s greatest defender. What he leaves Tunisia and the world is a brilliant incomplete experiment, and, despite the growing resilience of Tunisians tested at the borders and in unruly borderlands, still a fragile experiment. His greatest legacy will not be his political party, now threatened by infighting and atavistic impulses, or his mixed legislative or governing accomplishments, but rather his fearless and peerless leadership at critical historical moments in concert with the transcendent example he set, promoting education, women, inclusivity, and compromise in an increasingly partisan and turbulent era.

William Lawrence is a visiting professor at George Washington University and former North Africa director for the International Crisis Group and president of the American Tunisian Association. The views expressed in this article are his own.

Monday Briefing: Attack on Saudi oil facilities has an impact far beyond the kingdom