Turkey: All dressed up with nowhere to go 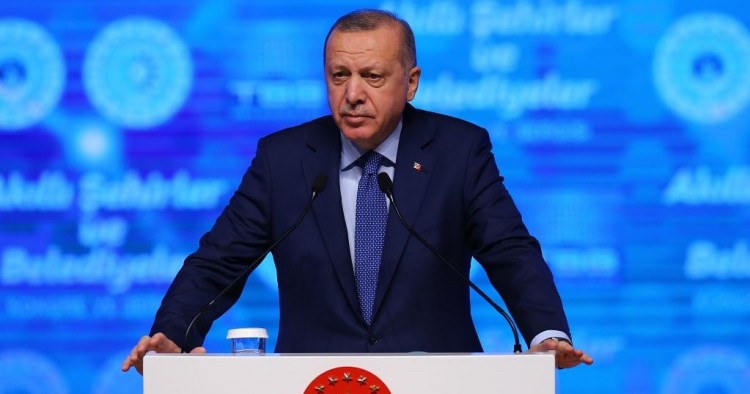 With its clash with Syrian forces on Feb. 3, Turkey is being forced to realize that it has very limited leverage over its foreign policy priorities. Even if Ankara succeeds in stopping the Syrian offensive in Idlib and persuading Moscow to broker a cease-fire, that will not solve the refugee problem or the ultimate withdrawal of Turkey’s fighters. Is Ankara really going to go to war against Damascus? And for what objective, since it knows that Moscow has no intention of sacrificing Bashar al-Assad in any peace agreement. As happened with Aleppo in December 2016, Turkey faces the unalterable fact that it cannot prevent Russia and the regime from ultimately prevailing. Will Turkey accept that reality or fight back to the bitter end?

Turkey’s previous and very recent foreign foray, this time into Libya, was originally designed to be seen in Ankara, the Middle East, and Europe as a new, confident, forward projection of Turkish power and influence linked to a maritime agreement with Libya dividing up most of the eastern Mediterranean. Ankara’s support for Tripoli’s government does not appear likely to transform its fortunes, however. Russia and others will continue to support General Khalifa Hifter, the military leader of the self-styled Libyan National Army. The notion of a virtual Ottoman empire, roundly denied by Ankara for years and mocked elsewhere by others, seems less and less likely to become reality.

There is no doubt that Turkey’s president, Recep Tayyip Erdogan, sees himself and his country as a rising power, with an expanded presence and certain ambitions to reach a new level of regional and global importance. He has had two main goals: (1) to create an independent status for Turkey regionally and ultimately globally, and (2) to secure a lasting domestic loyalty by showing his success in foreign affairs. Unfortunately, over the past 15 years, in interactions on the international scene, Mr. Erdogan has fallen short of the first goal and consequently endangered the second.

Turkey since 2016 has put most of its hopes on Russia. Yet Ankara has never succeeded in being important enough to Moscow to gain Russian support for its aims. Ankara joined the Syrian peace negotiations and invested heavily in trying to demonstrate that Turkey could be an equal partner. Turkey intervened in Syria in 2016, 2017, 2018, and 2019 to counter growing Kurdish influence and occupation of territories along the border in the hopes of persuading Moscow to accept the Turkish role.

Why did the effort not succeed? First, Russia was in Syria to ensure that Bashar al-Assad would win, whatever Turkey’s wishes. Turkey undermined its diplomacy by calling for Assad’s overthrow from the early days of the conflict, arming the opposition (including al-Qaeda-linked forces in that opposition), prioritizing the elimination of Kurdish forces over settling with Russia, occupying Syrian territory despite repeated calls by Russia, Iran, and Syria to leave, and rejecting any U.S. alliance that could have provided leverage on Moscow.

For the past three and a half years, Turkey has consistently sought to appease Russia to gain favors for its aims of exerting a major influence on the Syrian peace agreement and establishing superior influence in Syria south of the Turkish border, including rejection of any Kurdish military or political role in a final settlement. To this end, Turkey has embraced its own further dependence on Russian energy sources and presumably military defense equipment.

President Vladimir Putin of Russia has been masterful in using Turkey’s entreaties as openings to separate Ankara from the only military alliance capable of standing up to Moscow. Now Russia is ensuring that Syria will capture Idlib Province and expel hundreds of thousands more refugees and defeated fighters into Turkey. The real question now is how Turkey might be able to get out of the straitjacket into which it helped tie itself.

The U.S., accustomed historically to trying to instruct Turkey and often ignoring that country’s own concerns, and overly relying on the NATO alliance relationship, has disappointed Ankara on several fronts. First, the U.S. called for the removal of Assad as Turkey was trying to negotiate with Damascus, but declined to provide any muscle to ensure the Syrian dictator’s departure. Secondly, the Obama administration in August 2013 abandoned its “redline” on Syrian chemical weapons and remained mute as Ankara called for an international force to save Syria. Third, when Sunni extremists (ISIS) flooded into Syria from Iraq and from Turkey in the fall of 2013, the U.S. acted correctly to protect innocent Kurds but failed to do the admittedly hard work to give Turks an ally’s role in any dimension. Some creative diplomacy in 2014 and 2015 on joint operations in the air or on the ground might have helped. If Turkey was going to have to be accommodated in the end, why not do so before all the damage was done to U.S.-Turkey relations?

Turkey did nothing to halt the downward spiral, using the Americans as targets for their rampant nationalism, actions which all but compelled Ankara to keep increasing the decibel level of their rhetoric. Turkey first accused the U.S. of complicity in the attempted coup of 2016 (later publicly admitting this charge was untrue) and began to turn to Moscow based on Mr. Putin’s well-timed phone call of support in the early hours of the coup attempt. Now, Turkey is caught in a tangle of difficulties with the U.S. — including the F-35 fighter aircraft, Halkbank fraud, S-400 Russian missile defense system, House and Senate Armenian genocide resolutions, a sanctions bill that the U.S. president could execute at any time, a lost opportunity to do a large bilateral trade deal, and near-complete public disenchantment in America with their once strong and reliable ally. At best, the U.S.-Turkey relationship is on hold, but the odds of something happening to further roil the waters look high.

In its own backyard, Turkey has made little progress in winning other Middle East nations over to its views. Attempts to forge a positive relationship with Israel fell through after 2005, escalated in 2010 over a Turkish media-focused effort to break the Israeli blockade of Gaza, and are now in tatters after pro-Israel moves by the U.S. stirred up greater tensions in the region. The Ankara government’s devotion to its Muslim Brotherhood roots has set it against Saudi Arabia, the UAE, and Egypt, first over Egyptian President Mohammed Morsi’s overthrow, then over Iran, and now over Libya. Turkey’s attempt to isolate Saudi Arabia over Jamal Khashoggi’s assassination in Istanbul in 2018 foundered. Turkey’s maritime boundary agreement with Libya in November 2019 triggered widespread opposition from Egypt, Israel, Greece, and the EU. Turkey will not be able to prevent other nations’ actions in that space, and so has set up another confrontation in which it lacks the means to prevail.

It is true that the EU has no stomach for Turkish membership for the foreseeable future. Many Americans feel that this result was not inevitable. In 1999 and for several years thereafter, many felt there was an opportunity to make real progress. The Turks endorsed the UN Annan Plan referendum on Cyprus in 2004, but the Cypriots scuttled the deal. Today and for several years past, the rhetoric from Ankara about Europe, usually in threatening terms, sometimes almost to the point of attempted blackmail, persuades no one in Europe to look more generously on Turkey. There is no genuine leverage that Turkey has over Europe, since a massive expulsion of refugees would be seen as Turkey’s heartlessness, and there seems to be no desire to try to find an approach that would actually work.

Ankara’s government has announced expansive goals for Turkey. The country is well underway with an ambitious effort to build the most capable military force in the region. Turkey has bases in Qatar on the Persian Gulf, in Sudan on the Red Sea, and in Somalia facing the Indian Ocean and Africa. Turkey now is or soon will be producing modern tanks, armored vehicles, drones, warships, and submarines. It is constructing an amphibious assault ship with a frame capable of supporting an aircraft carrier. Turkey has declared that it wants to be among the top 10 global economies by 2023, the 100th anniversary of the republic. Today it is 16th or so, about the same position it occupied when the current government came to power. Ankara has floated its ambition to renegotiate the Lausanne Treaty ending World War I, criticizing the agreement as a giveaway by the Ataturk government. When discussing the UN Security Council’s permanent membership, Turkey’s position is that “Five is not enough.” Presumably, Turkey would be delighted to occupy a Muslim permanent seat in the event of an expansion.

At home, however, events have not been trending in the government’s favor. The ruling Justice and Development Party (AKP) now relies on a minority party to win elections and has seen two former party leaders depart to form their own parties. The government suffered a major loss in June 2019 when an opposition candidate was elected mayor of Istanbul by an overwhelming majority. The economy is under growing strain, there is increasing discontent over inflation and unemployment, and there is some distrust of the government’s financial reporting. An extravagant canal project to bypass the Bosphorus is drawing intense scrutiny over charges of environmental damage and corruption. Journalists and academics, not to mention liberal philanthropists and opposition political leaders, continue to bear the brunt of government suppression. Global opinion of Turkish justice is at rock bottom.

Mr. Erdogan is a master politician with many victories to his credit. He is intelligent, and he sensed from his early days that he could do much good for the millions of common people in Turkey. Once upon a time he demonstrated the combination of that skill and that vision and earned the world’s praises for it. Then came the hard times and the felt need to win at all costs because he was convinced that he was the only person with the answers. History rarely works that way.

In Turkey, the government is putting on a brave face, demonstrating abroad its own sense of confidence in its ambitions and belief in the power of its presence, actions, and words. Being assertive is one thing, succeeding is another. Populism and nationalism do not export well. The resplendent image is there, but in the outside world, there is the sense that perhaps for now Turkey is all dressed up with nowhere to go.

Ambassador (ret.) W. Robert Pearson is a non-resident scholar at MEI and a former U.S. ambassador to Turkey. The views expressed in this article are his own.