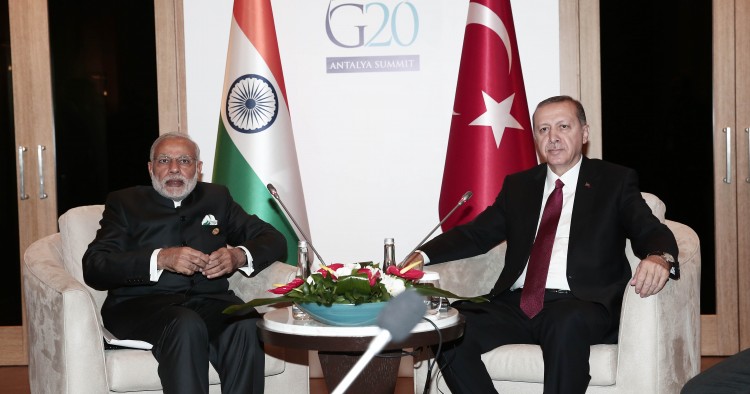 This essay is part of the series “Turkey Faces Asia,” which explores the development of cultural, political, and economic links between Turkey and the Indo-Pacific region. See more ...

Both Turkey and India are middle-income secular democracies with deep historical connections, leading one senior Turkish lawmaker recently to refer to the two countries as “natural allies.”[1] However, there has long been an impediment to developing more fruitful ties with India: Turkey’s pro-Pakistan orientation. The origins of this friction point date to the early 1950s, namely the inception of the Cold War and the early stages of the Indo-Pakistan conflict. This stumbling block has yet to be overcome. In fact, the “Pakistan factor,” specifically the Kashmir conflict, has lately resurfaced as a source of Turkey-India contention.

Turkey and India established diplomatic relations in 1948. However, during the ensuing four decades the two countries failed to develop a close partnership. Indeed, Turkey-India relations experienced sporadic tension, largely for two reasons. The first source of tension was Turkey’s pro-Pakistan position on the Kashmir issue.[2] The second was the differing Cold War strategic orientations, exemplified by Turkey’s membership in NATO and the Baghdad Pact, which contrasted sharply with India’s non-aligned posture and friendliness toward the Soviet Union.[3]

With the Cold War beginning to wane, the “pro-West” and “liberal” Prime Minister Turgut Özal sought to rebuild relations with India. Özal’s visit to New Delhi in 1986, during which the two sides agreed to open Defense Attaché offices in each other’s capital, was reciprocated by his counterpart Rajiv Gandhi two years later.[4] With the initiation in both countries of economic reforms, Turkey-India relations seemed poised for progress on multiple fronts. But the “Pakistan factor,” especially the Kashmir conflict, remained a vexing issue in Turkey-India relations. During the August 1991 convening of the Organisation of Islamic Cooperation (OIC) Foreign Ministers Meeting, Ankara condemned India’s use of force in Kashmir, placing a strain on the relationship.[5]

Over the next several years, the two sides reached agreement on avoidance of double taxation and tourism (1995), bilateral investment promotion and protection, prevention of trafficking in narcotics (1998), and an MoU between the Council of Scientific and Industrial Research and Turkish Scientific and Technological Research Institute.[6] However, efforts to deepen the bilateral relationship stalled.

A New Era of Engagement

Bülent Ecevit was the only Turkish Prime Minister who could reasonably be considered “pro-India,” primarily because of his disapproval of the coup d’état that had brought Pervez Musharraf to power in Pakistan. Ecevit, who travelled to India in April 2000 — the first such visit by a Turkish leader in 14 years — declined an invitation to include Pakistan on his trip. Importantly, prior to the Ecevit visit, Ankara had revised its traditional stance on Kashmir, from advocating a resolution to the conflict based on UN supervision to calling for a bilateral settlement of the dispute.[7] This change caused an upswing in Turkish-Indian relations.[8]

Prime Minister Atal Bihari Vajpayee’s landmark visit to Turkey in September 2003 steered the bilateral relationship in new and promising directions. In his keynote address to the Centre for Strategic Research of the Turkish Ministry of Foreign Affairs, Vajpayee laid out a rich menu of subjects on which the two countries could work together, including in promoting a more open and non-discriminatory global trade regime as well as collaborating in the development of Central Asian energy resources. During the visit, the two sides also pledged to establish a Joint Working Group on Terrorism.[9]

Boosted by the results of the Vajpayee visit, Turkey and India — two “rising middle powers”[10] — were on course to develop the multidimensional relationship that had previously eluded them. This positive momentum carried into the Justice and Development (AKP) era in Turkey. The ruling AKP had a strongly pro-EU and developmental agenda in its nascent stage and ambitiously tried to diversify Turkey’s trade network to escape the “middle income trap.” In this vein, India, a shining example of a rising economy figured to offer significant benefits to Turkey, while Pakistan appeared to offer far more limited gains. This impelled the AKP government to seek to deepen its economic cooperation with India, though without harming its friendly relations with Pakistan. The G20 international forum served as a useful platform for developing such cooperation.

In his 2008 visit to India while serving as Prime Minister, Recep Tayyip Erdoğan endorsed the Turkey–India Free Trade Agreement (FTA). The next year, Turkey's first nano satellite (ITUpSAT1) was sent to space on a PSLV C-14 rocket by the Indian Space Research Organisation.[11] Visiting India in 2010, then-President Abdullah Gül discussed cooperation with New Delhi in space research, biotechnology, and IT.[12]

Since then, the budding partnership has advanced most rapidly in the area of trade. In fact, the bilateral trade volume soared from $505 million in 2000 to $8.7 billion in 2018 (see Chart 1). In fact, India has become Turkey’s second largest trade partner in East Asia after China. Moreover, the volume of Turkey’s trade with India in 2019 was around $7.7 billion, far surpassing the trade conducted with Pakistan ($803 million).[13]

President Erdoğan’s 2017 visit to India underscored India’s growing significance for Turkish policymakers. The focus of the visit was largely economy, as the president was accompanied by a 100-member business delegation. During and since the visit, Ankara has showed interest in India’s “smart cities” initiative, hoping to capitalize on the expertise of Turkish firms in construction and in the infrastructure sector.[14]

Despite the recent gains on the commercial and other fronts, Turkey-India relations have continued to have their share of differences. Besides the yawning trade imbalance in India’s favor, political issues threaten to hamper the further development of the relationship. The political divergences between Ankara and New Delhi include the issue of the Gülen Movement, which Ankara declared as a terrorist organization in May 2016.[15] The Turkish government put pressure on the Indian government to close Gülen schools in Delhi and elsewhere; however, Indian authorities have demurred, demanding evidence from Ankara that would hold up in court.[16] Meanwhile, Indian officials have become increasingly concerned that the Turkish government intends to penetrate the country’s populous Muslim minority and use the Indian Muslim network for Pakistan’s benefit.[17]

Indeed, the issue of Pakistan still casts the largest shadow over the Turkey-India relationship. India’s exclusion from the Turkey-led dialogue on Afghanistan in 2010 and Ankara’s attempts to block India’s membership to the Nuclear Supplier’s Group (NSG), both allegedly due to Pakistan’s pressure, strained the relationship. [18]

Whereas Turkey and India had attempted to compartmentalize or insulate their relationship from their respective relations with Pakistan — and for a time appeared to have been relatively successful in doing so — developments have taken a turn for the worse over the past year.

Since India abrogated Article 370 of its constitution, which had given Jammu and Kashmir special status, in August 2019, Ankara has been raising the Kashmir issue in various forums. President Erdoğan first broached the issue at the UN General Assembly (UNGA) in September 2019. Indian Prime Minister Narendra Modi countered by holding meetings with the president of the Republic of Cyprus and prime ministers of Armenia and Greece on the sidelines of the UNGA. Modi later cancelled his planned visit to Turkey in October 2019 and a lucrative $2.3 billion naval deal with a Turkish defense company. In view of the burgeoning defense ties between Turkey and Pakistan, India cut its defense exports to Turkey while signing a $40 million defense deal with Armenia.[19] India also condemned Turkey’s military operation to Northern Syria in October 2019.[20]

During the very same time that Ankara’s relations with New Delhi have soured, Turkey’s ties with Pakistan have been upgraded to a strategic partnership.[21] What is perhaps of greater significance is the growing defense ties between the two nations. One of the primary purposes of President Erdoğan’s February 2020 visit reportedly was to “further synchronize military relations,” the latest indication of which is joint construction of modern warships.[22]

In his February 14, 2020 speech before a joint session of Pakistan’s parliament, Erdoğan stated:

We have never forgotten and will never forget the help, which the Pakistani people extended, by sharing their own bread during our War of Independence. And now, Kashmir is and will be the same for us. It was Çanakkale yesterday and it is Kashmir today, [there is] no difference.[23]

New Delhi responded to these remarks by issuing a strong demarche to Turkey’s envoy to India, stating that Ankara should not interfere in India’s internal matters.[24] The next day, the official spokesperson of the Ministry of External Affairs Raveesh Kumar added, “These remarks reflect neither an understanding of history nor of the conduct of diplomacy. They distort events of the past to advance a narrow-minded view of the present”; and warned, “These developments have strong implications for our bilateral relationship.”[25]

The “Pakistan factor” has always loomed large in Turkey-India relations, and remains the biggest impediment to the full flowering of the bilateral relationship. Since the end of the Cold War, Turkey has sought to expand economic cooperation with India though without sacrificing its relationship with Pakistan. In performing this balancing act, Ankara has had some success, primarily in the area of trade; however, there, too, problems such as the large imbalance in India’s favor have festered.

Over the past year, Turkey-India relations have soured, largely as a result of Turkey’s relations with Pakistan and reaction to Indian policies in Kashmir. Recent trends in the broader geopolitical landscape do not appear to bode well for the further development of Turkey-India relations. Border clashes between Indian and Chinese forces in May herald a period of intensifying Sino-Indian rivalry. The China-Pakistan Economic Corridor (CPEC) under the framework of the Belt Road Initiative (BRI) has, if anything, sharpened Indian-Chinese competition in South Asia. These developments will undoubtedly add a layer of complexity to Turkey’s efforts to consolidate its strategic partnership with Pakistan without alienating and thus stunting the growth of its relationship with India. Finding the right formula for neutralizing the “Pakistan factor” in Turkey-India relations will likely prove more, not less difficult under these circumstances.

[12] Government of India, Ministry of External Affairs, “Visit of H.E. Mr. Abdullah Gul, the President of the Republic of Turkey to India,” February 9, 2010, http://www.mea.gov.in/pressreleases.htm?dtl/1193/Visit+of+HE+Mr+Abdullah+Gul+the+President+of+the+Republic+of+Turkey+to+India.

[23] Quoted in “Kashmir as important to Turkey as it is to Pakistan, Erdoğan says,” Anadolu Agency, February 14, 2020, https://www.hurriyetdailynews.com/kashmir-as-important-to-turkey-as-it-is-to-pakistan-erdogan-says-152026.