Turkey back at the barricades 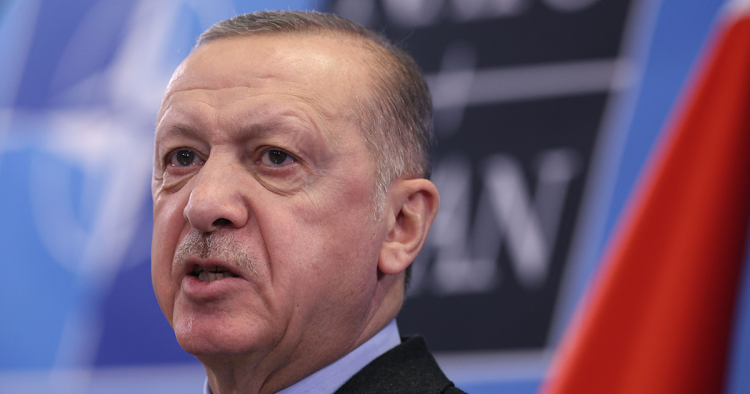 In recent months, Turkish President Recep Tayyip Erdoğan has been on a charm offensive. Turkey has reversed its negative views of the UAE, Saudi Arabia, and Israel in the hopes of securing investment funding, greater domestic support, and regional influence. The United States was included too by way of a Turkish request to buy upgraded F-16 fighters instead of insisting on receiving F-35s. Mr. Erdoğan volunteered to mediate between Russia and Ukraine. He even restarted a dialogue with Greece over bilateral issues, though it has not resulted in progress, and held talks with Armenia.

But that spring in Turkey’s diplomacy may now be reverting to winter as Ankara has blocked Swedish and Finnish accession to NATO even as a key arms deal is pending with Washington and U.S. relations with Greece are at a high.

Greek Prime Minister Kyriakos Mitsotakis met with President Joe Biden on May 16 at a time when Greece has the best relationship with the United States in years. An amendment to the U.S-Greece Mutual Defense Cooperation Agreement (MDCA) opens three new bases to U.S. forces. Greece also has granted permission to the U.S. to use the port of Alexandroupolis in the northeast as a supply center for U.S. aid to Ukraine. In addition, Greece has offered to become an energy hub for Europe to substitute for Russian gas by way of the Bulgarian-Greece pipeline and to join the F-35 consortium, stepping into the seat Turkey sacrificed. To cap off the Washington visit, House Speaker Nancy Pelosi invited the Greek prime minister to address a Joint Session of Congress on May 17.

The same day, Turkish Foreign Minister Mevlüt Çavuşoğlu arrived in the U.S. to negotiate Turkey’s purchase of the new and upgraded F-16 aircraft. This is the first of the agreed foreign minister-level meetings in the renewed Turkey-U.S. Strategic Dialogue. Washington appreciates the export of Turkish drones to Ukraine and wants to improve the relationship. The administration agreed in April to Turkey’s request to purchase 40 F-16 planes and 80 modernization kits for its existing fighters. Both houses of Congress now must approve the sale. Sentiment in both houses for Turkey is mixed, however. Congressionally mandated sanctions from 2020 on Turkey still apply, stemming from Ankara’s purchase of the Russian S-400 missile defense system in 2017.

On May 18 Finland and Sweden formally applied to join NATO, citing Russia’s invasion of Ukraine as Moscow’s rejection of any commitment to established borders in Europe and a direct threat. President Biden welcomed that application on May 19, meeting with Swedish Prime Minister Magdalena Andersson and Finnish President Sauli Niinistö at the White House. That same day as well as on May 13 and again on May 16, Mr. Erdoğan criticized the potential membership of both countries on the grounds of charges that they protect members of the Kurdistan Workers’ Party (PKK). Both Sweden and Finland previously have declared the PKK a terrorist organization. On May 18 in the NATO meeting in Brussels Turkey blocked a consensus on moving forward with membership.

Mr. Erdoğan has seized on what he sees as an opportunity. Turkey is calling on the Nordic nations to abolish what Ankara calls “terrorist organizations” and to lift bans on the export of arms to Turkey. He also wants both countries to extradite to Turkey named alleged PKK members.

Turkey is walking a narrow line. For now, NATO states are acting as if these difficulties will be settled. Turkey has a right to raise its concerns. Finland and Sweden have a right to explain their views. Delaying the membership process too long could escalate the level of NATO’s frustration with Turkey. Moreover, Turkey enjoys freedom from NATO sanctions on Russia. Turkey is benefiting from those exceptions financially and diplomatically by remaining officially neutral to Russia even as it supplies arms to Ukraine. Additionally, Turkey is no longer playing an active role as mediator. The real arrangement to settle the war will be up to Russia and Ukraine. Congress likely will hold up any approval of the F-16 deal until the obstacles to Swedish and Finnish memberships are removed.

Mr. Erdoğan has now added the United States to his list of countries to once again attack. The more the Turkish president feels empowered to criticize the United States and the administration that was willing to reach out to him, the less likely it is he will ever see the F-16s and the modernization kits. The longer he holds up approval of Finland’s and Sweden’s applications for membership, the more questions will arise about Turkey’s current role in the Russian war on Ukraine. Vladimir Putin has even said he is not opposed to these new memberships per se. If Turkey asks for too much, Ankara might lose much more than it bargained for.

Ambassador (ret.) W. Robert Pearson is a non-resident scholar at MEI and a former U.S. ambassador to Turkey. The views expressed in this piece are his own.