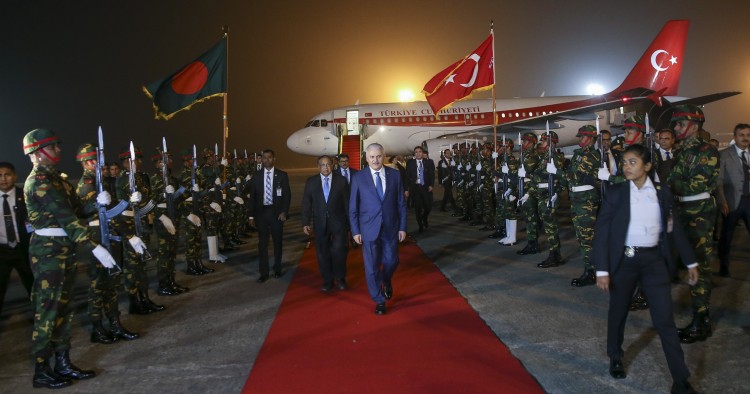 Roots and Early Development of the Relationship

Relations between the Turkish and Bengali-speaking peoples have strong historical and cultural roots, dating back to the late Ottoman period and decades before the founding of the People’s Republic of Bangladesh. The Muslims of South Asia, including the Bengalis, supported Turkey during the First World War (1914-1918) and the Turkish War of Liberation (1919-1922). The respect for Mustafa Kemal Atatürk, founder of the Republic of Turkey, is reflected in the epic poem “Kamal Pasha,” written by Kazi Nazrul Islam,[1] national poet of Bangladesh, in 1921. The father of the nation Bangabandhu Sheikh Mujibur Rahman was greatly inspired by Atatürk when he led the Bengali nation to statehood in 1971 through a war of independence.[2]

However, Turkey diplomatically and even militarily supported Pakistan during the Bangladesh Liberation War in 1971.[3] Following the war, relations remained complicated due to Turkey’s continued support for Pakistan. Turkey officially recognized Bangladesh on February 22, 1974 at the Organization of Islamic Conference (OIC) Summit, which was held in Lahore. Diplomatic relations between the two countries were established after an official visit by Bangladeshi President Ziaur Rahman to Turkey in 1976. The Turkish Embassy in Dhaka was opened that same year, while the Embassy of Bangladesh in Ankara became operational in 1981.[4]

After establishing diplomatic ties, Ankara-Dhaka relations flourished; and Bangladesh became a diplomatic ally of Turkey in international affairs. Dhaka was a staunch supporter of Turkish claims on the Cyprus issue during the 1970s and 1980s, and Turkey provided technical and financial assistance to Bangladesh during its state-building process and creation of a stable and sustainable national economic system. In 1983, a year after assuming power in a bloodless coup as Chief Martial Law Administrator (CMLA) and later becoming president, Hussain Muhammad Ershad invited Turkey to establish an airbase in Bangladesh to provide more security to the country. However, Ankara quietly declined. Yet, even though the project did not materialize, the offer indicated how the partnership between Ankara and Dhaka had become deep-rooted in a very short period.[5]

The visits to Dhaka by then-President Abdullah Gül and Prime Minister Recep Tayyip Erdoğan in 2010, which were reciprocated by Bangladesh Prime Minister Sheikh Hasina the next year, resulted in the establishment of the Turkey-Bangladesh Business Council and the development of a broad agenda for diversifying cooperation.[6] Bilateral relations progressed gradually in all fields and without incident until 2012.

From Political Setbacks to Revitalization

From 2012 to 2016, Turkey-Bangladesh relations were strained as a result of Turkey’s strong condemnation of the International Crimes Tribunal’s (Bangladesh)[7] indictment, conviction and execution of leaders of Jamaat-e-Islami, the country’s largest Islamist party. Turkey’s ruling Justice and Development Party (AKP), which adopted a political Islamist ideology in 2011, forsaking its liberal democratic stance, has provided support to the Muslim Brotherhood network across the world, including the Jamaat-e-Islami Party in Bangladesh.[8] Therefore, AKP leaders’ reactions to this tribunal were likely a function of their solidarity with the Muslim Brotherhood, and not consistent with Turkey’s established Kemalist foreign policy tradition.[9] In December 2012, President Abdullah Gül wrote a letter to his Bangladeshi counterpart Zillur Rahman, urging Bangladeshi courts to grant 1971 war suspects clemency. In the letter, Gül cautioned that, if these leaders were executed, Bangladesh’s socio-economic advancement might be adversely affected and social instability and bloodshed might ensue. A 14-member Turkish-Islamist NGO team that had arrived in Dhaka in December 2012 to monitor the International Crimes Tribunal was detained and subsequently deported by the Bangladeshi authorities.[10]

On May 12, 2016, President Recep Tayyip Erdoğan issued a scathing condemnation of the Bangladeshi government’s use of capital punishment against Motiur Rahman Nizami, head of the Jamaat-e-Islami Party.[11] The Anatolia Youth Association, an NGO of Islamist Saadet Party in Turkey, expressed similar outrage. Shortly after Erdoğan’s statement, Turkey recalled its ambassador to Bangladesh, precipitating a diplomatic standoff. Three months later, however, Turkey’s ambassador returned to Dhaka.[12]

Past Turkish governments had lodged protests in similar circumstances, as when Prime Minister Bülent Ecevit did all within his power — though without harming the overall bilateral relationship with Pakistan — to save Prime Minister Zulfikar Ali Bhutto from eventual execution in 1979.[13] In sharp contrast, the AKP government’s censure of the Bangladesh War Crimes Tribunal not only diverged from Turkey’s established diplomatic norms but also offended Bangladeshi government and public sensibilities.

A second source of friction in the bilateral relationship was the Gülen Movement’s activities in Bangladesh. After declaring the Gülen Movement a terrorist organization in May 2016,[14] the ruling AKP put pressure on the Bangladeshi government to ban it, close its businesses and institutions, and deport its activists. The Turkish Embassy in Dhaka designated Turkish-Bangladesh Chamber of Commerce and Industry (TBCCI) and the International Turkish Hope School (ITHS) — the latter having been established in Dhaka in 1996 and grown to six branches with 2,000 students, 33 Turkish and 210 local teachers — as Gülenist institutions.[15] TBCCI closed in late 2016.[16] Turkish Ambassador Devrim Öztürk asked the Bangladeshi government to hand over ITHS to the Turkey-backed Maarif Foundation. However, the Bangladeshi Foreign Ministry demurred, having regarded the request as a violation of diplomatic norms.[17]

Yet, despite the political setbacks experienced during the period 2012-2016, Bangladesh’s State Minister for Foreign Affairs Shahriar Alam left the door open for normalization.[18] The reciprocal visits of Bangladeshi President Md. Abdul Hamid and his Turkish counterpart Binali Yıldırım in 2017 are indicative of the healing of the relationship. Bangladesh Ambassador to Turkey Allama Siddiki recently described the current state of the relationship as the best it has ever been.[19]

Turkey’s response to the Rohingya refugee emergency has served as a vehicle to put the relationship back on a stable and productive footing. The October 2016 violence against Rohingya residents of Rakhine State in Myanmar triggered a mass influx of about 600,000 refugees into Bangladesh, in addition to an estimated 250,000 undocumented Myanmar nationals already present in the country.[20] Myanmar’s denial of citizenship and basic rights of the Muslim minority Rohingya of Rakhine State is the root cause of the problem.[21]

The Turkish government has mounted an active diplomatic campaign on behalf of the Rohingya and in support of Bangladesh in the United Nations, the G20, MIKTA (a middle power grouping consisted by Mexico, Indonesia, South Korea, Turkey, and Australia), the OIC, and other multilateral fora.[22] In September 2017, Emine Erdoğan, the president’s spouse, along with Foreign Minister Mevlüt Çavusoğlu and Family and Social Policy Minister Fatma Betül Sayan Kaya visited the Cox’s Bazaar refugee camps.[23] The Turkish Cooperation and Coordination Agency (TIKA), the Disaster and Emergency Management Authority (AFAD), the Turkish Red Crescent, the Directorate of Religious Affairs (Diyanet), and Turkish NGOs have constructed camps, hospitals, schools, orphanages, and facilities for refugees and the poor across Bangladesh.[24]

Turkey-Bangladesh economic relations, though promising, present a mixed picture. Turkey’s trade linkages with Bangladesh have grown rapidly in recent years, and annual bilateral trade volume has hovered at about $1 billion over the past decade. According to the Turkish Statistical Institute, two-way trade reached $858 million in 2018.[25] The textile industry has been a lucrative source of bilateral trade, as the Turkish carpet industry relies extensively on Bangladeshi jute.

As Table 1 indicates, since 2010 Bangladesh has emerged as Turkey’s second-largest trade partner of Turkey in South Asia after India.

Table 1. Turkey’s trade with Bangladesh, India, and Pakistan since 1980 ($ million)

Turkey has aimed to increase bilateral trade with Bangladesh to $2 billion by the end of 2020.[26] However, this target seems unrealistic, given the slowdown of the Turkish economy and the fact that the bilateral trade volume has been stuck at around $1 billion since 2010. Ankara and Dhaka attempted to forge a free trade agreement (FTA) in 2012 to augment the economic partnership, though ratification was suspended indefinitely due to disapproval from the European Union (EU), which sought to protect its Customs Union with Turkey.[27]

Turkey’s development assistance to Bangladesh during 2004-2014 totaled about $13 million.[28] In 2012, the Turkish Cooperation and Coordination Agency (TIKA) — Turkey’s flagship development agency — opened a program coordination office in Dhaka, which laid the groundwork for the initiation of projects in the health, education, and vocational training sectors.

However, foreign direct investment (FDI) inflows in both directions are unremarkable. According to the Central Bank of Bangladesh, net FDI inflows in the fiscal year 2015-2016 from Turkey to Bangladesh was $1.41 million (i.e., 11.8% of the country’s total FDI stock as of June 2016).[29] Shipbuilding and pharmaceuticals are two sectors where the two countries could pool their investment capital.

Similarly, people-to-people exchanges, which are sparse, could use a boost. For instance, the number of Bangladeshi visitors to Turkey was only 1,979 in the first ten months of 2018. The number of Bangladeshi travelers to Turkey is less than one thousand. [30] It seems that Ankara and Dhaka should do more to develop a comprehensive plan to upgrade their current economic partnership to a new stage.

Since the signing of a military training agreement in 2004, Bangladesh-Turkey defense cooperation has progressed. In recent years, Bangladesh has purchased military equipment and arms from public and private Turkish defense companies.[31] Defense links between the two countries have been further strengthened through training programs and military exercises.

More than 3,000 Bangladeshi military officers have received training in Turkey.[36] Bangladesh’s navy has developed particularly close ties with its Turkish counterpart. Turkey, along with South Korea and the United States, provides military training to the SWADS, Bangladesh’s most sophisticated naval unit.[37]

In February 2019, the Bangladeshi National Security Advisor to the Prime Minister’s Office Tarique Ahmed Siddique and Chief of Army Staff of Bangladesh General Aziz Ahmed, as well as a 31-member team participated in the Turkish military’s Multinational Winter Exercise KIS-2019 held in Turkey.[38] These are all encouraging signs of the healthy development of Bangladesh-Turkey defense cooperation.

With the exception of the years 2012-2016, Turkey-Bangladesh relations have been cordial and cooperative. Now, these two newly emerging economies are seeking to develop more intensive cooperation with each other. This will require that Turkey and Bangladesh find ways to  boost people-to-people contacts and invigorate FDI. Even in the area of trade, there seem to be stumbling blocks to realizing the ambitious targets the two sides have set. However, if Ankara and Dhaka approach the bilateral relationship with an eye toward developing a comprehensive partnership, they might be able to leverage their increasing cooperation in the defense sector to stimulate economic activity in other areas. The next five years will be critical in determining whether this is likely, or even possible.

[4] Ministry of Foreign Affairs of the Republic of Turkey, “Turkey-Bangladesh Relations,” http://www.mfa.gov.tr/turkey%E2%80%93bangladesh-relations.en.mfa.

[7] This was a domestic crimes tribunal established in 2009 by Bangladesh to prosecute suspects for the genocide committed in 1971 by the Pakistan army and their local collaborators.

[21] Bangladesh Foreign Secretary Md. Shahidul Haque’s briefing on “migration governance and the Rohingya crisis” in Ankara on May 19, 2019, The Turkish Center for Asia-Pacific Studies, http://www.asianpacificcenter.org/apac-news-in-2019.html.