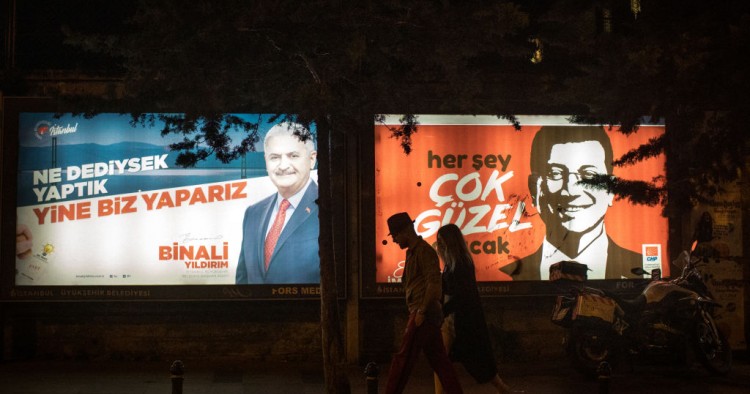 In theory, Sunday’s election is over who will be the next mayor of Istanbul, but in reality it’s about something much bigger: The survival of democracy in Turkey. The Justice and Development Party (AKP), in power since 2002, is now stumbling. It depends for support on a narrowly based ultranationalist party with no hope of ever winning a national majority itself. The economy is spiraling downwards, caught in an undertow of financial mismanagement and the illusion, often appearing in desperate times, that printing more money and handing out free credit will somehow solve the problem. In foreign policy, the chute is narrowing. From Europe, Turkey badly needs investment and trade, but Ankara can only bear to give the continent the minimum courtesies and continues to pile up human rights abuses that alienate Europeans. In Syria, Russia is slowly tightening the vice on Turkey, inevitably and inexorably forcing it to leave Syrian territory and likely receive a new influx of hundreds of thousands of refugees. Its al-Qaeda-linked ally there faces a stark dilemma as well, with no place left to go. In northeastern Syria, the U.S. cannot give Turkey what it wants: Control of the border and domination over the Kurds. Whatever temporary accommodation might be achieved through the current herculean efforts of the U.S., one day all Syria is likely to be under the control or management of Damascus.

Since the U.S. is not going to start a new war, and Russia is not going to stop the one underway until Damascus has won, the outcome in the end is rather clear. The Americans have tried in every possible way to find a means of cooperating with the Turks without asking Washington to surrender entirely to Turkish demands, and Ankara seems either not to understand or not to care. Thus, the U.S. is prevented from doing what it could do best for and with Turkey, and that is to work for Turkey’s future security after the Syrian war.

The AKP’s march from victory to victory over the past 17 years presents an impression at first of unassailable strength. No other political movement in the world has matched its remarkable success. Somewhere along the way, however, power became more important than the rights and the prosperity of ordinary people, and the cadre who in 2002 collectively saw a new vision of Turkey at peace with democracy and the Islamic faith found themselves pushed aside, accused of treason, stripped of influence, and now regarded as enemies. In the early years of the AKP’s success, the party’s new ideas and devotion to cleaning up the banking system and to clean government were admirable. But as time has passed, more and more effort has been applied to maintaining its power — more enemies had to be found, more foreign powers had to be blamed, and more of the people’s needs had to be sacrificed to retain the party’s hold. The day may finally arrive when those great convictions that attracted so much support in the beginning no longer offer lasting returns; their values become stranded; and the cost of going forward far exceeds the likely benefit.

After the March elections, the government in Ankara applied repeated pressure until a new election for Istanbul’s mayor was announced. The city controls nearly 70 percent of the nation’s wealth and fills the party’s coffers. If the AKP wins by a large majority on Sunday, only the party will believe the result is legitimate. Even if it wins by a narrow margin, no one else will believe the outcome was fair. If the AKP loses, it will be humiliated, and the troubles that have beset it will reappear in magnified form. In short, whatever the result, the AKP will have gained little and perhaps lost much. Its assets seem already played out, and the party can expect to gain no more lasting support than it has now.

Mohammed Morsi, the only democratically elected president of Egypt, died this week and was eulogized in Turkey. The irony of Mr. Morsi’s democratic election is that he also was the president who destroyed democracy in Egypt. The great advantage for Turkey is that democracy has been at work in Turkish society for nearly a hundred years — or even longer if one considers the reforms undertaken at points in the Ottoman Empire. However laborious the task, the Turkish people have never given up on their devotion to a country whose government is the servant of the people, not the other way round. However Sunday’s election turns out, democracy may still hold its head high.

Ambassador (ret.) W. Robert Pearson is a non-resident scholar at MEI and a former U.S. ambassador to Turkey. The views expressed in this article are his own.